Allow me to start with a confession.

I like proverbs. They are gems of thoughts expressing, in a nutshell, truth about reality. No wonder, Mesrop Mashtots, the creator of the Armenian Alphabet at the dawn of the 5th century A.D., chose the Book of Proverbs to start his major task of translating the Holy Bible into the Armenian language. Hence the first sentence ever appearing in Armenian letters was this beautiful phrase from the original Syriac of The Proverbs (1:2)

(In King James Version: To know wisdom, and instruction; to perceive the words of understanding.)

I acknowledge therefore the wisdom of considering any truthful and beautiful thought to belong to all humanity.

A beautiful Chinese proverb advises, “A picture is worth ten thousand words.“ I have prepared 50 slides for you to enjoy and appreciate the creative output of a major Armenian woman artist who lived and worked in London during the first half of the 20th century. The slide show will then be worth half a million words. Yet, the same proverb wryly reminds us further, “but you need words to say that.” Hence, before letting you enjoy the slide show, I shall say few words.

At this point, I am well aware of a brilliant Latin proverb that gently but firmly warns anyone daring to use words for others to hear, saying: “ Aut tace, aut loquere meliora silentio”, meaning, in plain English: “Keep silent unless what you say is better than silence”.

I do hope that what I am saying and shall continue to narrate about the literary and artistic milieu and phenomena of Zabelle Boyajian, will live up to that advice.  ZRead More >>>ZABEllINA   (pdf)

She was the “Splendid Armenian Woman”, the “Never-to-be-forgotten Zabelle Boyajian”. With these and similar phrases some of the major Armenian intellectuals of the first half of the 20th century, such as Arshag Chobanian and Avedik Issahakian, expressed their genuine admiration for this multi-talented artist par excellence. Both Chobanian and Issahakian also shared copious correspondence with Boyajian

Born in 1872 at Diarbekir (one of the ancient Armenian capitals, Tigranakerd), Zabelle was the daughter of an Armenian Protestant clergyman become the British Vice-Consul at Diarbekir. Her mother was an Englishwoman, a kinswoman to the poet Samuel Rogers (1763-1855). After loosing her father during the genocidal massacres of mid 1890s in Ottoman Turkey, Zabelle continued her education in London, and there she settled till the end of her flamboyant life as a creative and performing artist.

AGBU did not fully oblige to Seza’s request. No publication of Zabelle’s complete works ever appeared then and neither thereafter. Even today, more than half a century later, Mrs Seza’s perceptive request and genuine wish remains unfulfilled.

But AGBU did embark on a worthy project–the republication of one of Zabelle Boyajian’s major works, the Armenian Legends and Poems, just one year after Seza’s eulogy. Here is the FOREWORD of that AGBU Jubilee Publication of 1958. Therein we find a judiciously delineated raison d’être about the quality of a choice that eventually served as a memorial to Zabelle herself:

ZABELLE BOYAJIAN’s Armenian legends and Poems was hailed with enthusiasm when it was first published in 1916. The passing of more than four decades has not diminished its value as a comprehensive chrestomathy of the legends, folklore, and poetry which constitute the permanent treasures of our cultural heritage.

The Armenian general Benevolent Union is fully convinced of the intrinsic value of the book, both for our American-born youth and other English-speaking Armenians, among whom there are unmistakable signs, of an increasing awareness of our historic past, and for scholars and historians who are engaged in research on the art, folklore, and culture of the Armenian people. Therefore, in recognition of the notable service rendered by Miss Boyajian to our art and literature, it is republishing this monumental book as a part of its Jubilee Program.

The late Zabelle Boyajian, painter, poet, and a keen student of historic values, prepared this book during one of the most tragic and agonising periods in our recent history. Wholesale massacres were then destroying helpless and defenceless people by the hundreds of thousands; deportations were uprooting the survivors from their ancestral homeland and scattering them into the Arabian deserts.

But through all these persecutions and ordeals, the Armenian people, once a proud and independent nation, survived and kept alive its Christian faith, its ideal of freedom, its culture, and its spiritual values.

Limitations of space and the scope of the book forced the author to omit some of our famous contemporary poets who lived and created prior to and following the great catastrophe. However, such commissions in no way detract from the value of the volume, and we share the author’s prophetic conviction that “Armenian Muses have still many treasures in their keeping which cannot be destroyed.”

The book also contains a study of Armenian legends and poetry by Aram Raffi, son of the foremost Armenian novelist. Mr. Raffi’s scholarship has provided a valuable addition to Miss Boyajian’s work.

We believe that no further justification is needed for the republication of Zabelle Boyajian’s Armenian Legends and Poems, which, more than any other of the author’s works, will keep her name alive.

ABELA accomplished the task but with a difference. Zabelle’s Boyajian’s Armenian Legends and Poems is now ‘resurrected’ in a much accessible format than the original of 1916 and the AGBU republication of 1958. Zabelle’s Armenian Legends and Poems is now a paperback– a handy quasi pocket book. But, alas, the illustrations are not ‘resurrected’ in their original glorious colours. These are now in their black and white dimly presence. Is that the ‘price paid’ for its accessible format?  Who knows!

Strange as it might seem, the only colourful illustration is that of the Armenian national tricolour flag on the front cover. Moreover, the tricolour’s presence is ‘accompanied’ by the reproduction of the Republic of Armenia’s coat-of-arms on its penultimate page (275), as if we have in hand a pocket book of ‘Tourism in Armenia’ and not a book of a poetic promenade through the Armenian cultural heritage that it certainly is. Perhaps both intentions could have been served, and graciously so, if Zabelle Boyajian’s book was ‘resurrected’ to mark an anniversary of the Third Republic of Armenia.

It might be argued though that the philanthropic intention of ABELA PUBLISHING  “to help the underprivileged in Armenia” through “a percentage of the net sale of this book” (back cover notes) did jump the queue of all the above considerations, having thus decided to dedicate the paperback “To The Undying Spirit of Armenia” (front-page iii).  Then, we might as well say—fair enough and happy ‘resurrection’ to Zabelle of 1916 in paperback.

Published in the ARMENIAN VOICE, the Newsletter for the London Armenian Community. 2010, No. 57

Zabelle Boyajian; Life and work of an artist, poet, translator and an activist

Tribulations of a nation and the response of a valiant intellectual

Literary and artistic valour of a legendary volume

Miss Boyajian, the authoress of this book, is the daughter of an Armenian clergyman, whom I knew and respected during the many years when he was British Vice-Consul at Diarbekir on the Tigris. She is herself a painter, a member of that Armenian artists some of whom have, like Aivazovsky and Edgar Chahine, won fame in the world at large, and she is well qualified to describe with knowledge as well as with sympathy the art of her own people.

Her book of “Armenian Legends and Poems” shows that she possesses the poet’s art in a remarkable degree, with all the true poet’s dreamy idealism and his deftness in the manipulation of words. But in the present volume she shows a very special qualification for dealing with such a legend as the Epic of Gilgamesh, that is to say, a natural instinct and personal feeling which enables her not only to weave words, but to infuse the spirit of the old Sumerian narrative into her verse. […] The coloured pictures with which Miss Boyajian has illustrated her work bear evidence that she has studied the art of the Babylonian seal-cylinder and of the Assyrian bas-relief, and of the antiquities in bronze from Urartu, or Armenia, her native land; and assuredly they illustrate the text in a remarkable degree. […] And the present volume seems to me to be one of the very few in which poetry and art act as each other’s handmaid with conspicuous success.

Keeper of the Egyptian and Assyrian Antiquities at the British Museum 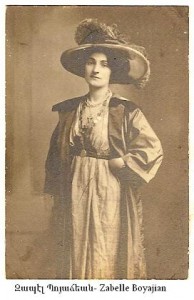