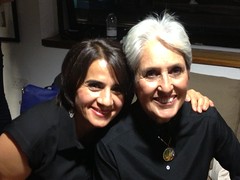 The Legendary Joan Baez, with her acolyte Aygul Erce in London

Many are the classically trained opera singers that sing in languages which are not their own mother-tongue.   But rare is the ‘foreign’ singer whose articulation is as good as the native speaker, and even rarer is the one whose command of the foreign tongue even surpasses that of some native speakers… There are for example some Pakistanis in Britain, who manage to speak better … Cockney than English native cockneys!

Ms Aygűl Erce, the Kurdish folk singer based in London, it seems – I am assured by Professor Hovhanness I. Pilikian, an Armenian philologist (masters 8 (+) ancient and modern languages, among other disciplines he dominates, as a unique Polymath) enunciates in Armenian better than most Western Armenians fragmented world-wide, assimilated in disappearing Diasporas …

This is not surprising – as a classical music composer himself, the Professor had recognized a massive talent in Ms Erce (classically trained as an opera-singer), and had recently taken her under his wing, translated personally into literary Armenian (in a way that is understood by both Eastern – the Republican – and Western Diaspora Armenians) one of Ms Erce’s famous songs, originally in a double version of Kurdish & Turkish.

The Professor’s ‘musically’ fitted translation (I am told by Armenian friends) is “a glorious mixture of both literary Armenian dialects”, almost a perfect “new language”; for example, “Yess hakin em vznots-s” = I am wearing my scarf/necklace.  In grammatical form, the sentence is in Eastern Armenian, but perfectly legible in content for Western Armenians, with the added ambiguity of the scarf meaning as well a necklace. There are magnificent puns in the line “Vostikanner@ ints bantetsin” = the police (also the soldiers) jailed (but also killed/murdered) me; s-bannel echoically (the sound from the two words) = murder, kill.

The deliberate de-politicization of the Pop-world by the American ruling elite over several decades now has finally succeeded in inventing a fantasy drug-fuelled world of no more than androgynous male singers (mostly gay) usually singing in Beatles-type of falsetto, and female pop-divas, their lyrics emptied of all serious content, are left with nothing else to do but sell their boobs-and-butts for the cocaine-addled delectation of the Wall Street Bankers playing casino-games with the world’s money…

Gone are the days, when the legendary Bob Dylan and Joan Baez could raise global consciousness against the War in Vietnam and topple official America’s drunken tipplers!

Idolizing Joan Baez as an artist, Ms Erce’s surplus-value is that, she is preserving and modernizing Ms Baez’ tradition of writing politically humanitarian protest-songs, shaming the evil doers of this world, and displaying compassion for the underdog, the unfairly abused, and the masses lacking any social justice, oppressed by ruthless and brutal governments, lacking any human decencies.

And here is her best hitherto – titled Puşe = Scarf – about a young, totally innocent (presumably Kurdish) university student, waiting at a bus-stop, to catch the bus to go to his Uni …  instead, the ‘Americanized’ brutalized genocidal Turkish police arrive – they arrest him, beat him up with their batons, throw him in jail, all because he happens to wear the … Palestinian type of large scarf worn by the Intifada-youth … The Kurdish student is put on trial, as in Kafka’s novel, never knowing why, his university cut off, his dreams of a noble career destroyed … And all for what? For wearing a Palestinian Arab-style scarf…

The story is totally true, and was reported at the time in the Turkish press, inspiring Ms Erce to her most melodious and easily remembered, heart-breaking song … I never tire of hearing it a dozen times at a time – it is so very sadly beautiful.

Professor Pilikian it seems has personally coached Ms Erce, working meticulously on Ms Erce’s Armenian enunciation, but especially musically on a selective translation that takes into account the complexity of the song’s political themes and their profoundly evocative semantic dimensions, frequently rendering explicit what is implicit in the original – for example, by describing the scarf with a single word (“Palestinian”), Professor Pilikian has instantly linked (and very succinctly I think) the struggles of the two oppressed peoples, whose lands are unfairly conquered by the oppressors; Kurdistan by the Turks, and Arab Palestine by the Israelis.

Two extremely rich moments in the narrative of the song is when Professor Pilikian with a philologist’s masterly use of language, contextually vibrates with a single word several socio-political layers of references;

(1) “Anonk ints voghchagizetsin”= they {the brutal genociders} holocaust-ed me”, referring easily to the Nazi genocide of the Jews, and

(2) In the main refrain of the song – “O yaman, yaman, yaman”, mourning in his prison cell, and bewailing, the young student remembers heartbreakingly his mother (“Oi mama-s, mama-s, mama-s), apologizing to his mother for causing her grief (by the use of the possessive “s”), while expressing longing for her maternal love and warmth.

“It was not at all difficult to work with Ms Erce”, the Professor tells me humbly, “She is pitch-perfect – very rare even among experienced opera-singers, a fount of melodious harmonies and her lyrics are always deeply significant, highly political, profoundly compassionate and humanitarian.  Her musical phrasing is smooth and tuneful, richly and memorably tuneful – in other words, a second JOAN BAEZ indeed! No wonder the legendary Ms Baez is Ms Erce’s ideal and idol. I was very pleased when on a recent appearance of Ms Baez in London, Mr Mark Spector, Ms Baez’ perceptive and sensitive agent performed the impossible miracle – upon my recommendation, he kindly arranged for the star to meet her young acolyte, hence this most beautiful sisterly picture, published here for the first time!!!”

Ms Erce was so pleased with the result of her work with Professor Pilikian, that she told me she already feels like an … Armenian, and she is almost certain now that she must have had an Armenian grandmother … at least she knows that her husband does, indeed her Kurdish husband had discovered some time ago that he had an Armenian grandmother, like many Kurds nowadays re-discovering their Armenian progeny!

“In today’s Turkey”, continues the Professor, a distinguished historian as well, “so many Turks and Kurds have had the courage to come out of the woodworks and claim their part-Armenian heritage – it has become almost trendy to claim an Armenian connection…

“And imagine, Talaat Pasha – the Ottoman Minister of the Interior – with Enver & Djemal – the Young Turk Triumvirate, who planned and organized the genocide of 2 million Armenians, hyenas who fed on the Armenian corpses they had murdered in 1915, had bragged to the American Ambassador in Istanbul Henry Morgenthau, that he was determined to leave only a single Armenian, for a taxidermist, to stuff it for a Museum as a sample of the race… the proto-Nazi idiot must be turning in his rotten grave and “stinking up to heaven” (as Hamlet’s uncle says) hearing of several million modern Turks being proud of their Armenian grandmothers – almost a ‘new race’ in formation I call “Armeno-Turks” !!!  History shall never be on the side of genociders”.

Indeed, I could not but agree fully with Professor Hovhanness I. Pilikian, a man who knows history full well, born of the generation who (the Professor’s parents) as children had miraculously survived the genocide of the Armenians perpetrated by the Turkish ruling elite.