A Concert of Deep Human Love, Genderless and Ageless 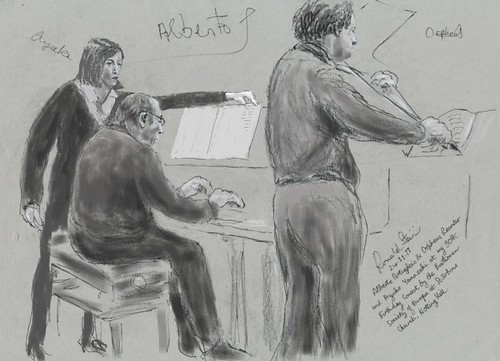 A Concert of Deep Human Love

Lucky are those who are known by the great Concert-Pianist, Maestro Alberto Portugheis, Pedagogue, Musicologist, Founder and Chairman of the Beethoven Society, a Nobel Peace Prize nominee, and a Global Disarmament Peace-Campaigner (Founder of HUFUD), and author of two books on the artificial political impossibilities of achieving world peace…

Ronald Stein, a distinguished friend of mine (and Alberto’s), turned a healthy 90 on the 24th of November.  Ronald draws masterly black-and-white Portraits of music-makers in-action, which is a kind of new form in the history of painting.  During the Renaissance times, the subjects were expected to sit still for long hours, possibly without batting an eyelid … but not with Ronald, who captures character while his subjects perform in concert.

Ronald was crestfallen when the incomparable Maestro Alberto decided to dedicate a tribute concert to celebrate his 90th Birthday.

And what emerged was an extraordinary evening of pure, unadulterated, unconditional, profound love of compassionate humanity that is genderless and timeless.

The young violinist was Orpheus Leander, an Athenian very much deserving the honour of his first name!

The first piece was Mozart’s Sonata Bb Major K454 – a most unique musical event, especially within the oeuvre of Mozart himself, who is mostly expected to be light and cheerful and full of humour most of the time.  But Lo and behold, this Sonata begins with a largo, sad though sweet; a dynamic sign usually preserved for funeral marches…  hardly in a few bars, the rhythm suddenly changes into a fast Allegro, full of the typical Mozart zest for life and joie de vivre! It seems that Mozart was in a tragic mood for a second (reminding me of the first movement of his end-of-life Requiem), but here, suddenly something extraordinary must have happened, which changed Mozart’s mood palpably … As to what?  We shall never know, but the impact is there in this Sonata imprinted forever!  This instant micro-second change of mood was so strange that I thought for a moment it could have been an objectionable misprint.  But checking the score itself with the Maestro, I finally accepted its extraordinary veracity – hardly ten bars of a beautiful largo…  What followed was a harmonious complimentarity of instrumental behaviour, the piano refusing to accept its traditional role as an accompaniment, jockeying for an independent status, pinching the lead, forcing the violin to accompany… it, the Violin sometimes kindly, sometimes seductively mirroring the piano’s themes – For whatever reason, Orpheus’s violin was subdued and ultra-gentle, very cautious.   But he suddenly burst into virtuosic flames in Ginastera’s Pampeana No 1, Rhapsody for Violin and Piano where one could hear the Amazonian forest come alive in bird songs, glissando twitters, the morning-chorus of the Birds, each species trying to find its own ‘family’ with its own distinctive sound … Ginastera’s violin transforming cleverly its glissandi into deep, baritonal ‘cello’ notes… a whole Vivaldi season converted into Jungle life.

The Soviet Armenian composer Aram Khatchaturian was the greatest single influence on Ginastera’s works – here are the virile rhythms of Khatchaturian’s  Violin Concerto blossoming into the awakening of Jungle-Nature, giving Orpheus‘ violin a chance to display its confident clarity of diction, articulation, proving that Orpheus Leander was ready indeed to tackle any classical concerto, from Beethoven to Tchaikovsky … It was sheer joy to witness Orpheus go from a timid Mozart to an assertive virtuosic Khatchaturianesque Ginastera …

Beethoven’s Sonata in F Major Op 24 sealed the deal between the Piano and the Violin.  While in Mozart, they were still competing for individual dominance, in Beethoven, the love deal between equals is the starting point, after initial greetings between traditional roles – rendering this Sonata almost into a Love Poem – a most beautiful memorable melody is launched by the Violin; the Piano replicates it, supports it emotionally, allowing the violin to develop it into a Duet, not leave it merely as a piece for piano accompaniment, but full on love-bonding, hand-in-hand, as they preserve their instrumental individuality, peppered with little games of hide-and seek … equal in power, the instruments use the main melody (in allegro) as a secure base to return to;  In the Adagio molto espressivo, the couple are in bed, in tender foreplay, weary, languid, followed by a brief scherzo, where the male-violin tries to make her, the piano, laugh by clowning and monkey-business … in the final rondo, the woman-piano is all very satisfied, rejecting the male-violin’s pleas for another bout, reducing the violin to niggling pizzicato …

Men never grasp, that, when a woman (be her a … Violin or a Cello!) is sexually gratified, she does not seek repeats … the nymphomaniac is no more than a male narcissistic fantasy.