FREXIT? The “Gilets Jaunes” will Not Let Go 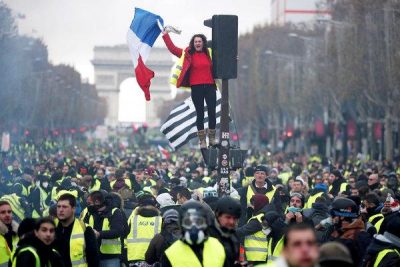 Will France, under Macron – Implosion 2 – become a candidate for exiting the EU thanks to the Yellow Vests?

The “Gilets Jaunes” will not let go. Not even – or especially not – after Macron‘s half-hearted, rather cynical and grandstanding concessions – of “too little and too late” – which when analyzed constitute a new lie, especially regarding the increase of the minimum wage. It was clear from his face, these concessions, of a President who campaigned on the basis of “never make any concessions”, were fake, as fake as his fake attitude of an apologist could be. Even without listening to his words, his body language of arrogance gives him away.

This past weekend, on Saturday, 15 December, another more than 100,000 Yellow Vests were marching on Paris; countrywide some 200,000. The police to oppress them, as officially reported, was about the same as the weekend before, 8,000 in Paris, close to 90,000 throughout France. Military assistance was not missing. Besides, in a state of emergency, who distinguished between police and military?

Interestingly, the international press – the MSM – is taking it seriously. Why? They fear that this relentless movement may spread to other countries, even countries beyond Europe – like “Trump Land”, the United States of America. And why not. The same malaise of capital being shifted upwards to the detriment of the poor and middle class exists everywhere, may even be most pronounced in the US, but nobody talks about it and pays attention to it, lest the people would have awakened to the growing disparity long ago – and taken to the streets massively – within the inner circles of the Washington Belt Way.

Chapeau to the French. Although their forefathers were among the most vicious and miserable exploiters,  in human history – when they ravaged for hundreds of years West Africa – and the elite still does, unbeknown even to (most) of the Yellow Vets.

Is this movement going to change the future – the future of Europe, the future of the values of the western world, that has been so adamant in propagating neofascist ideas – that they have become the new normal; in most people’s brains? There is a saying: “When fascism comes again, it will not come saying I’m the new Fascism; it will come saying, I’m the Anti-Fascism”.

Isn’t that already true when you look at todays Europe, what is called the EU – The European (non) Union (as I call it)? – And it includes even those countries – Switzerland and Norway – not EU members, but which are ever faster moving to the neoliberal right. Let alone those (still) 28 EU countries, like, Italy, Spain, Portugal, Ireland, Germany, Holland, where political parties have been divided, splintered to pieces, so that the oddest combinations of ‘coalition’ governments have to govern, mostly in an ungovernable fashion. It’s a success for the over-arching elite, call it the world’s dark and deep state – that is behind it with priceless media lies and propaganda, social media, Cambridge Analytica and the like. Anybody with common sense has no saying, simply because the money is on the other side.

And that money is endless, as it still stems from the FED, or better even, from private banks, that produces it at random with every loan they make, new cash is created. There is enough liquidity, as needed for their purpose, i.e. the propaganda war machine. Though, not much longer. The dollar hegemony is on its last stretch. Yes, we have been saying this for a while – but what is a “while” in geopolitics and in geo-time spans? – A few years, are a few seconds. The alternative – the Eastern Block, SCO (Shanghai Cooperation Organization), the Eurasian Economic Union, the newly created Caspian Sea Association of the five Caspian riparian nations (Azerbaijan, Iran, Kazakhstan, Russia and Turkmenistan). This association just signed an important deal under which they are sharing the tremendous wealth under the sea, i.e. 50 billion barrels of oil and just under 300 trillion cubic feet of natural gas.

Read More: The Eurozone in Crisis: The Greek Elections, An Opportunity of the Century, A Gateway for Europe

The Eastern Block allies are working on getting their solid act together, mostly based on the little mentioned (in the west) China’s President Xi’s initiative, the New Silk Road, or the Belt and Road Initiative (BRI) – a China-sponsored economic program that will encircle the globe with infrastructure, research, transport lines, industrial development, cultural exchange, education and friendly trade. But no offensive, war-like industries.

BRI advances are fast and solid. They are unstoppable. Once they are well established and many western countries are highly eager to join the initiative – the western economy will sing its Swan Song.

Seeing Macron from this perspective, he is just a little boy and a little full of himself, having been implanted by the foremost western banking clan, the Rothschild family, to help salvage what can be salvaged, i.e. milk to the bones the French and by association, the European Social system what’s left of it. Greece was a test case. And look at Greece – the Elite is still so greed-driven that they ‘d rather salvage their billions stashed away in Swiss banks, instead of showing some integrity and out of solidarity tell the EU and its fake currency the Euro, to go to hell. No, they won’t. Greece could have been an example for the rest of Europe.

Greece on her own, with their local currency the Drachma, local public banks for the development of the country, would today be on the way to prosperity, with jobs for most people, with an economy that could feed everybody and with a health care and education system that would bring up a new generation of Greek politicians – Greek politicians, who like after WWII displayed a solidarity that made them exemplary for many European countries.

With all the lying, miserably lying European statistics that Greece is now recovering and improving and that Greece is becoming autonomous and can borrow directly from the capital markets again – people are still dying from lack of medication, of medical care, of famine, of lack of shelter, especially in the winter – and of ever-increasing suicide rates. That’s Greece, the Troika’s (EU / EC; ECB, IMF) example of ‘salvation’.– Last Saturday, what looked like an endless crowd of ‘gilets jaunes’ was marching down Champs Elysees, in the front with a huge French flag. Stamped on the left on the blue strip of the flag was “1789”, in the middle white strip was “1968” and in the red strip to the right, was inscribed “2018”. An interesting – and indeed ambitious and bold allegation to the legendary 1789 storm of the Bastille, that changed world history. The current set-up of the EU certainly does not belong to anything called a “revolution”. It rather must be dismantled under a revolution.

These days simultaneous protests take place in Victor Orbán’s Hungary; in Belgium, with the Prime Minister, Charles Michel, having just resigned, leaving again a country without a government. In Germany, Merkel is slowly fading away – but who will follow? – In Italy, Deputy, PM Salvini, of the junior partner of the popular (not the derogatory ‘populist’) coalition, the extreme right-wing Lega Norte, is calling the shots – and they are clearly as anti-EU as can be. At issue is foremost Brussels unilateral meddling in Italy’s budget, while other countries, like France, who have been running budget deficits for years, are getting away with a soft call to attention (Macron naturally is Brussels Holy Child). – Will Italy succeed bringing and end to this unholy non-Union?

Then there is BREXIT, leaving Theresa May hanging on a cliff – of, say, no-return? She may not survive. Who will follow her. The madman Johnson? – The pressure of his rightwing supporters may be such that he has no choice than calling another referendum. And we can only guess with the propaganda of the Washington apologists and Atlantists how that will end. – Would a new no-Brexit vote, reversing the past two years of negotiating to zilch, cause an internal revolution? An internal collapse that could no longer stand up to the demands of Brussels, even with a manipulated “stay” vote?

The likely truth is that the Yellow Vests will mean the end of the very short-lived arrogant Macron era – and – who will replace him? – There is nobody prepared for it. The left-wing Mélenchon, good ideas, but conveys bitterness, has no charisma – and the right-wing Le Pen – is, though joining the left in extremis, aiming at getting out of the EU and of the Euro, but other than that, it’s outright fascism, ready for an alliance with Kiev. – Who else? – Chaos in the making, a good basis for a revolution, a revolution that may bring about more than meets the eye – a Europe-wide upheaval that brings back local sovereign states (whether Greece wants it or not!) with local money and local public banks that work for the public and for the local economy rather than for international profit and greed minded shareholders.

Wouldn’t that be a real revolution? – It would open the gate to Russia, Eurasia, China – the New Silk Road, a gate to a “New Deal” of the 21st Century, a New Deal of Inclusion from Europe throughout Asia and Africa. Think about it – the map surely shows a super Continent that hardly needs transatlantic relations, especially not those that the masters in Washington propagate – their rules, their guns, their dictate, their monetary hegemony. No thank you, West. And good riddens, Macron.

Peter Koenig is an economist and geopolitical analyst. He is also a water resources and environmental specialist. He worked for over 30 years with the World Bank and the World Health Organization around the world in the fields of environment and water. He lectures at universities in the US, Europe and South America. He writes regularly for Global Research; ICH; RT; Sputnik; PressTV; The 21st Century; TeleSUR; The Vineyard of The Saker Blog, the New Eastern Outlook (NEO); and other internet sites. He is the author of Implosion – An Economic Thriller about War, Environmental Destruction and Corporate Greed – fiction based on facts and on 30 years of World Bank experience around the globe. He is also a co-author of The World Order and Revolution! – Essays from the Resistance.

Peter Koenig is a Research Associate of the Centre for Research on Globalization.