Britain supported Iran’s new Islamic regime in crushing the last remaining opposition to its rule in 1983 while the UK’s leading official in the country joked about Iran’s torture techniques, declassified files reveal.

The UK’s secret intelligence service, MI6, worked with the CIA to provide a list of alleged Soviet agents in Iran to Ayatollah Khomeini’s theocratic regime, which took power after the overthrow of the UK-backed Shah in 1979. The information was used by the regime to execute leading members of the Iranian communist party, the Tudeh.

The British files also highlight how at least one Foreign Office official considered how the UK might benefit from the forced confessions given by Tudeh members at the time, which were believed to be extracted under torture.

The files suggest British policy was motivated by the desire to curry favour with Iran’s new rulers, rather than concerns over Cold War geopolitics or Soviet influence in Iran, which was recognised to be minimal.

The list of Iranians allegedly working for the Soviet Union in Iran was provided to Britain by Vladimir Kuzichkin, a major in the KGB who defected to the UK in June 1982, as reported by the New York Times and London Times in 1986. The information gleaned by MI6 from Kuzichkin – who was responsible for maintaining contacts with the Tudeh party, the main leftist organisation in Iran established in the 1940s – was also shared with the CIA, and passed on to Tehran.

The Iranian regime proceeded to round up over 1,000 members of the Tudeh party and eventually executed as many as 200. The party was banned and forced underground.

Britain’s senior official in Iran at that time, Nicholas Barrington, states in his memoir that Kuzichkin’s information simply “found its way” to the Iranian authorities after the Russian’s defection, without specifying the British role.

Files from the time – when Barrington was head of the British Interests Section in Tehran since Iran and the UK had cut full diplomatic relations – suggest that British officials supported Iran’s repression of the Tudeh. 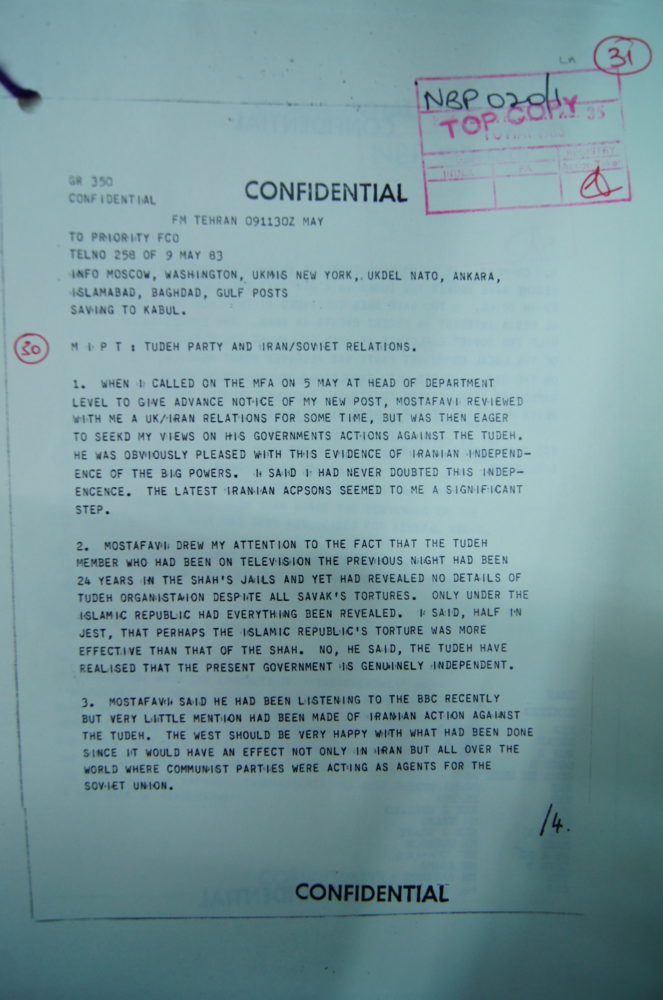 Telegram from Nicholas Barrington, the UK’s senior official in Iran, to the Foreign Office in London, 9 May 1983. (National Archives)

As Iran’s crackdown was under way, Barrington met a senior Iranian official on 5 May 1983 seeking British views “on his government’s action against the Tudeh”, which, he said, was evidence of “Iranian independence of the big powers”.

Barrington replied, according to his memorandum on the meeting: “I said I had never doubted this independence. The latest Iranian [actions] seemed to me a significant step.”

The Iranian official then mentioned to Barrington a “confession” forced by the new regime which had aired the previous night on Iranian television by a Tudeh member who had previously been jailed for 24 years under the Shah. The activist was said by the Iranian official to have previously revealed nothing “despite all the Savak’s tortures” – referring to the former regime’s brutal security service.

Barrington commented: “I said, half in jest, that perhaps the Islamic Republic’s torture was more effective than that of the Shah.”

By this time, Barrington and other British officials were well aware of Iranian repression. On the same day he met the Iranian official, Barrington had informed the Foreign Office in London of the “destruction of the Tudeh”.

He noted that “it is widely believed that some [Tudeh members] have already suffered the death penalty and the rest will do so soon”. He added that “the public have been taking the law into their own hands” in dealing with Tudeh members and “no doubt scores will be settled and some comparatively innocent will suffer with the guilty”.