The ceasefire agreement with Azerbaijan comes with great risks for Armenia 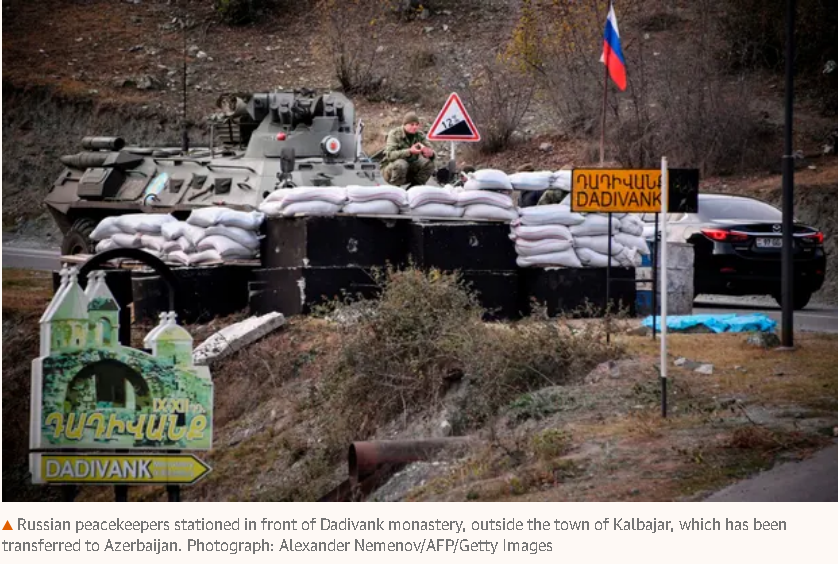 While Azerbaijanis can rightly celebrate a return to homes they were driven from 30 years ago, Armenian culture is in peril

The ceasefire brokered last week between Azerbaijan and Armenia has largely been cast as a means to end a decades-long territorial dispute. But, of course, reality might not be as smooth. In a region every bit as geopolitically fraught as the Balkans, the Caucasus has always been a patchwork of peoples pulled and shoved between greater powers, suffering successive waves of conquest and “ethnic cleansing”.

Zoom in more closely right now, though, and while Azerbaijanis can rightly celebrate a return to homes they were driven from 30 years ago, for the Armenian people at large, the risks could not be greater.

In signing the ceasefire agreement, Armenia has agreed to progressively hand back to Baku territories around Karabakh that it has occupied – militarily – since the 1990s. Culturally, though, it’s not so simple. The people living in these parts have, not all but in large part and since antiquity, been Armenian. It’s why they fought for independence in the first place.

They call the enclave Artsakh. Its deep-cut valleys and mountain ridges are dotted with more than 3,500 monasteries, churches, distinctive Armenian khachkars (cross stones) and gravestones. In addition to this Armenian Christian heritage, there is a wealth of pre-Christian sites and a smaller percentage of Muslim monuments, all of which have been meticulously listed. Teams are now scrambling to compile an official list of what exactly is in the districts to be handed back to Azerbaijani control.

Because, when it comes to Armenian heritage, Baku has terrible form. A report by political analyst Simon Maghakyan and anthropologist Sarah Pickman last year presented extensive details of what they termed a 30-year campaign by Azerbaijan of comprehensive “cultural cleansing” in Nakhichevan, the other territory the two states previously disputed. Satellite imagery, extensive documentary evidence and personal accounts showed that 89 churches, 5,840 khachkars and 22,000 tombstones were destroyed between 1997 and 2006, including the medieval necropolis of Djulfa, the largest ancient Armenian cemetery in the world.

The Azerbaijani response has consistently been to simply deny that Armenians had ever lived in the region. And that is precisely what observers fear will now happen across Artsakh, too. Last week president Ilham Aliyev tweeted, “Karabakh is ours! Karabakh is Azerbaijan!”, and his officials denied the historic Armenian nature of the region’s most fabled treasures. As Armenians removed bells, crosses and khachkars for safekeeping from the ninth-century Dadivank monastery in the Kalbajar district, Azerbaijan’s deputy culture minister, Anar Karimov, commented that these removals were illegal – and those items were actually Albanian.

From the 1950s, in a bid to establish links to antiquity and bolster claims of indigeneity, Soviet Azeri scholars embraced a revisionist cultural theory that drew a line between the Turkic Azeri people and Caucasian Albania, a country to the north of the Kura river. Specialists, including Danish archaeologist Carsten Paludan-Müller (a member of the Cambridge Heritage Research Centre), say that the theory is baseless. And the Dadivank monastery’s own walls suggest as much. While, according to archaeologist and Yerevan State University professor Hamlet Petrosyan, not a single Caucasian Albanian inscription has been found in Artsakh, this monastery alone is clad in more than 100 inscriptions in Armenian script.

There have been instances of monuments being Albanised (with the Armenian inscriptions removed) but doing so at Dadivank simply would not be practicable – and wouldn’t be a guarantee of the monument’s ultimate safety anyway. Experts point to the town of Agulis in Nakhichevan, and its cathedral, all of which was methodically laid to waste by the Azerbaijani military, starting in 1997. Paludan-Müller is sure we will see something similar again. “It’s going to be very difficult to avoid the destruction,” he says. “And there is a risk now that Nagorno-Karabakh will lose its Armenian population.”

Conflict in the region has deep roots. More than a third of the current Turkish population descends from the muhacir, the Muslim refugees (primarily Russian, Balkan and Caucasian) who fled persecution as the Ottoman empire collapsed. Europe and Russia’s involvement – and converse support for the Christian Greek and Armenian communities – is a humiliation that Turkey, as Paludan-Müller puts it, has never forgotten, and with which the Azeris identify.

The Armenian diaspora’s strong presence in the US, France and other western countries after the 1915–22 genocide only exacerbates the Turkish sense of a western or Christian bias towards Armenians. Moreover, Armenian scholarly emphasis on the Azerbaijani identity as a 20th-century construct belies the fact that the Azeri language, too, has ancient, pre-Turkic roots.

At the same time, Turkey andAzerbaijan deny the Armenian genocide, which saw up to 1.5 million Armenian people killed in Anatolia. And though ancient Armenian populations inhabited an area stretching from the Mediterranean to the Black and Caspian seas, it was Turkish policy until the mid-20th century to destroy Armenian heritage throughout its territory, and erase them from their maps.

In the decades following the emergence of the Karabakh liberation movement in 1988 and the first Armenia-Azerbaijan war in 1992, Armenian presence in Artsakh has engendered a remarkable body of scholarship. Art historians have delved into the wealth of illuminated manuscripts dating back to medieval Armenian monasteries; the particular regional iconography on the carved khachkars; the unusual, vaulted single-nave churches.

There was also Petrosyan’s discovery, in 2005, of the first-century BC Hellenistic city of Tigranakert and the exceptional raft of subsequent findings – agate gems, glass amphoriskos, painted burial amphoras, fourth-century Sasanian seals, a curious church entrance layout that connects it to ancient Jerusalem, and cave sanctuaries that connect it to ancient Greece. Petrosyan warns that this heritage has been targeted in the recent conflict.

His grief and anger are palpable – but with little hope that the situation will improve. The Djulfa cemetery, after all, was a Unesco-listed world heritage site before it was destroyed. “We have had neither military nor political clout. There is no difference between Azerbaijan wiping out our people or our culture. We are our culture.”