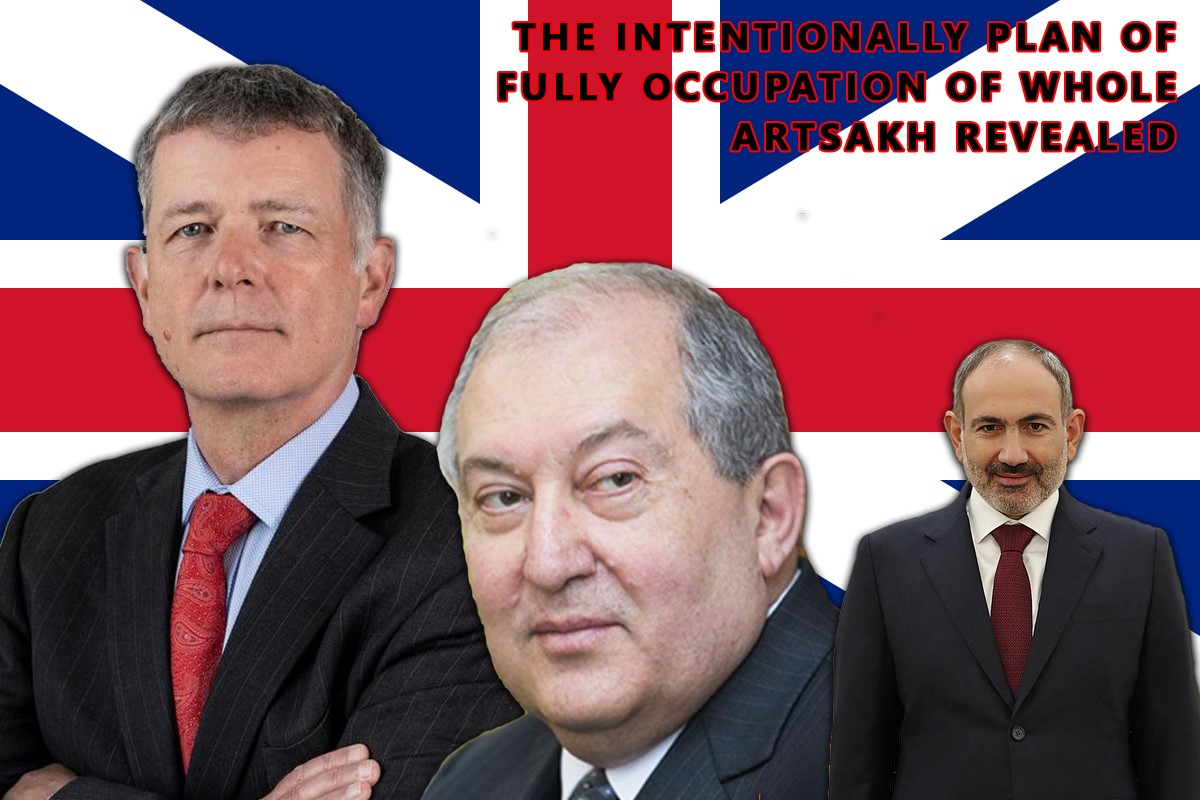 According to reliable sources, the goal of the war against Artsakh (former Nagorno-Karabakh Republic) was the following.Azerbaijan had to carry out a blitzkrieg to completely occupy Artsakh in a few days.

At the same time, certain forces in Armenia should have to support it, suspending for some time the process of sending volunteers to the front, sending weapons and ammunition, rejecting the proposed options for resolving the conflict, and rejecting the involvment of Russian armed forces in resolving the conflict.After the complete capitulation, the Artsakh issue would be completely closed. Then it was planned to carry out a propaganda attack, to blame Russia for the defeat, to provoke anti-Russian sentiments, as a result to decide to withdraw the Russian military base from Armenia, to terminate the CSTO membership, to immediately change Armenia’s foreign policy towards NATO.After that, the United States and Great Britain would take full control of the South Caucasus and could start the construction of the Great Turan without major obstacles and implement large oil and gas projects.However, due to the courage of the Armenian officers and soldiers, the war was extended to one and a half months. During that time, the treacherous orders of the highest authorities, the insults of the Artsakh officers and generals in strange circumstances became so obvious that many experts-thinking people are convinced that a systemic betrayal had taken place.

That is not the betrayal of 1-2 people, but the betrayal of a whole group of people with a preliminary agreement.What group of Armenians was interested in handing over Artsakh and changing Armenia’s foreign policy towards NATO?Political scientist Sergey Kurghinyan claimed that Erdogan, Aliyev and Pashinyan were directed by Chief of the British Secret Intelligence Service MI6 Richard Moore. However, all those who have a good understanding of Pashinyan’s inner essence, the average scale of his personality, will immediately notice that he is left out of the list of the above-mentioned three persons. Pashinyan is too small figure to be directly guided by the British MI6 Chief Richard Moore.Nikol Pashinyan is not independent and not competent politician and he must be constantly prompted to do something. And Moore would hardly call him five times a day to tell him what to do.

Nikol Pashinyan needs a serious, intellectual and experienced curator. And if that curator constantly directs Nikol, the head of MI6 will no longer need to have direct contact with Pashinyan. Especially since Nikol Pashinyan could not understand correctly what Moore was ordering him, he would have taken the wrong steps. It is more logical for Moore to keep in touch with Pashinyan’s experienced mentor. And in that case, it turns out that this curator would be the person who would carry out the tasks set by the head of British foreign intelligence in real time.Who in Armenia can be such a big figure to be guided by MI6 leader Richard Moore? Looking at the whole staff of the Armenian Government, one can see that there is only one such person. That is President of Armenia Armen Sargsyan.Let’s consider some interesting episodes of Armen Sargsyan’s biography.

• Armen Sargsyan was born in 1953 in Yerevan. After his father’s death, he was brought up by world-famous Soviet Armenian spy Gevorg Vardanyan (this is a very important fact).

• In 1981 he became a candidate of physical and mathematical sciences.

• In 1984 he was invited to Cambridge University, which was quite strange for the Soviet era.

• 2013 (for several months) was a member of the Board of Directors of Lydian International (Amulsar’s gold mine operator).

• On April 9 of 2018, Armen Sargsyan held the post of the President of the Republic of Armenia.And now let’s analyze this information. An experienced counterintelligence officer would consider the following.Young Armen Sargsyan, communicating with a famous spy, listening to his stories, learned many interesting things about the secrets and methods of intelligence, but, unfortunately, he did not take the high moral qualities of Gevorg Vardanyan.During his time in Cambridge in 1984-1985 (or perhaps earlier), Armen Sargsyan began cooperating with the British MI6 intelligence service. That is, from the beginning of Gorbachev’s reconstruction program, he was sent to the USSR, where he did his non-stop work at the Faculty of Theoretical Physics until 1992, that is, until the „collapse“ of the USSR. It is a perfect disguise, it could not be found better.

Moreover, in 1992, the lecturer was suddenly appointed ambassador, not in for exmaple Zanzibar, but immediately in Great Britain. It is clear that it happened as a result of some merit he had, but not for Armenia, but for Great Britain. And what he had towards Great Britain? Probably, he had his contribution in the „collapse“ of the USSR. And what started the chaos in the USSR from? Chaos began with the rise of nationalist movements, the emergence of conflicts between peoples, republics and regions, as a result of which the USSR began to crack from within.

The first in that series of clashes was the Armenian-Azerbaijani conflict, the massacres of Armenians in Sumgait on February 27-29. In September 1988, armed clashes broke out between Armenians and Azeris, which turned into a long-running conflict.

Maybe Armen Sargsyan was one of the „patriots“ sent from abroad, who provoked in every way to make the clashes more acute. And there is no doubt that there were such provocateurs sent by the Azerbaijani side, who provoked extremist moods, carried out the massacres of Armenians. In other words, the MI6 British intelligence officers sent from abroad to provoke targeted clashes.Thus, in all probability, the President of the Republic of Armenia Armen Sargsyan has been an employee of MI6 British Secret Service since 1984 and has a great work experience. He has intellectual, analytical qualities, loyally serves the Queen of Great Britain, behind whose shoulders there are many geopolitical operations carried out for the benefit of Great Britain.

Some claim that it is even considered as a pearl within the British crown. He is a member of the British Masonic lodge and has close relations with people such as Henry Kissinger and Prince Charles.And so, the operation to take Armenia to NATO is led by a highly experienced British secret service employee, RA President Armen Sargsyan. It is noteworthy that in 1996-1997, when he was prime minister, he tried to return Artsakh to Azerbaijan so that Armenia could later join NATO.

Against that background, he even had a sharp conflict with Vazgen Sargsyan, who slapped him hard. Today Armen Sargsyan is making his second attempt. By the way, according to some information, Armen Sargsyan is a co-owner of some Azerbaijani oil fields. So he is personally interested in implementing British projects in the region.In the first stage, Armenia’s position in the CSTO was weakened, relations with Russia and Iran were damaged, and the Union of Yerkrapah Volunteers was taken under control. In the second stage, the peace talks entered a deadlock, and Nikol Pashinyan provoked a war with his statements. The third stage was carried out during the military operations, the culmination of which was the surrender of Shushi.But since the hostilities lasted for several weeks, it allowed Vladimir Putin to find an optimal solution to the situation, using pressure on the conflicting parties to insist on the signing of an agreement and the entry of Russian peacekeepers. As a result, the plan to take Armenia to NATO failed. And this is due to the Armenian soldiers and officers and the talent of Vladimir Putin.It turns out that President Armen Sargsyan, his accomplices in Armenia, are the people who knowing in advance that a surrender of lands of Artsakh was planned before and sent thousands of Armenian soldiers to the death. Armenians will never forgive it.

So far, the whole torrent of accusations is directed at Nikol Pashinyan, but Armen Sargsyan’s name is heard more often. The truth is gradually coming to the surface.We should not be surprised if it suddenly turns out that the weapons that came to Armenia from Russia were sold to Turkey, and the money from the Diaspora went to the accounts under the control of Armen Sargsyan. The anger of people will grow and it will soon become clear that this operation was the biggest failure of Armen Sargsyan’s life.The people with label of traitors on the fronts will not be able to rule the country, no propaganda machine will be able to remove that stigma from them. And very soon the geopolitical owners of those people will understand that these people have become a burden for them and huge resources will be required to „cleanse“ those people.The conflict with the people will turn into the fact that ordinary people will begin to understand more and more clearly that the gang of traitors is supported not only by the authorities, but also by the special services of powerful powers. And when it becomes clear that the United States and Great Britain are behind those traitors, people will finally turn their backs on them. So, the traitors will not be able to stay in power for a long time, but they will not be allowed left in Armenia either, because in that case they will be prosecuted and who knows what they will say. And this is not at all beneficial for the owners of the traitors. But where can traitors escape? Wherever they go, there will always be Armenians, for whom they will forever remain as traitors.