Turkey Recruiting Syrian Jihadists from Afrin to Settle in Artsakh 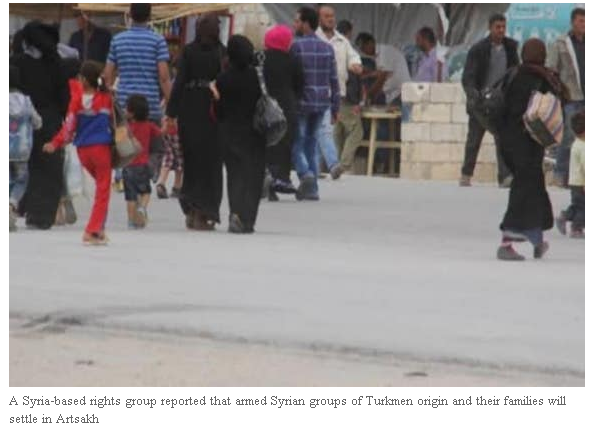 Turkey has begun registering ethnic Turkmens from the Afrin region of Syria with the aim of settling them in Artsakh in territories that were surrendered to Azerbaijan, according to the Human Rights Organization-Afrin-Syria.

Azerbaijan’s president, Ilham Aliyev, had said on numerous occasions that the territories that were ceded to his country, after the now infamous November 9 agreement, would be resettled by Azerbaijanis who were allegedly displaced during the Karabakh War in the 1990’s.

It seems, however, that the Ankara-Baku axis has other plans for those Artsakh territories, while Moscow sits idly taking credit for ending the 45-day war, which began when Azerbaijani forces, aided by the Turkish military and Ankara-backed jihadists began a brutal attack on Artsakh on September 27.
“Turkey is opening two offices in Afrin to register those Turkmen settlers wishing to be resettled in Artsakh,” said the human rights group in a post on Facebook.

The group said that several corroborating sources had confirmed that the Turkish authorities that are currently occupying the northern Syrian region of Afrin are specifically registering ethnic Turkmens who have long lived in the region in an effort to settle and transport families to Artsakh.

According to the human rights watchdog, the effort is being coordinated by Turkish Intelligence Service and the terrorist Grey Wolves gangs who are predominantly pro-Turkey armed factions of Turkmen origin, such as Sultan Murad, Suleyman Shah, al-Hamzat groups, all of which reportedly sent jihadists to fight alongside Azerbaijani forces in the 2020 Karabakh offensive.

The number of Syrian militants sent by Turkey to Azerbaijan has reached 4,000, the Syrian Observatory for Human Rights, another watchdog group, reported last week. The group said the militants are being recruited in Afrin and in the cities of northern Syria controlled by the Turkish army and the pro-Turkish militias, after being assembled and trained in special camps inside Turkish territory.

Meanwhile, the Afrin-based human rights organization’s sources have that the first office registration office is located in the former center of the Popular Credit Bank in the old Afrin neighborhood, which is not being used as a Turkish intelligence headquarters. The second registrations center is located in what was once a Kurdish printing house located next to rite Al-Shifaa hospital, the main hospital in Afrin, which is also being operated by Turkish intelligence service.

“Eyewitness accounts say that the two offices witness a turnout of Turkmen families, especially those Arab bedouins from the Syrian province of Homs who claim their Turkish roots, indicating that family data are taken in preparation for transferring them to Azerbaijan to replace forcibly displaced Armenian natives of Artsakh region,” said the Human Rights Organization-Afrin-Syria.

The sources also identified a man going by the name of Abu Tharwat, a well-know local Turkish intelligence agent from the Azaz region is running the first office, “while the second office is run by the so-called “Khiru,” who is a Turkmen from one of the villages of al-Raai subdistrict of Azaz next to the Turkish border, north of Syrian city of Aleppo.”

The Syrian Observatory for Human Rights, which is based in the United Kingdom, first reported the Turkish plan to settle Syrian mercenaries in Artsakh last week.

The director of the observatory, Rami Abd al-Rahman said in a television interview last week that the Turkish offer was presented to the Turkmen militiamen because Turkey claims that their origins go back to “those areas in the Caucasus.”