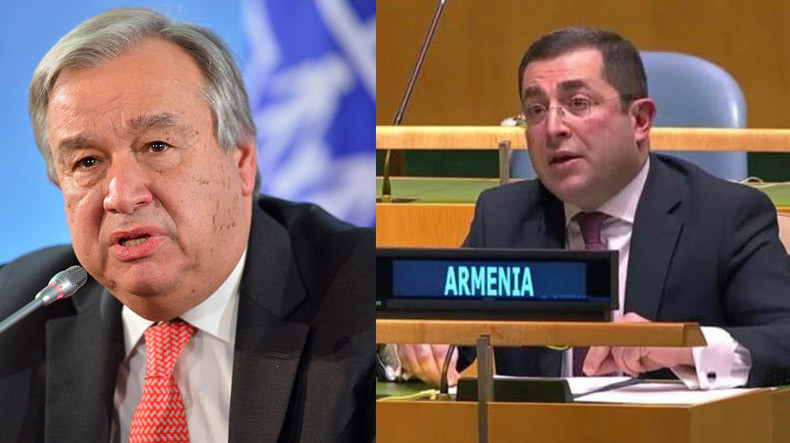 Permanent Representative of Armenia to the UN Mher Margaryan addressed a letter to UN Secretary-General António Guterres regarding Azerbaijan’s persistent, gross and systematic violations of the Charter of the United Nations and the norms and principles of international law in the context of the maintenance of international peace and security.

“Azerbaijan has repeatedly demonstrated a blatant disregard towards its pre-eminent obligation to strictly adhere to the principles of non-use of force or threat of force and the pacific settlement of disputes by opting, instead, for instigation of violence, conflict and atrocity crimes in relation to the people of Artsakh (Nagorno-Karabakh),” the ambassador said.

He stressed that the authorities of Azerbaijan consistently promoted the language of threats, fueling ethnic hatred and propagating war and violence against Armenians. In doing so, the leadership of Azerbaijan “sought to push for a deceptive, victim-blaming narrative on the basis of misplaced, manipulative invocation of the concept of “self-defense” as a purported justification for military action.”

“Videos of public executions, mutilations, inhuman treatment of prisoners of war and civilian hostages and other atrocities have been widespread in online media.

“Despite overt, unconcealed glorification of violence, sponsoring of international terrorism and genocidal ideology, both Azerbaijan and Turkey have been increasingly seeking to manipulate the right to “self-defense” to cover up Azerbaijan’s criminal conduct. Much to the embarrassment of those behind this fabricated argument, it must be clearly stated, however, that, in the case of Azerbaijan, neither the conditions of “self-defense” nor of “pre-emptive self-defense” are applicable,” Margaryan stated.

He called attention to Azerbaijan’s widespread acts of atrocity crimes.

“In addition to the direct explicit evidence of genocidal intent, as communicated by Azerbaijan’s and Turkey’s leaders themselves, Azerbaijan’s goal of ethnically cleansing the indigenous Armenian population in Nagorno-Karabakh may be inferred from Azerbaijan’s commission of the following atrocity crimes: (1) inhuman treatment, torture, executions and beheadings of captive Armenian civilians; (2) torture, beheadings and mutilations of prisoners of war; (3) widespread destruction of civilian infrastructure; (4) destruction of cultural and religious heritage; and (5) hate speech by the Azerbaijani political leadership and public figures encouraging identity-based crimes against Armenians,” the letter said.

The top diplomat highlighted that throughout its 27 September to 9 November 2020 offensive against Artsakh Azerbaijan deliberately targeted civilian sites.

“Moreover, Azerbaijan’s atrocious treatment of Armenian prisoners of war – including mutilation, torture and beheadings – belies any “self-defense” argument. These are not acts of self-defense but acts of genocidal intent. As reported by several international sources and as documented in the Ombudsman’s reports, Azerbaijan committed multiple acts prohibited under the Third Geneva Convention, such as executions of Armenian soldiers by gunfire, decapitation of Armenian prisoners of war, deliberate execution of injured, non-resistant wounded soldiers, brutal execution of an alive, captured person, mutilation of the bodies of dead Armenian soldiers 10 and other inhumane acts and atrocities.

“The genocidal intent does not stop at the bodies of ethnic Armenian civilians and prisoners of war; it also seeks to destroy Armenian cultural heritage, while erasing any evidence of the more than 2,000-year-old Armenian civilizational presence. Notable examples of such cultural erasure involved the shelling of the Tigranakert archaeological site, the best-preserved city of the Hellenistic and Armenian civilizations of the Caucasus, as well as the targeted destruction of the Armenian cathedrals in Shushi, including the removal of the Armenian cross and rounded, pointed dome from the “Kanach Zham” (“Green Chapel”) Armenian Church of Saint John the Baptist.

“Despite Azerbaijan’s unsubstantiated claims that the ancient Christian cultural heritage in the region is not Armenian but rather exclusively “Caucasian Albanian”, such claims have not stopped Azerbaijan from destroying cultural heritage that it labels as “Caucasian Albanian”, as confirmed by Azerbaijan’s devastating campaign against the largest medieval Armenian cemetery in the world – the historical khachkars (cross-stones) in Old Jugha in Nakhichevan, destroyed by the Azerbaijani Government between 1997 and 2006. Notably, Azerbaijan not only denies such conduct – which was captured on video – but also denies the existence of this Armenian cultural heritage at all, in line with Azerbaijan’s genocidal indoctrination directed against ethnic Armenians and Armenian culture and history.

“Sadly, such dangerous indoctrination is cultivated at the highest political level in Azerbaijan and Turkey, as reflected in the extensive use of inflammatory, derogatory language in relation to Armenians.

“The past weeks have clearly indicated that bellicosity, warmongering and anti-Armenian sentiments have taken firm hold of the public discourse in Azerbaijan and Turkey, and that these represent serious risks of atrocity crimes. On 22 October 2020, a group of 80 prominent Genocide scholars published a joint letter on the imminent genocidal threat deriving from Turkey and Azerbaijan against Nagorno-Karabakh, in which they point out the continuous policy of denial and justification of the Armenian Genocide.16 It is clear that Azerbaijan’s violent conduct, encouraged and supported by its enabling State, Turkey, has been aimed not at defense but at intentional infliction of maximum casualties on the Armenian side.

“At their core, the belligerent actions of Azerbaijan that began on 27 September 2020 violated international law as Azerbaijan’s conduct resulted in the resumption of hostilities, civilian casualties and widespread destruction. Plied with Turkey’s illicit caches of military command and counsel, hardware and technological munitions, and universally outlawed foreign terrorist fighters and mercenaries, Azerbaijan’s actions also led to the intensification of the conflict undermining peace and security in the region.

“Azerbaijan, therefore, demonstrated not only that it was not acting in “self-defense” under international law, but also that it had no intention of complying with the purposes and principles of the Charter of the United Nations, international humanitarian law and human rights law, or any of the Security Council resolutions that it has so often invoked for manipulative purposes. This was further evidenced by Azerbaijan’s failure to adhere to the 10 October, 17 October and 25 October agreements on humanitarian ceasefire.

“The fact that Azerbaijan chose to attack in the midst of a global health pandemic exemplifies Azerbaijan’s unwillingness to engage in peaceful resolutions and eagerness to resort to force.

“Not only are Azerbaijan’s actions incompatible with the core values and objectives of the United Nations, but they also set a dangerous precedent to the detriment of international peace and security and must be unequivocally acknowledged for what they are – an attempt to solve an international dispute by force, contrary to the obligations under international law, including customary law,” the letter reads.