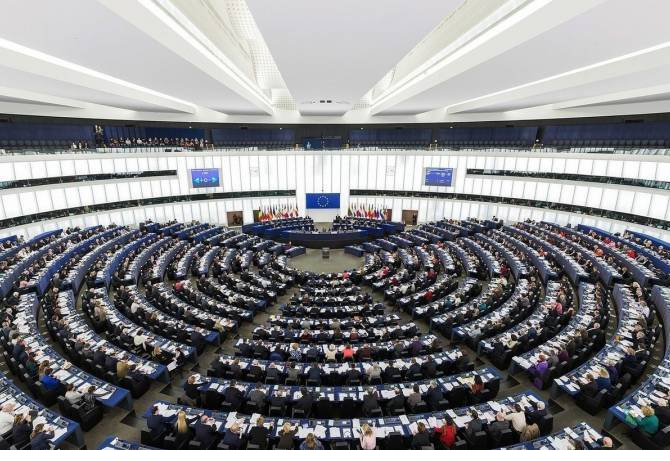 ARMENPRESS reports the 24th Article of the resolution says that the European Parliament ”Takes good note of the agreement on a complete ceasefire in and around Nagorno-Karabakh signed by Armenia, Azerbaijan and Russia on 9 November 2020; hopes that this agreement will save the lives of both civilians and military personnel and open brighter perspectives for a peaceful settlement of this deadly conflict; regrets that changes to the status quo were made through military force, rather than peaceful negotiations; strongly condemns the killing of civilians and destruction of civilian facilities and places of worship, condemns the reported use of cluster munitions in the conflict; urges both Armenia and Azerbaijan to ratify the Convention on Cluster Munitions, which comprehensively bans their use, without further delay; stresses that a lasting settlement still remains to be found and that the process of achieving peace and determining the region’s future legal status should be led by the Minsk Group Co-Chairs and founded on the group’s Basic Principles ; highlights the urgent need to ensure that humanitarian assistance can reach those in need, that the security of the Armenian population and its cultural heritage in Nagorno-Karabakh is ensured, and that internally displaced persons and refugees are allowed to return to their former places of residence; calls for all allegations of war crimes to be duly investigated and those responsible to be brought to justice; calls on the EU to be more meaningfully involved in the settlement of the conflict and not to leave the fate of the region in the hands of other powers’’.

In Artcile 38 the European Parliament strongly condemns the destabilising role of Turkey which further undermines the fragile stability in the whole of the South Caucasus region; calls on Turkey to refrain from any interference in the Nagorno-Karabakh conflict, including offering military support to Azerbaijan, and to desist from its destabilising actions and actively promote peace; condemns, furthermore, the transfer of foreign terrorist fighters by Turkey from Syria and elsewhere to Nagorno-Karabakh, as confirmed by international actors, including the OSCE Minsk Group Co-Chair countries; regrets its willingness to destabilise the OSCE Minsk Group as it pursues ambitions of playing a more decisive role in the conflict.

In the resolution on the implementation of the Common Security and Defence Policy the European Parlaiment welcomes the cessation of hostilities in and around Nagorno-Karabakh; underlines with concern the military involvement of third countries in the conflict and notably the destabilising role and interference of Turkey; calls for an international investigation into the alleged presence of foreign fighters and use of cluster munitions and phosphorous bombs; calls on the European Union and international bodies to ensure that there is no impunity for war crimes in Nagorno-Karabakh and for the use of prohibited weapons in the Nagorno-Karabakh conflict; insists on the need to allow humanitarian aid to get through, to proceed without delay with the exchange of prisoners and casualties, and on the need to preserve the cultural heritage of Nagorno-Karabakh.

In the resolutions on the implementation of the Common Foreign and Security Policy the European Parlaiment recognises that the stability, security, peace and prosperity of the Western Balkans and the Eastern and Southern Neighbourhood countries directly affect the Union’s own stability and security and that of its Member States, as well as its reputation as a geopolitical global actor; underlines the fact that the European Union is the biggest trading partner and investor in the Western Balkan and Eastern Partnership countries; calls for the EU to assume its strategic responsibility in the EU neighbourhood and play a more timely, active, unified and effective role in the mediation and peaceful resolution of the ongoing tensions and conflicts, and in the prevention of any future conflicts in the neighbourhood; believes that this can be achieved by prioritising efforts at pre-emptive peace-building, including preventive diplomacy and early warning mechanisms, by strengthening bilateral cooperation and supporting democratic forces and the rule of law, by creating positive incentives for socio-economic stabilisation and development, and by building up the resilience of societies, backed up by adequate budgetary resources; reaffirms its strong support for the Normandy Format, the Berlin Conference on Libya and the Minsk Group.