In Azerbaijan, patriotic Jewish soldiers are poster children of the war with Armenia 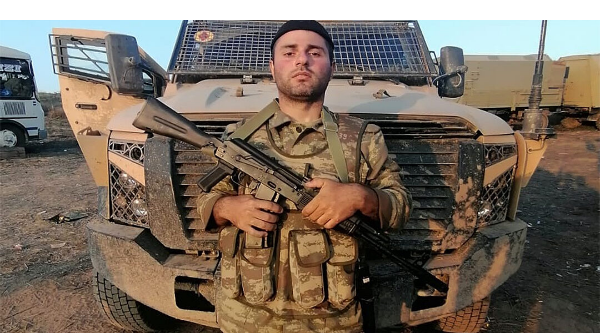 (JTA) — For decades, Rabbi Zamir Isayev has prayed on Shabbat mornings for the government of his native Azerbaijan, a Muslim-majority nation situated northwest of Iran.

Amid the recent deadly fighting between Armenia and Azerbaijan over disputed territory, he has added a special prayer for the well-being of Azerbaijan’s soldiers, which he follows up with his regular prayer for Israeli troops.

Isayev’s patriotism is typical of Azeri Jews, one of the world’s oldest Jewish communities, whose synagogues often feature Azeri and Israeli flags as well as pictures of community members who gave their lives fighting for Azerbaijan and before that the Soviet Union.

A picture of a Jewish casualty of war from 1992 hangs in the Georgian Synagogue of Baku, Azerbaijan in July 2018. (Cnaan Liphshiz)

Isayev has additional reasons for praying for the soldiers. Dozens of members from his minority of about 8,000 people are serving in Azerbaijan’s army, which suffered more than 2,000 fatalities in fighting last year with Armenia over the disputed Nagorno-Karabakh region. Though the parties signed an armistice in November, tensions in the area remain high.

One of the Jewish troops who took part in the fighting is 26-year-old David Sadiyev, a graduate of the Jewish high school in Baku. Isayev taught him to sing the Torah segment of his bar mitzvah.

Sadiyev, who returned home as relative calm returned to the border area, was featured prominently in the Azeri media, where he was presented as a symbol for tolerance and ethnic coexistence in Azerbaijan and its army. In an interview with Trend, a major news site, he was pictured putting on tefillin and posing with the Azeri and Israeli flags.

DayTube, the Azeri version of YouTube, featured a video of Sadiyev saying “Long live the friendship between Azerbaijan and Israel! Karabakh is Azerbaijan!” before shooting his AK-47 several times into the sky.

“Of course I’m worried for them,” Isayev said about his former students and congregants serving in the army. “But I’m also incredibly proud of them.”

The attention devoted to Sadiyev was likely directed from the top in Azerbaijan — an oil-rich dictatorship with no free press and a tight control over social media — to highlight religious tolerance in the country.

“This is a country where anti-Semitism is simply not an issue,” Isayev said.

Azerbaijani soldiers near the village of Dadivank, Nov. 25, 2020. Azerbaijan was handed parts of the Nagorno-Karabakh region in the conflict. (Stanislav Krasilnikov/TASS via Getty Images)

That sentiment seems to be the consensus among leaders and members of Azerbaijan’s Jewish minority, who have repeated it both on and off the record in interviews with the Jewish Telegraphic Agency and other media.

“Azerbaijan has a lot of minorities: Russians, Christians, Iranians, even Armenians,” Isayev said, “but the Jews are seen here as especially loyal and cherished allies. We’re not just another ethnic minority here.”

It’s an aspect of Azeri society that is grounded in history, according to Zeev Levin, an expert on Central Asia’s Jewish communities and a research fellow at the Truman Institute.

“Jews have lived in Azerbaijan for so long that they predate much of the other populations there,” he said. “That’s in stark difference to places like Ukraine, where they arrived as outsiders and are still seen as such by many.”

Azerbaijan captured a large swath of land in the 2020 hostilities from an entity known in Armenia as Artsakh, which is supported by Armenia. Backed by Armenian troops, that entity has held territories internationally recognized as belonging to Azerbaijan since hostilities in the 1990s.

Despite losing over 2,000 troops in the fighting, Azerbaijan has celebrated the war’s outcome as a victory. The Azeri government last month organized a military parade showcasing not its own units but vehicles – including twisted wrecks – it had captured from Armenia in battle.

Across the former Soviet Union, Jewish communities are often fearful of waves of nationalism like the one on display in Azerbaijan because they have often resulted in an explosion of anti-Semitism.

Not so in Azerbaijan, according to both Levin and Isayev.

“Fear of such things is not relevant to this part of the world,” Isayev said.

Even when Azerbaijan was part of the Soviet Union, Jews were allowed to keep practicing their faith, making it an exception among Soviet republics.

Radical Islam has little public presence in Azerbaijan, whose capital features a prominent statue of a woman removing her veil. The “Statue of a Liberated Woman” was built in the 1960s under communism, Isayev said, “but the fact that it stayed, and has never attracted any acts of vandalism, tells you a lot.”

In Azerbaijan, Mountain Jews, or Juhuro, are the largest of three Jewish communities, followed by Ashkenazim and ethnic Georgians. With lineage dating to the Jews of ancient Persia, the Juhuro are believed to have settled in the region 1,000 years ago. They speak Juhuri, a mix of Farsi and ancient Hebrew.

A view inside the office of the chairman of the religious community of the Azerbaijani Mountain Jews in Guba, 2013. On display is a menorah, a photograph and gold bust of Heydar Aliyev, the late founder of the new Azerbaijan, the Azerbaijan national flag and the Israeli flag. (Reza/Getty Images)

In Azerbaijan, many Mountain Jews either have homes or live in Krasnaiya Sloboda, a town in the country’s north where hundreds of Mountain Jews come from the rest of the country and beyond convene to visit the graves of their ancestors each year on Tisha b’Av, a day of mourning in Judaism for the destruction of the Temples in Jerusalem.

Women mourn their relatives at the cemetery overlooking the Jewish town of Krasnaiya Sloboda in northern Azerbaijan on July 21, 2018. (Cnaan Liphshiz)

But the center of Jewish life in Azerbaijan is Baku, a bustling metropolis reminiscent of Jerusalem for its mix of modern architecture, ancient Old City neighborhood – once a major stop on the Silk Road — and the light-colored stone facades of many of its buildings. Baku has six synagogues, a kosher restaurant, two Jewish schools and a Jewish kindergarten among other communal institutions.

Azerbaijan is also one of the only Muslim-majority countries in the world where the Holocaust is taught at schools as part of the mandatory curriculum. Controversially, teachers are instructed to draw parallels between the Jewish genocide and the Khojaly massacre of several hundred Azeris by Armenians in the First Nagorno-Karabakh War of 1992. Khojaly was one of multiple atrocities perpetrated over the past 300 years against civilians by militias from both parties in an ancient conflict between Armenia and Azerbaijan over territory and religion (Azerbaijan’s population is mostly Shiite Muslims, whereas in Armenia most citizens belong to the Armenian Apostolic Church.)

Hotels in Baku often fly the Israeli flag along with those of other countries, including Russia, France and the United States, in an appeal to tourists from those nations. Israelis are often treated with friendliness, especially by army personnel and veterans inquiring about the visitors’ military service. Israel also plays a prominent role in arming and training the Azeri army – a convenient ally on the doorstep of main enemy Iran. That fact is well-known there and prompts expressions of gratitude and admiration by locals toward Israelis.

But Isayev said the friendship between Israel and Azerbaijan is based on more than merely shared interests.

“Jews have long been in the fabric of the people of Azerbaijan,” he said. But beyond the shared history, “The Jewish people and the Azeri people share a secret weapon that is more powerful than technology: diversity and open-mindedness.”