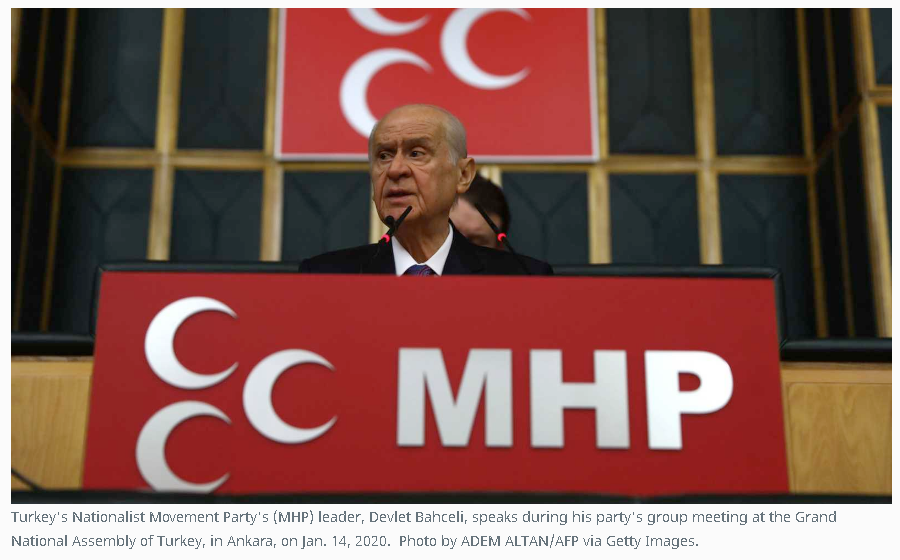 While claiming loyalty to the ruling party, Turkish nationalist leader Devlet Bahceli is squeezing the president by demanding the outright banning of the pro-Kurdish HDP.

Devlet Bahceli, leader of Turkey’s far-right Nationalist Movement Party (MHP), took to Twitter today to shoot down conjecture that his informal alliance with Turkish President Recep Tayyip Erdogan is in its death throes. Bahceli declared that his alliance with Erdogan, which was “a standard-bearer of tranquility for our honorable people and yet unborn Turkish children,” would continue “no matter the cost.” Those who claimed the opposite were liars seeking to sow discord, he said.

Bahceli also pooh-poohed the notion that Erdogan was looking for new allies in the run-up to possible early elections before 2023 when they are due to be held. Erdogan has been meeting with the leaders of several smaller parties, including the Islamist Felicity Party and the ultranationalist Grand Unity Party, over the past days. Bahceli insisted the visits served to broaden and bolster the Justice and Development Party’s (AKP) existing alliance with the MHP. “There is no question of the MHP being upset by these visits. We support them in full,” he said.

Bahceli’s 18-tweet-long diatribe follows growing speculation that the MHP is readying itself for a rupture with Erdogan and possible snap elections. This was triggered by the nationalist leader’s recent calls for prosecutors to ban Turkey’s largest pro-Kurdish party, the Peoples’ Democratic Party (HDP), over its supposed links to Kurdistan Workers Party (PKK) militants fighting a 36-year-old insurgency in southeast Turkey.

“No tolerance should be shown to any party organization that takes as its reference to ethnic separatism and terrorism. The fight with poisonous vermin is a wonderful service to national dignity,” Bahceli said in a series of tweets last month.

He has since upped the ante, calling on the chief prosecutor’s office to initiate proceedings against the HDP. If the prosecutor failed to move ahead on this demand, the MHP would seek the party’s closure under the country’s political parties law, Bahceli vowed.

The lack of judicial independence is no secret. Erdogan has not shied away from airing the view that prominent prisoners of conscience like the HDP’s former co-chair, Selahattin Demirtas, and the globally renowned Turkish philanthropist Osman Kavala should remain behind bars even after the European Court of Human Rights ruled they had to be freed.

Therefore, if Erdogan were to give the chief prosecutor the nod, it is widely assumed that a case to outlaw the HDP would be launched, thereby disenfranchising the 6 million people who voted for the party in the June 2018 parliamentary elections. Erdogan is in a bind.

According to Metropoll, an Ankara-based polling organization, around 30% of Kurdish voters — typically middle class and urban — have stuck with the AKP despite the government’s ruthless repression of the HDP. Thousands of its members and sympathizers are locked up on thinly evidenced terror charges. Some 48 mayors elected on the HDP ticket have similarly been forced out of office and replaced by government-appointed administrators. Overt expressions of Kurdish identity are treated as a criminal offense.

On Jan. 13, prosecutors initiated a probe against nine HDP lawmakers for their alleged role in riots that left over 50 people dead in the mainly Kurdish southeast in October 2014. The unrest erupted over the government’s perceived indifference in the face of the Islamic State siege of the Syrian Kurdish town of Kobani on the Turkish border. Demirtas is currently facing charges that he incited the bloodshed along with 107 people. News of the probe came a day after Bahceli renewed calls for the HDP to be banned.

If Erdogan were to play along, he would likely lose much of his remaining Kurdish base and fall even more firmly into the MHP vise. Conversely, resisting a ban would not win him any extra Kurdish votes — not unless Demirtas and company were freed, and perhaps not even then. Yet it would likely prompt nationalists to defect, much like when the government was holding now-scotched peace talks with the PKK. And as things currently stand, every vote matters.

The AKP has enjoyed uninterrupted single rule since 2002. But its ratings have been steadily slipping, a trend that has accelerated over the past year. This is attributed mainly to the economic downturn that has gripped the country, with joblessness, poverty and inflation on the rise. Many blame poor governance, the threat of sanctions from the United States and the EU, and the fallout of the coronavirus pandemic. But critics insist that the real culprit is the executive presidency, removing virtually all checks on Erdogan’s power and driving Turkey to the precipice.

He was returning a favor. Erdogan had bailed him out by helping erect judicial obstacles to Meral Aksener, a former interior minister, who split away from the MHP to form the Iyi (Good) Party.

Paradoxically, however, the system has left Erdogan vulnerable to the sort of pressure, some call it blackmail, now being exercised by Bahceli. Under the new rules, Erdogan needs to secure 50% plus one of the popular vote in order to be elected. He, therefore, needs the support of at least one other party with a sizeable share of the vote. Bahceli has milked this vulnerability to great effect, egging on Erdogan’s crackdown on the Kurds within Turkey and beyond and inserting his nationalist disciples into positions of influence in the judiciary and the police.

In taking on Bahceli as a partner, Erdogan had “appointed an administrator” from which he now took his orders, Ahmet Davutoglu — a former AKP prime minister who formed the breakaway Gelecek (Future) Party — said in an address to the local branch of his party in the mainly Kurdish province of Mardin. As a result, Davutoglu contended, “My brothers in the AKP now find themselves in a situation where they can only secure a place for themselves to the extent that they are able to mimic the MHP.”

Given the fallout, why is Bahceli squeezing Erdogan further by demanding the outright banning of the HDP, all the while claiming undying commitment to their alliance? There are several possible explanations for Bahceli’s brinksmanship. One has to do with the 73-year-old’s own fading electoral fortunes stemming in part from the halo effect of his partnership with the AKP.

Recent polls suggest that the MHP would garner only 6%, well under the minimum 10% of the national vote needed to win seats in parliament. Some of those votes are going to Aksener’s Good Party. More HDP bashing might stem the flow.

Another is that Bahceli wants to preempt any moves by Erdogan to revert to his old Reformist self. It’s something the president has been talking about, probably in a bid to woo back foreign investors and fend off EU sanctions. But he’s not acted so far.

In his tweetstorm, Bahceli reiterated his opposition to the HDP, saying its fate was a legal issue. He also praised the executive presidential system, saying it was Turkey’s “sole guarantee.” He was likely responding to rumors that Erdogan is looking to secure his future by striking a deal with opposition parties, whereby the AKP backs constitutional changes that would reintroduce the parliamentary system in exchange for being allowed to remain president, albeit with far less power. An IYI party official speaking not for attribution to Al-Monitor said Aksener was open to the idea. “Erdogan is running out of options, this offers him a safe exit, and the country a relatively painless transition back to normalcy,” the official said. The CHP has pledged to restore parliamentary democracy should it come to power so would likely back the scheme.

Others suggest that banning the HDP would help clear the AKP’s path for a stronger majority in snap elections, allowing no time for the Kurds to regroup, and that Bahceli is merely doing Erdogan’s dirty work for him.

The above reasoning, though, is predicated on the assumption that Erdogan cares about political legitimacy. He clearly does. However, “Erdogan’s main concern is to remain in power,” said Hiysar Ozsoy, an HDP lawmaker. “If politics no longer serve that purpose, he’ll resort to whichever other means that do,” Ozsoy told Al-Monitor.