Turkey’s top security official suspected of being a drug kingpin 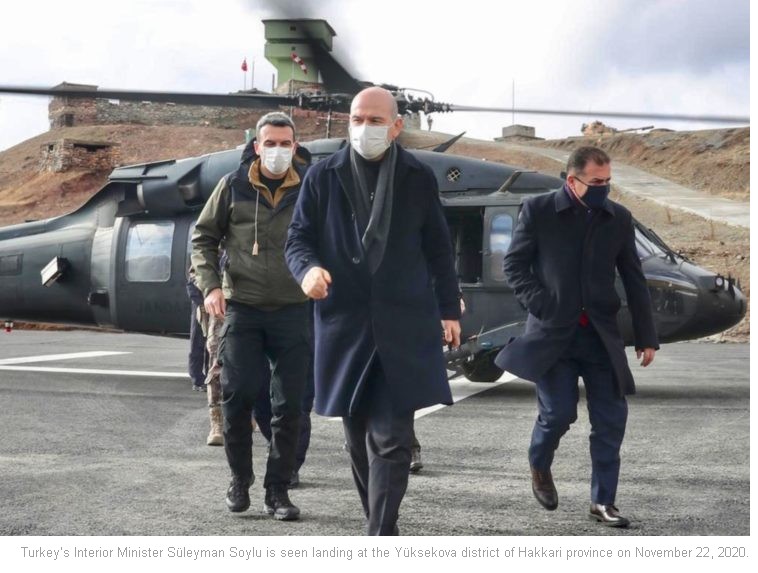 The allegations were made by exiled Turkish journalist Said Sefa, who said his findings were based on statements he dug out of court papers. According to Sefa, the interior minister acts in concert with a criminal organization known as the Hakkari Group in order to run, control and dominate the domestic drug trafficking network, starting from the entry of the illegal substances into the country at the eastern border until their shipment to Western countries.

The Hakkari Group is made up of members from nearby Mardin province, but they mainly operate in the Yüksekova district of Hakkari province, with their base of operations near the borders with Iraq and Iran. After the elimination of its predecessor, the Yüksekova Group, the Hakkari group has established direct contact with Minister Soylu and sees him as their protector and benefactor.

Sefa said on his YouTube media channel that “when Soylu announced his resignation, the Hakkari Group openly declared their distress and discontent in wiretapped phone conversations,” expressing the hope that President Recep Tayyip Erdoğan would never accept the resignation, as the group, feeling abandoned, argued that “they had just had the gears in place for the wheels to turn.”

Unlike many of his predecessors, Soylu regularly visits Hakkari and neighboring provinces in the border area with Gen. Arif Çetin, head of the gendarmerie, as a sign of his patronage and support for the illegal operations. The visits, presented as a review of security measures and meeting with troops, are in fact a smokescreen for him to handle the trafficking on the ground.

“Gen. Arif Çetin is also directly affiliated with the Hakkari Group, and every month he gets large sums of money in suitcases and gifts for his wife,” claimed the journalist, who has been living in Canada since he was forced to move into exile.

In this web of drug trafficking, smuggling and organized crime entanglements, Mehmet Kemal Ağar, a notorious nationalist politician and former minister, is believed to be a key figure who mentors Soylu in illegitimate schemes. Ağar helped facilitate a massive purge in the police department starting in 2014 to clear the path for Erdoğan’s clandestine business activities that were hampered at times when the police intercepted, investigated and exposed secret and illegal operations.

Most of the leadership in the police department was decimated by the Erdoğan government, which enlisted Ağar as the man to reshape the police, the main law enforcement agency in Turkey with nearly 300,000 officers. Ağar brought nationalists and controversial figures, some convicted for their ties to the mafia, into the management of the Security General Directorate (Emniyet), the national police department. Today, politically motivated criminal prosecutions are believed to have been put into motion by Ağar and his team under Interior Minister Soylu and in close coordination with Erdoğan’s office.

The drugs originating from producing countries and smuggled through the eastern borders of Turkey are transported to provinces near İstanbul. In those provinces, state officials, but mainly judges, public prosecutors, police officers and intelligence personnel, help carry the drugs in bags, suitcases and hand luggage as they are exempted from frisks, roadblocks and searches. “All these transactions are recorded and documented under surveillance,” Sefa says, lamenting, however, that these investigatory case files cannot be turned into proper criminal cases because of the political cover from Soylu.

Outside of Turkey, even diplomats were used as couriers. Veysel Filiz, former press counsellor at the Turkish Embassy in Brussels, was arrested in December 2020 on drug trafficking charges after police found 100 kilograms of heroin in his vehicle while attempting to enter Bulgaria via the border crossing point in Hamzabeyli, Turkey. He is being investigated by the Edirne Chief Public Prosecutor’s Office under investigation file number 2020/12562. It remains to be seen if the case will actually go to court or will be hushed up like many others under pressure from the executive branch.

Filiz is no stranger to the Turkish media. In September 2016 Belgian police detected Filiz’s IP address was involved in the sending of threats to Turkish journalists via social media. Filiz’s assignment had been cut short by the Turkish government due to the political and diplomatic sensitivity of the investigation. Before his arrest, Filiz was serving as the spokesperson for the European Muslim Initiative for Social Cohesion (EMISCO).

One-third of the drugs that arrive in İstanbul are then trafficked to Europe and other destination countries on ships using the system that was established by drug lord Urfi Çetinkaya, a multifaceted, multitiered system now managed by Hayati Çetinkaya, a relative. “Hayati Çetinkaya is in association with a person named Reşit with an unknown surname, who is the owner of Hotel Oslo,” said the journalist.

Nordic Monitor found that Hotel Oslo, located in the Yüksekova district of Hakkari province, is owned by a company named GÜNGÖR Tourism, Textile, Construction and Jewelry, Ltd. Co., registered at the same address as the hotel. One of the partners of the company is a person named Reşit Güngör.

Cevher Herki, from the Herki tribe in northern Iraq, visits Reşit whenever he comes to Turkey, according to the journalist’s account. Another person that Herki meets with in his travels to Turkey is Soylu. They meet under the pretense of talks to organize Turkmen forces in northern Iraq, a proxy group that has long been supported by Turkey.

Herki is a prominent figure among the Kurds in Iraq. He is the leader of the Herki tribe and was president of the Kurdistan Justice and Freedom Party. Herki, also spelled Harki, is the second largest tribe in Kurdistan after the Jaff. The bulk of the tribe lives in Iraqi Kurdistan, while a significant number live in Iranian Kurdistan.

Twin brothers Bedrettin Saral and Alattin Saral, leaders of a mafia group aiding in the trafficking of drugs and getting a 20 percent share from it are also involved with the interior minister. “There is only one reason why this mafia group gets a 20 percent share: Bedrettin Saral has a large number of connections and great influence over the AKP [Justice and Development Party, whose chairman is President Erdoğan], and whenever an operation is carried out, he gets word and handles the problem to the benefit of the traffickers,” Sefa said in describing the network. The Saral family apparently acts as a liaison between the illegal drug rings and the politicians.

The Saral brothers have links to the Turkish intelligence agency as well. “In 2015, while keeping the Saral group under surveillance, a rival police intelligence clique records that Bedrettin Saral had met Hakan Fidan [the head of Turkey’s National Intelligence Organization, MIT] in Ortaköy, İstanbul.”

Fidan also has connection to Naji Sharifi Zindashti, an Iranian drug kingpin who was arrested and released in Turkey in 2018 and operates on both sides of the Turkish-Iranian border. Zindashti has kinship ties to Fidan, who has roots in the same border area near Iran. Fidan is alleged to be an Iranian asset, meeting with Iranian officers to brief them on Turkish government policy, according to a classified 2014 investigation file on Iran’s Quds Force activities in Turkey.

The Interior Ministry’s connection to drug trafficking was first recorded in official papers when Engin Dinç, then the head of the Police Intelligence Department, ordered Güven Güzel, an intelligence officer in Ankara, to meet and talk with İlhan Ünğan and Orhan Ünğan, known mafia leaders. According to Orhan Ünğan, Selami Altınok, a former interior minister, is his cousin on his mother’s side. As reflected in court records, he admitted his relationship with both Dinç and Altınok. Zindashti also claimed on a live broadcast with journalist Sefa that he had been in contact with Dinç as well.