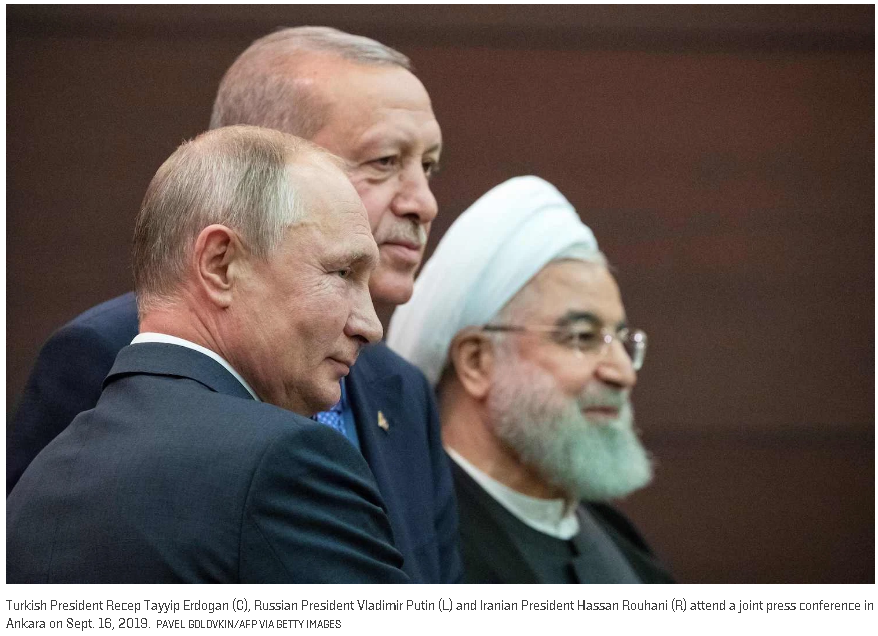 he Arab moment has passed. Competition between non-Arab powers—Turkey, Iran, and Israel—will shape the region’s future.

For more than two decades, the United States has seen the politics of the Middle East as a tug of war between moderation and radicalism—Arabs against Iran. But for the four years of Donald Trump’s presidency, it was blind to different, more profound fissures growing among the region’s three non-Arab powers: Iran, Israel, and Turkey.

For the quarter century after the Suez crisis of 1956, Iran, Israel, and Turkey joined forces to strike a balance against the Arab world with U.S. help. But Arab states have been sliding deeper into paralysis and chaos since the U.S. invasion of Iraq in 2003, followed by the failed Arab Spring, leading to new fault lines. Indeed, the competition most likely to shape the Middle East is no longer between Arab states and Israel or Sunnis and Shiites—but among the three non-Arab rivals.

The emerging competitions for power and influence have become severe enough to disrupt the post-World War I order, when the Ottoman Empire was split into shards that European powers picked up as they sought to control the region. Although fractured and under Europe’s thumb, the Arab world was the political heart of the Middle East. European rule deepened cleavages of ethnicity and sects and shaped rivalries and battle lines that have survived to this day. The colonial experience also animated Arab nationalism, which swept across the region after World War II and placed the Arab world at the heart of U.S. strategy in the Middle East.

All of that is now changing. The Arab moment has passed. It is now the non-Arab powers that are ascendant, and it is the Arabs who are feeling threatened as Iran expands its reach into the region and the United States reduces its commitment. Last year, after Iran was identified as responsible for attacks on tankers and oil installations in Saudi Arabia and the United Arab Emirates, Abu Dhabi cited the Iranian threat as a reason to forge a historic peace deal with Israel.

But that peace deal is as much a bulwark against Turkey as it is against Iran. Rather than set the region on a new course toward peace, as the Trump administration claimed, the deal signals an intensification of rivalry among Arabs, Iranians, Israelis, and Turks that the previous administration failed to take into consideration. In fact, it could lead to larger and more dangerous regional arms races and wars that the United States neither wants nor can afford to get entangled in. So, it behooves U.S. foreign policy to try to contain rather than stoke this new regional power rivalry.

Iran’s pursuit of a nuclear capability and its use of clients and proxies to influence the Arab world and attack U.S. interests and Israel are now familiar. What is new is Turkey’s emergence as an unpredictable disrupter of stability across a much larger region. No longer envisioning a future in the West, Turkey is now more decidedly embracing its Islamic past, looking past lines and borders drawn a century ago. Its claim to the influence it had in the onetime domains of the Ottoman Empire can no longer be dismissed as rhetoric. Turkish ambition is now a force to be reckoned with.

For example, Turkey now occupies parts of Syria, has influence in Iraq, and is pushing back against Iran’s influence in both Damascus and Baghdad. Turkey has increased military operations against Kurds in Iraq and accused Iran of giving refuge to Turkey’s Kurdish nemesis, the Kurdistan Workers’ Party (PKK).

Turkey has inserted itself in Libya’s civil war and most recently intervened decisively in the dispute in the Caucasus between Armenia and Azerbaijan over Nagorno-Karabakh. Officials in Ankara are also eyeing expanded roles in the Horn of Africa, and in Lebanon, while Arab rulers worry about Turkish support for the Muslim Brotherhood and its claim to have a say in Arab politics.

Each of the three non-Arab states has justified such encroachments as necessary for security, but there are also economic motivations—for example, access to the Iraqi market for Iran or pole positions for Israel and Turkey in harnessing the rich gas fields in the Mediterranean seabed.

Predictably, Turkish expansionism runs up against Iranian regional interests in the Levant and the Caucasus in ways that evoke Turkey’s imperial past. Turkish President Recep Tayyip Erdogan’s recent recitation of a poem lamenting the division of historic Azerbaijan—the southern part of which now lies inside Iran—during a triumphant visit to Baku invited a sharp rebuke from Iran’s leaders. This was not an isolated misstep.

Erdogan has been for some time suggesting that Mustafa Kemal Ataturk was wrong to give up Ottoman Arab territories as far south as Mosul. In reviving Turkish interest in those territories, Erdogan is claiming greater patriotism than that of the founder of modern Turkey and making clear that he is breaking with the Kemalist legacy in asserting Turkish prerogatives in the Middle East.