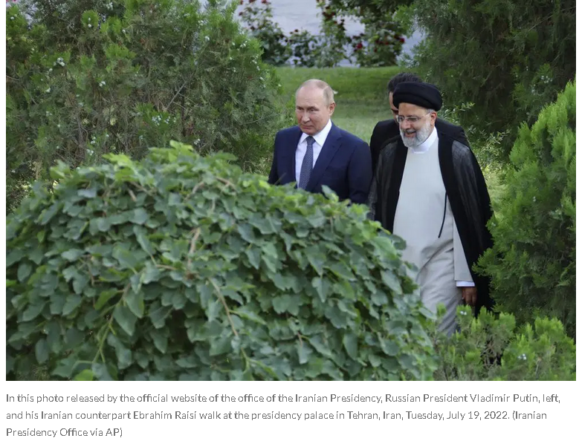 President Vladimir Putin’s visit to Tehran on Tuesday is invested with great importance, as Iran is becoming one of the most consequential relationships for Russia

When the US National Security Advisor Jake Sullivan first spoke about a potential Iran-Russian drone deal, Moscow kept quiet and Tehran issued a pro forma rebuttal, which, taken together, suggested that it is a work in progress. Sullivan’s disclosure appeared at the fag-end of a White House briefing for President Biden’s forthcoming West Asia tour to Israel and Saudi Arabia, and seemed to have an element of grandstanding aimed at fueling the latent anti-Iran sentiments in the Gulf region that could, in turn, inject some degree of contemporaneity to POTUS’ signal project to cobble together an Israeli-Arab military front in the region.

In the event, the ploy didn’t work. The West Asian countries continue to resist such regimentation by Washington.  After Biden’s visit got over, the Saudi Arabian foreign minister Prince Faisal bin Farhan told the CNN, amongst other things, that talks are going on between Iran and the Gulf Cooperation Council (GCC) states for improvement of relations and the focus should be on engagement and changing Iran’s behavior.

But Sullivan has repeated his charge and since added that an official Russian delegation “recently received a showcase of Iranian attack-capable UAVs,” the last time being as recently as on July 5.

CNN has cited White House officials as saying that Iran is expected to supply Russia with hundreds of drones for use in the war in Ukraine, “with Iran preparing to begin training Russian forces on how to operate them as early as late July.”

Iran is known to have a varied drone ecosystem and is reportedly showcasing to Russia, per the CNN report, the Shahed-191 and Shahed-129 “killer” drones. According to published information, Shahed-129 has a wingspan of 50 feet with a cruising speed of about 160 km per hour, an endurance of 24 hours with a range of 1,700 km and a ceiling of 24,000 feet. The 129 can carry up to eight Sadid-345 miniaturized precision-guided bombs capable of hitting moving targets. The bomb’s small size with a range of 6 km reduces collateral damage and would allow the Shahed to achieve more kills or attack strikes per mission.

Both are stealth drones, harder for air defenses to detect, and can complement each other in operations. Russia is, reportedly, short of such armed drones, which have the capability to undertake long-range missions to find and destroy, for example, the US-supplied HIMARS mobile rocket launchers, which are currently deployed in Ukraine, as well as knocking out Ukrainian air defenses. Besides, drones are relatively cheap and expendable, unlike crewed aircraft.

If the drone deal indeed goes through, as seems quite likely, it will mark a quantum leap in Russia-Iran relations. For, Iran will be doing for Russia something that only China is capable of doing but won’t out of fear of US reprisal. That makes Iran a very special partner country indeed for Russia. Ironically, though, Russia is yet to upgrade its relationship with Iran as “strategic.”

On its part, Iran is literally sticking out its neck in an act of defiance of the West’s “rules-based order”, as Russia will be deploying its weapon systems in the European theater against the air defense systems supplied to Ukraine by the US and NATO countries. There cannot be many parallels of an emerging middle power rendering such critical help to a superpower in high-tech warfare in real conditions on the frontline. Of course, it enhances Iran’s standing regionally and internationally.

In geopolitical terms, however, the important salience lies in the certainty that the door is being slammed shut on the nuclear negotiations between Iran and the US via European mediators, which had been going on Vienna for the past year.

Unsurprisingly, Tehran would have drawn the conclusion already by now that President Joe Biden is virtually dissimulating, while in reality adopting his predecessor’s Iran policies, and the US has reverted to its decades-old (failed) strategy of promoting an Israeli-Arab front against Tehran. Clearly, Tehran is moving on to a renewed trajectory that is predicated on unremitting American hostility.

This will mean that Tehran will double down on its efforts to improve relations with its Arab neighbors and explore all possible avenues in that direction, seizing the window of opportunity in the new Saudi thinking to reduce its dependence on the US and explore its strategic autonomy and independent foreign policy.

It is possible to say that Tehran is a beneficiary of the deepening Saudi-Russian and Saudi-Chinese relationships. Arguably, Saudi Arabia’s quest for BRICS membership brings the Kingdom pretty close to Iran’s world view, which places primacy on a democratized, multipolar world order where every country is free to choose its developmental path and political system.

To be sure, against this historical backdrop of a transformative West Asian region, President Vladimir Putin’s visit to Tehran on Tuesday is invested with great importance. Iran is becoming one of the most consequential relationships for Russia.

What began as a limited alliance in Syria to fight terrorism has taken wings through the past seven-year period and is assuming global character. Late Qassem Soleimani would have felt immensely gratified that his mission to Moscow in July 2015 has succeeded beyond all expectations.

M.K. Bhadrakumar is a former career diplomat. He mainly writes about Indian foreign policy and the affairs of the Middle East, Eurasia, Central Asia, South Asia and the Asia-Pacific.