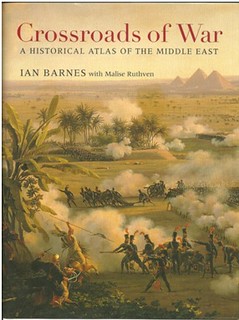 Khatchatur I. Pilikian’s Review  of CROSSROADS  OF WAR.  In The Spokesman 128, the Journal for the Bertrand Russell Peace Foundation.

A flamboyant volume indeed, with some hundred pages of brilliant maps and another hundred of history of wars, instruments of war, devastated countries and cultures, incessant assassinations of power holders and their families, mass exterminations, religious intolerance and murderous conflicts, destruction of temples, villages, towns and cities. In a nutshell, war tales of the Middle East, all through the last five thousand years — an impressive scholarly achievement for sure. And all because, as one of the authors explains in the Introduction:

Throughout recorded history the Levantine Corridor has seen the     movement of armed forces, as those who controlled this vital strip commanded the whole Near Eastern region. (p.6)

After reaching the end of the war narratives, and having endured the macabre tales, I somehow felt the need of an Epilogue, to better understand the real and moral raison d’etre of such an awesome endeavour, having in mind the turbulent world in which we live. I sincerely wanted to know if the authors, having accomplished their task, do somehow believe or not that another world is possible. And if positively so, I would have felt enriched to know how they envisaged the transformation of that possibility into a probability. In case of a negative stance, then, alas, ‘vanity, all is vanity’. The distinguished authors of this unique historical atlas left my queries unanswered.

But then, I remembered a reassuring thought I read in another atlas-book, which had filled my heart with a distilled joy, and a feeling to share it with everyone:

Homo sapiens has been around for at least 250,000 years. Yet war and military might have been known only in the last 5,000 – 2% at most of our history. War is neither a part of human nature nor, necessarily, of civilised life. (The Gaia Peace Atlas, Editor, Dr Frank Barnaby.  Quoted in Alternative World, by Nares Craig.  p. 160)

In one of his impressive volumes, Bertrand Russell diagnosed the malaise of power, saying:

Throughout history, great nations have been led to disaster by unwillingness to admit that their power had limits. (Has Man a Future? p.45)

Crossroads of War totally reaffirms Russell’s diagnosis. Regarding both the tragedy of the Jewish people in the aftermath of World War Two, and the diaspora of Palestinian refugees, the authors admit that:

The movement of many people to Palestine, and later the State of Israel, solved some problems for the Jews but, in turn, displaced Palestinian Arabs became refugees, forced to live in camps in other countries where they were not assimilated.’ (p. 178)

An apt juxtaposition, for sure, but I remain shocked not to find any mention of the word ‘Genocide’, when most of the mass and cultural annihilations mentioned by the authors do cry out to be acknowledged as such. It is worth remembering the raison d’être of Raphael Lemkin’s coinage of the word Genocide (see Spokesman 93). Lemkin was adamant in saying that Genocide ‘happened so many times’. Curiously enough, ‘Holocaust’ is mentioned once, only to label the Jewish survivors, those who dared survive the magnum crime.

It’s worth pointing out that the word Holocaust was used during the massacres of the Armenians in the 1890s, to underline the religious aspect of the tragedy — Christian Armenians massacred by Moslem Turks and Kurds — as a large mass of Armenians were burnt alive in the Urfa Cathedral in 1895. Hence the word ‘Holocaust’ was used by the noted missionary, Corin Shattuck, to visualise and characterise this horrible event.

Etymologically, Holocaust = ‘Whole-Burnt’, is intrinsically linked with the act of sacrifice — a sacrificial offering which is completely consumed by fire, whereby cleansing from sins and, ultimately, purification is expected to be attained, functioning as an atonement, or indeed:  ‘an offering made by fire, of a sweet savour unto the LORD’. (The Holy Bible, authorised King James Version, Leviticus, 1:17)

Does genocide ‘taketh away the sins’ of the murdered community, whether massacred, gassed or burnt? Or does it, perhaps, cleanse the sins of the murderers for the bliss of purification?  God forbid. With all respect to all concerned, it must be said that Holocaust is an erroneous and misleading coinage of the reality it is hoped to illustrate and define.

Perhaps the neglect of the term Genocide in Barnes & Ruthven’s book is a subtle way of refuting Lemkin’s superb trove, especially when the distinguished linguist was adamant to remind us all that in the 20th century Genocide happened ‘First to the Armenians, then after the Armenians, Hitler took action’. (History of the Genocide, by V. Dadrian, p. 350)

The Glossary on p.218 of the Crossroads of War defines ‘Holocaust’ as:

Systematic mass murder or genocide of some 6 million Jews by Nazi Germany and its allies.

Obviously, the authors have cleansed the word Holocaust of all its original, religious attributes. When referring to the mass movements of refugees of the Middle East, it is negligent of historical data not to mention the survivors of the Genocide of the Armenians, who were uprooted from their ancestral homelands in Anatolia, as a result of the meticulously planned magnum crime executed by the proto-Nazi government of the Young Turks. Hence, starting in 1915, hundreds of thousands of Genocide survivors became the first Diaspora of Armenians in the Middle East.

This year, 2015, is the 100th commemorative year of that Genocide of the Armenians. Let us hope the authors of this formidable atlas will not be

charmed by the zealots of the camp who blindly refuse to acknowledge the veracity of that historical truth.

In the last paragraph of the Introduction to Crossroads of War, Malise Ruthven draws a parallel between the Frankish Crusaders, also named as Outremer (from the French ‘outre mer’), and the ‘new group of settlers’ – meaning the Jewish ones – ‘whose project for an occidental state in the Levant carries numerous echoes of Outremer’ (p. 13). She concludes:

Today a new Outremer, remains, all-powerful, like its medieval predecessors. But there is no guarantee that in an increasingly hostile environment it can maintain this pre-eminence indefinitely. (p. 13)

Today’s Outremer resides not in the Levant, but beyond the oceans – an Outre-mer indeed.