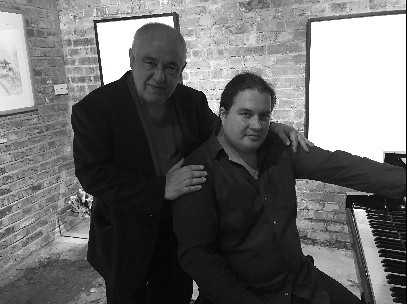 The Professor And the Pianist

By Professor Hovhanness I. Pilikian

In a corner of a … corner of the Borough Underground Station, on the Northern line in South London, which became overnight famous because of a very recent terrorist attack, you shall find a gem – a Polish pearl – of a mini art-centre.

It is deeply moving to witness their love – for Peter, Olga can do no wrong, and he kindly serves bottles and bottles of his fruity wines to welcome Olga’s well-attended artistic functions.  Over two long decades now, Olga has been revitalizing the London art-scene with her own original and innovative Exhibitions.

Recently, she had the incredible idea of using Peter’s venue as a mini classical concert-hall.  It could have been a disaster, were it not for the extraordinary virtuosic talent of her Pianist-in-residence, given a cute semi-grand small Steiner.

And what a divine gift … Łukasz proved its worth in 24 carat gold, by playing an evening of Bach and … Chopin, exclusively (7th July, 2017, 7.30 pm).  And what a magnificent Duo – Łukasz obviously loves Bach, as Chopin did, and I myself worship Bach as the Jehovah of all music.

Piano and string instruments are strange mysterious creatures … whatever the player feels, emotionally, runs through the arms and pours out directly onto the strings (the hammers in the case of the piano) which instantly express it. No music expert (be it historian or critic) has been able to explain this incredible mystery unique to the world of music – what a performer feels is transmitted to the audience directly, for which reason, some performers (especially from the world of Piano) go berserk doing what I call ‘monkey business’ with their faces (for maximum effect).

When the Pianist is handsome, like Mr Łukasz, tall, with a Samurai pony-tail, it can always be pleasant to watch the performer’s visage during a concert.  But when he is blessed with an ‘ugly’ severe face like … Arthur Rubenstein, one was lucky Rubenstein rarely moved a muscle on his face, while the different emotions still poured out through his fingers!  He is the kind of pianist I appreciate and endorse, and Łukasz (like Rubinstein) had a well-restrained and controlled face, without any monkey-business playing havoc with his piano playing.

Foremost, and even more importantly, Łukasz played by heart, from his heart, and not by a score.  It is how all music must be played.  I am sympathetic to human frailty, and weaker memories, but I would encourage especially the young to internalize the musical piece they have chosen to play so profoundly, that when they play it, it must feel like they are the … composers creating it for the first time there and then for the audience.

And if Łukasz can do it … they must all do it, if they wish to acquire the mastery of the musical piece they play.  In other words, Music is where Memory plays a vital part in the creative process.   And if a virtuosic instrumentalist is blessed with it, he should never ever get lazy to use it to internalize his chosen repertoire.

Bach composed a series of Preludes and Fugues as exercises (even for children!)  Without any monkey-business, when Filipczak played the E flat minor Prelude and the Fugue in D sharp minor, with a delicate subtlety that belied his physical bulk, he converted his mini-gallery concert into a massive Royal Festival Hall event… with five Chopin pieces to follow.

Chopin’s Etude in A flat major Op. 25 No 1 seemed to be flowing out of an… Aeolian harp … Chopin’s music being produced by the close proximity of the two hands on the keyboard, Filipczak’s music flowed like a mountain river pure and wholesome.

Chopin invented the musical form of the Mazurka from Polish folk-music, and Filipczak played four of them (Opus 24) in sequence – unsurprisingly, they were truly variations of the same theme – it is not possible for a creative artist to be always original and endlessly inventive, even for someone like … Chopin, although his Ballade in G minor op.23 was the fruit of yet another new musical form, intensely beautiful, and Romantic, and quietly passionate.

Ultimately, what overwhelmed me, was Filipczak’s performance of the last piece of his highly intelligent program; Chopin’s Polonaise in E flat minor, op 26 No 2 – Filipczak generated such a powerful emotion of longing for one’s motherland, I palpably felt the whole Polish nation’s passion for freedom, and as an Armenian sharing almost the same national fate, Filipczak’s piano made me cry and cry in a flood of tears … from a distance I noticed Mrs Olga Sienko’s eyes who had recently visited the Armenian Republic, and was familiar a bit with our history.

Olga was so concerned by my emotional reaction, that just before I left, she whispered to me discreetly that if I wished to settle in Yerevan, she could pull some strings!

I just could not tell my honey-sweet friend Olga that my country today is ruled by a mafia gang I cannot endorse – hence more tragic for me to hear Chopin’s Polonaise!

Even more extraordinary is the musical consciousness that Filipczak aroused in me to recognize the influence of Beethoven’s Fifth Symphony and its famous knock of the Fates… I have absolutely no hesitation to insist that Chopin was consciously inspired by Beethoven’s Fifth to compose his specific Polonaise in E flat minor.  And Chopin’s genius?; is manifest when after a volcanic eruption of nostalgia in complex harmonies, he ends his Polonaise on a single quiet note of meditative sadness.

And this great discovery of mine, I owe it entirely to Filipczak’s performance.  I hope that when he plays his Chopin’s nostalgic Polonaise next, and consciously constructs it on the dimension of Beethoven’s Fifth, he will enrich the souls of his audience.