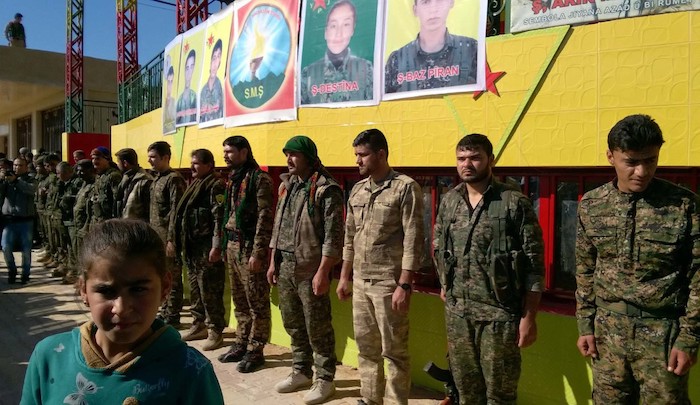 In the midst of the bloody war in Syria, the Kurds took advantage of the chaos and claimed control over northern Syria in 2012. They established a so-called “government” there led by the Kurdish Democratic Union Party or PYD. Its armed force is the YPG (People’s Protection Units), which is the Syrian wing of the PKK (Kurdistan Workers’ Party). The Syrian Democratic Forces in northern Syria, which much of the media hails as “America’s greatest ally in the region” is also led by the YPG.

For years and particularly since US president Donald Trump declared the US would withdraw its troops from Syria, a major media campaign of propaganda and disinformation has been launched. Below I will try to expose some of the lies the mainstream media has been spreading and explain the truths concerning the region:

The Kurdish presence in Syria began when Kurds immigrated from Turkey. After the 1925 Sheikh Said revolt in eastern Turkey, Kurds started moving into established cities in Syria. Hence, the term “Rojava” (“Western Kurdistan”) was invented only in recent years by PKK Kurdish nationalists in an attempt to distort the history of the region, attribute a new Kurdish identity to it and erase the true cultural heritage of the land.

That region is Syria and has historically been called as such. But there has been such intense propaganda that falsely claims that the majority of northern Syria is Kurdish and that the region is called “Western Kurdistan” or “Rojava”. Both allegations are factually incorrect.

Not only do Kurds in Syria constitute a minority there. They also did not have an area under their control that was contiguous to each other. For instance, there are Arabs between the cities of Afrin and Qamishli, which were under Kurdish control until the Turkish invasion. Similarly, between Kobane and Qamishli are Arabs. However, the lie called “Rojava” – a so-called historic “Kurdistan” in Syria – has been spread systematically both in Turkey and internationally. The truth is the majority of the population in northern Syria is not Kurdish. And the region is not “Kurdistan” at all. It is Syria.

Turks and their Islamist murderous allies have invaded Ras al-Ayn and Tell Abyad. 90 percent of Ras al-Ayn is Arab. 70 percent of Tell Abyad is also Arab. And 95 percent of Raqqa is Arab. So Kurds have occupied Arab land in Syria and call it “Kurdistan”. That’s why, most residents in those cities do not support the Kurdish rule there.

Centuries ago, the Ottoman Empire invaded ancient lands in the region – such as the Greek Byzantine Empire and Western Armenia. But even Ottomans did not change the names of most of the cities in Asia Minor. For instance, the name of Constantinople remained as such until the 1930s.

Kurds, on the other hand, invaded Ras al-Ayn, 90 percent of whose population is Arab. Ras al-Ayn is an ancient Assyrian town named Rish Ayno. but the YPG-led Kurds call it “Sere Kaniye” today. So even when Kurds did not establish a legally-recognized government in Syria, they started Kurdifying the names of the towns in the region. This shows how much they disrespect and degrade the ancient heritage of northern Syria.

Another falsehood spread by the PKK and much of the mainstream media is that “Kurds have defeated ISIS”. The truth is that the biggest role in the defeat of ISIS was played by the Iraqi government, the Syrian government and the people’s armed initiatives that support these governments. Those are the groups that have mostly defeated ISIS.

Then, why does much of the media only focus on the liberation of Raqqa and Deir ez-Zor, where the Kurdish YPG fought against ISIS? By the same logic, it is the Turkish military and its Islamist allies that removed ISIS from the Syrian cities of Al-Bab, Azaz and Jarabulus. Would it be true if one said it is the Turkish military that defeated ISIS? Of course, not. Turkey is known to have aided and abetted ISIS, al-Qaeda and other Islamist terrorists for many years.

The truth is it is the Syrian government that defeated ISIS in vast areas such as Aleppo, Hums, across the Jordanian border, Daraa, Quneitra, Sadad, Al-Qaryatayn, the city of Deir ez-Zor, Eastern Ghouta, Maloula, al-Qusayr, the region of Qalamun, and Palmyra, among others.

The media has mostly focused on the potential destruction of Christian lives and civilization in Syria following the Turkish invasion. One of the Christian communities indigenous to Syria is Assyrians, who have a sizable community in northern Syria. Assyrians were subjected to genocide and ethnic cleansing many times in modern history: The Massacre of Assyrians at Hakkari (1843); the Assyrian Genocide (1914-1923); the Simele Massacre (1933); the Soriya Massacre (1969); and the more recent genocide and ethnic cleansing campaigns at the hands of ISIS (2014-2015).

Most Assyrians in Syria do not want the oppressive PYD Kurdish rule there that has seized their lands or properties and persecuted them.

On August 28, 2018, for instance, militiamen belonging to the Kurdish PYD entered private Assyrian schools in Qamishli and expelled all administrators and teachers. On September 3, 2018, some Kurdish PYD people went to the house of Nidal Rahawi, an Assyrian artist in the city of Qamishi, to kill him because he was critical of the PYD regime there. He later said he ran for his life through the back door of his house. On September 30, 2018, the Kurdish PYD arrested prominent Assyrian journalist and Qamishli resident Souleman Yusph. His possessions, including his laptop and various documents, were seized by the Kurdish authorities. Many more examples could be given about the Kurdish oppression of Assyrian Christians in northern Syria.

How can Assyrians then have sympathy for the Kurdish PYD/YPG when they target and oppress them like this? That is why, the PYD does not represent the will of Assyrians in Syria. Nor is it a true ally of Assyrians either in Syria or in the Diaspora.

Also, during the Turkish invasion of Syria, Kurdish YPG members in civilian clothes threw mortars from a park in Qamishli to Nusaybin, a town in southeast Turkey, which killed Kurdish civilians there. Apparently, their aim was to provoke the Turkish army to attack Qamishli and other Syrian towns that have sizeable Christian communities and kill Christians there to make the world condemn and attack Turkey.

In one case, the YPG attacked Nusaybin from a place near the Mor Circis Church in Qamishli, to which Turks responded, and as a result, Christian Assyrian man, Fadi Habsuno, and his wife, Juliette Issa Nicholas, got injured and hospitalized.

Both the Kurdish PKK/YPG and Turkish president Recep Tayyip Erdogan engage in propaganda, trying to portray themselves as “protectors of Christians”. But they both are persecutors of Christians.

Although these facts are obvious, the YPG/PKK and much of the international media spread many falsehoods in an attempt to confuse the public and distort historical and current realities. This appears to be one of the greatest and most alarming disinformation campaigns by the media in history.

Ethical journalists should try to do a better job of exposing realities on the ground.

Ibrahim Seven is an Assyrian political commentator originally from Turkey. He is now based in Germany.