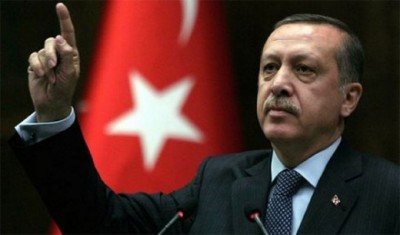 With Turkey failing to topple Syrian President Bashar al-Assad from power in their drive to forge a regional hegemonic order under their rulership, Turkish President Recep Tayyip Erdoğan has set his eyes on other Eastern Mediterranean issues, primarily aggression against Cyprus, Greece and Libya. With the Turkish military publishing maps that show Greece’s eastern Aegean islands belonging to Turkey and the Turkish Defense Minister demanding 16 of these islands be demobilized of the Greek military, the Turkish Defense Ministry publishing maps of Cyprus belonging to Turkey on their social media cover photos, and redrawing the maritime borders of the Eastern Mediterranean so that Turkey and Libya’s internationally recognized Muslim Brotherhood government in Tripoli can carve up some of Greece’s maritime space between themselves, there is little doubt that Erdoğan has embarked on a mission of recreating the Ottoman Empire.

It is not conspiratorial or sensationalism to claim that Erdoğan is attempting to create a neo-Ottoman Empire when we consider Turkey’s withdrawal from the “zero problems with neighbors” policy when Ankara immediately involved itself in the Syrian conflict in 2011 and sent tens of thousands of jihadists, that it armed, trained and funded, into the Arab country. The Syrian war provided an opportunity for Turkey to engage in power projections within a new regional order where Ankara would be the center of power.

The plan for a neo-Ottoman Empire was not initially based on territorial expansion but to create a network of Muslim Brotherhood governments loyal to Ankara. The failure to topple Assad was partially a reason for Turkey to invade large swathes of northern Syria, where now the Turkish flag is displayed instead of the Syrian one, a Turkification of the school curricula, and portraits of Erdoğan displayed. This suggests that Turkey is not planning to withdraw from northern Syria. This is so they can create an unresolved status quo just as it has with its illegal occupation of northern Cyprus that it doggedly refuses to resolve.

With Turkey firmly in control of these areas in northern Syria and unable to topple Assad, Erdoğan has now re-shifted his country’s focus by saying that Ankara’s foreign policy will prioritize other areas of the Eastern Mediterranean. This has meant the transfer of militants operating in Syria to Libya. Many of these terrorists have already been transferred there by Turkey, with many of them not even shooting a single bullet before fleeing to Italy. With 2,400 terrorists from Syria already in Libya and at least another 1,700 on their way, who openly say they are fighting for “the Ottoman Caliphate,” the European Union has not taken a strong interest despite these jihadists being on their doorstep or already infiltrating the EU.

Sunday’s Berlin Conference on Libya ended in disappointment for Erdoğan after he “freaked out and left the conference ahead of schedule” when he found no support in his plans to intervene directly in the North African country. However, the Berlin Conference also demonstrated that the EU adopts a very passive stance towards the Libyan crisis despite the latest flareup being partially heated up by Erdoğan’s deal with the Libyan Muslim Brotherhood government in Tripoli to steal the maritime of fellow EU member Greece – which strangely enough was not invited to the conference by German leader Angela Merkel. This is an extremely dangerous move by the EU to have such a passive policy when terrorists loyal to Erdoğan are infiltrating Europe and can serve as a fifth column to enact Turkish interests.

A Turkish government official had the audacity to say days ago that the crisis in Libya was not an EU problem despite the Tripoli-Ankara deal against Greece, and the potentiality this conflict has in triggering a new refugee crisis. Former Turkish President Turgut Özal (1989-1993) even admitted that “We do not need to make war with Greece. We just need to send them a few millions illegal immigrants from Turkey and finish them.” Erdoğan certainly has adopted the “Özal doctrine,” as it has become known, and flooded Greece and the wider EU region with illegal immigrants and even continues to threaten to send more. With the initial refugee crisis triggered by the Syrian War, in which Turkey had a critical role in causing, it appears that the “Özal doctrine” will be expanded to not only flood Greece with more illegal immigrants, but also Malta and Italy via Libya.

Although Turkey is a NATO member, it has in recent years embraced the emerging Multipolar World Order. However, they have not embraced the emerging Multipolar system to create balance through their own sovereignty in foreign policy, but rather to pursue their own imperial ambitions. With Greece offering its military as a peacekeeping force in Libya and Turkey threatening to intervene on the side of the Muslim Brotherhood government, it could see a dangerous escalation between two so-called NATO allies.

Although the EU has adopted an appeasement policy with Turkey’s aggression despite their direct threat to EU members Greece and Cyprus, Erdoğan’s adventurism has actually left his country weaker and isolated as their sole regional ally is the besieged Tripoli government. Meanwhile a complex alliance, whether directly or indirectly with each other, consisting of Greece, Cyprus, Egypt, Israel, Saudi Arabia and the United Arab Emirates, has emerged to support the Libyan National Army against Tripoli and to oppose Turkish expansionism. Therefore, although Turkey is threatening to directly intervene in Libya, has sent thousands of jihadists to fight in the North African country, and continues to blackmail the EU with the risk of sending hundreds of thousands of illegal immigrants to Europe, Erdoğan’s dreams of a neo-Ottoman Empire will not materialize.

Note to readers: please click the share buttons above or below. Forward this article to your email lists. Crosspost on your blog site, internet forums. etc.

This article was originally published on InfoBrics.

Paul Antonopoulos is a Research Fellow at the Center for Syncretic Studies.

Erdoğan’s Adventurism in Syria and Libya Has Left Turkey Weaker and Isolated
The original source of this article is Global Research
Copyright © Paul Antonopoulos, Global Research, 2020