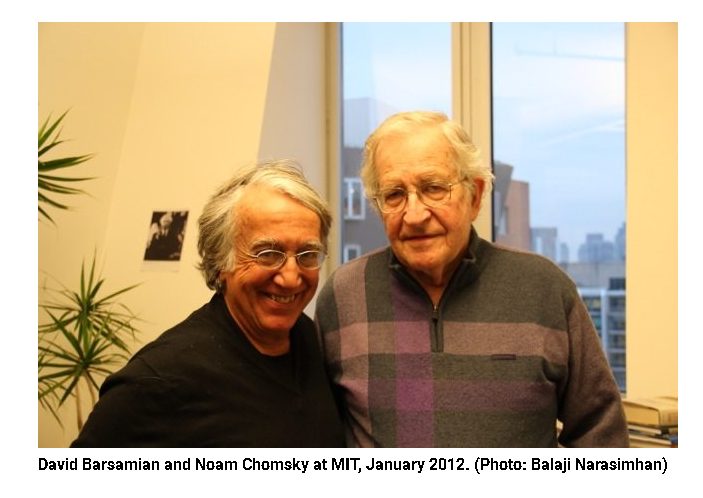 On October 9, 2020, Barsamian spoke with Noam Chomsky about the war on Artsakh, its imperial roots and the role of “malevolent actors” like Turkey’s Erdogan. The Armenian Weekly thanks Barsamian for permission to publish the transcript of the interview below.

David Barsamian—The fighting in the Southern Caucasus might be an example of what Edward Said called “unresolved geographies.” A legacy of imperial cartographers. Stalin as commissar of minorities in 1920, to placate Turkey, gave Nagorno Karabakh, which Armenians call Artsakh, and Nakhichevan, both Armenian majority areas, to Azerbaijan. Then with the collapse of the Soviet Union in the 1990s, fighting breaks out, resulting in Armenian forces taking Nagorno Karabakh. There have been skirmishes, so-called incidents, on and off since then, but the attack by Azerbaijan that began on Sept. 27th, no doubt in coordination with Turkey, represents a major escalation. The reporting here [in the U.S.], the little that there is, is without historical background or context. Fighting “erupts,” there are ancient enemies, etc.

What are the roots of this conflict?

Noam Chomsky—You’re right that Stalin drew the borders, but remember, he was not the only one to draw borders. The entire Middle East was carved up by French, British imperialists, drawing lines where they wanted, which were to their benefit, taking no account of the needs and interests of the populations. That’s a large part of the cause for the bitter, violent conflicts raging through the region.

Take, say, Iraq. The British drew the borders around Iraq so that Britain, not Turkey, the former Ottoman Empire, would have control over rich oil resources in the north. That brought together Kurds and Arabs who had nothing to do with each other. The British furthermore wanted to make sure that the new creation they were imposing would not be independent, would not have free easy access to the Gulf, so they carved up the principality of Kuwait, which the British would control, to prevent Iraq from having easy access to the Gulf. Syria, Lebanon, Palestine, same thing. Lines drawn by French, British imperialism for their interests. All over Africa, you see straight lines. Why? The imperial powers were destroying Africa for their interests. Hideous atrocities. We don’t have to go through it. Still showing up with the people dying in the Mediterranean, fleeing from the horrors that were created. So it’s not just Stalin; all the imperial powers.

Well in the case of Armenia and Azerbaijan, there’s a long history. Can’t go through it, but the immediate crisis came when Azerbaijan, surely with Turkish backing, Israeli arms pouring in. Ben Gurion airport in Israel, Ilyushin planes coming in and out, while no other planes are flying [into Baku], sending Israeli arms to Azerbaijan so they can kill people, Armenians in Nagorno Karabakh. So yes, this is an escalation. International. Russia is on both sides, Iran is supporting Armenia, very strange relations. It’s horrible for the people there. It’s a very dangerous situation. It’s time for international diplomacy, for negotiations to take place to try to dampen in down.

The actors are not the nicest people in the world, to put it mildly. Erdogan in Turkey is basically trying to create something like the Ottoman Caliphate, with him as caliph, supreme leader, throwing his weight around all over the place, and destroying the remnants of democracy in Turkey at the same time.

Israel is interested only in selling arms. They’ll sell them to everybody no matter who they’re killing. That’s the mainstay of their economy: security and arms. Even right here where I live, the border not far from where I live is being fortified with the crucial assistance of Israeli so-called security forces and corporations. That’s their job. Elbit [Systems], in this case.

There’s plenty of malevolent forces involved, and we can only hope that there will be some kind of international effort to dampen down the atrocities and the aggression before it really explodes into massive massacres on the scene and, possibly, international war, because many powerful international forces are involved.

D.B.: Turkey is also shuttling ISIS jihadi fighters from Syria, and paying their salaries to go fight with the Azerbaijanis against the Armenians.

N.C.: That’s apparently true. Turkey’s probably doing the same in Libya, one of the other places where Erdogan is trying to show his power. Yes, that’s reported in Azerbaijan.

D.B.: Armenia in 2018 had a peaceful democratic revolution led by Nikol Pashinyan overthrowing the ruling oligarchy. This is one of the few instances where there was a peaceful revolution replacing an autocratic regime in the post-Soviet states. It wasn’t well-reported on here in the U.S.

N.C.: As far as I know, there was essentially no interest in the United States. If there was, I failed to detect it. Yes it was, for once, apparently a real democratic revolution. What has happened beyond that, I don’t really know the details.

D.B.: You know my background is Armenian and I’ve been to the Republic of Armenia. It’s a relatively poor country, landlocked, has a small population of three million. I went to some villages, and I noticed that there were no young or middle-aged men in the village, so I asked around: where is everybody? And they said all the menfolk had gone to Russia because there is no work here. So Armenia is in a kind of desperate situation.

N.C.: All the more reason why there should be some major international effort to terminate the current aggression, and to try to find some way to resolve the convoluted problem of Nagorno Karabakh, where there’s an Armenian population inside an Azerbaijani controlled area. It’s not an easy one to resolve, but through reasonable negotiations that could be an outcome that is possible.

Noam Chomsky, by any measure, has led a most extraordinary life. In one index he is ranked as the eighth most cited person in history, right up there with Aristotle, Shakespeare, Marx, Plato and Freud. The legendary MIT professor practically invented modern linguistics. In addition to his pioneering work in that field, he has been a leading voice for peace and social justice for many decades. Chris Hedges says he is “America’s greatest intellectual” who “makes the powerful, as well as their liberal apologists, deeply uncomfortable.” He is Institute Professor Emeritus in the Department of Linguistics and Philosophy at MIT and Laureate Professor of Linguistics and Haury Chair in the Program in Environment and Social Justice at the University of Arizona. At 91, he is still active, writing and giving interviews to the media all over the world. He is the author of scores of books, including Propaganda & the Public Mind, How the World Works, Power Systems and Global Discontents with David Barsamian of Alternative Radio.

David Barsamian is the award-winning founder and director of Alternative Radio, the independent weekly audio series based in Boulder, Colorado. He is the author of numerous books with Noam Chomsky, Howard Zinn, Eqbal Ahmad, Tariq Ali, Arundhati Roy and Edward Said. His best-selling books with Chomsky have been translated into many languages. His latest books are How the World Works and What We Say Goes (both with Noam Chomsky) and Targeting Iran. David’s interviews and articles appear in The Progressive, Z and other publications. He is winner of the Media Education Award, the ACLU’s Upton Sinclair Award for independent journalism, and the Cultural Freedom Fellowship from the Lannan Foundation. The Institute for Alternative Journalism named him one of its Top Ten Media Heroes.