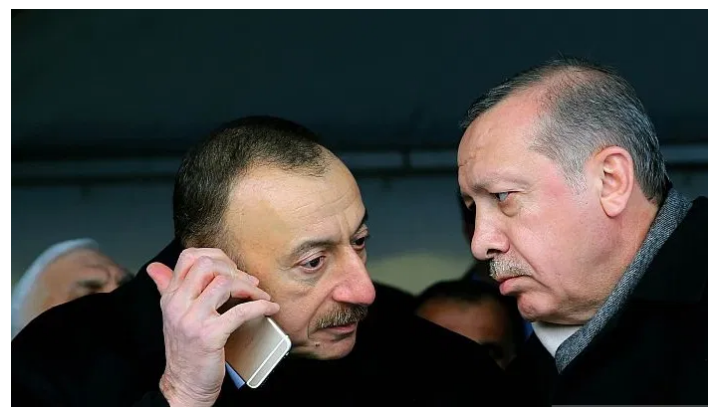 Last week, when Azerbaijan’s President Ilham Aliyev held a victory parade in Baku, he expressed his appreciation to Turkish President Recep Tayyip Erdogan who attended the ceremonies. Tens of thousands of Azeris turned up in the streets singing the praises of Turkey and waving Turkish and Azeri flags. The two presidents uttered lavish words for one another and repeated their catchphrase, “one people, two states.”

Even though the Turkish military and its advanced drones played a decisive role in the recent Artsakh war, both Aliyev and Erdogan repeatedly lied about Turkey’s involvement in the war, just as they lied about the transfer of Syrian mercenaries to Azerbaijan to fight against the Armenian troops. The successful Azeri/Turkish/mercenary war cemented the influence of Turkey over Azerbaijan and its policies. Many commentators have described this situation as the occupation of Azerbaijan by Turkey. Since the Ottoman army seized Baku one hundred years ago, this is the first time that the Turkish military has reached the shores of the Caspian Sea. This reality is reinforced by the November 9, 2020 agreement signed by Armenia, Azerbaijan and Russia, which provides for a route across Armenia linking Azerbaijan proper with Nakhichevan, thereby allowing Turkey access to Azerbaijan and the chance of going beyond to connect with other Turkic republics, thus realizing the age-old dream of Pan-Turanism.

But the Azeri-Turkish relations have not always been this warm and jovial. In 2009, when Armenia and Turkey were negotiating the protocols to open their mutual border, Azerbaijan was furious that Turkey would consider making such an move with Armenia, while ignoring the interests of Azerbaijan.

Wikileaks revealed a “Secret” cable dispatched by the U.S. Embassy in Baku to the Department of State reporting on the over one-hour long meeting held on April 3, 2009, between Pres. Aliyev, Foreign Minister Elmar Mammadyarov, Matthew Bryza, the U.S. co-chair of the Minsk Group of negotiators on the Artsakh conflict and Anne Derse, the U.S. Ambassador to Azerbaijan. The cable was titled, “Pres. Aliyev Reasonable on Nagorno-Karabagh Options, Still Furious with Turkey.”

In the summary paragraph, the cable stated that “Aliyev hid none of his outrage at Turkey’s apparent disregard for Azerbaijan’s interests, and the intensity of his display seemed calculated to underscore the seriousness of the repercussions for Turkey if Azerbaijan’s interests in NK [Nagorno Karabagh] are sacrificed for the sake of the Armenian accord.”

Under the subtitle, “Resentment at Ankara’s Betrayal,” the cable stated that “Aliyev responded with a lengthy and bitter indictment of Turkey as a ‘liar, cheat and betrayer’ of Azerbaijan. Noting that the consequences of the current volatile situation in the region are unpredictable, he complained that Azerbaijan had quietly supported the recent improvement in Turkish-Armenian relations, including President Sargisian’s ‘football diplomacy,’ never dreaming that Turkey ‘would cheat us’ by delinking progress on NK from that process. [Turkish] President Gul had promised that there would be no doors or borders opened for Armenia without progress on NK, Aliyev asserted. ‘He lied, I no longer trust him.’”

The cable then stated: “Aliyev noted that when he met Prime Minister Erdogan in Davos this January [2009], Erdogan had said nothing about the steps Turkey was contemplating with Armenia…. After Davos, Erdogan had sent Foreign Minister Babacan to Baku to explain what was occurring with Armenia with respect to re-establishing relations. ‘Babacan asked for my support, saying we should try to make progress ‘in parallel’ on NK,’ but without linkage, Aliyev said incredulously. Aliyev told Babacan Azerbaijan would not support Turkey’s steps with Armenia without progress on NK and outlined ‘all the possible consequences for Turkey and this region’ if Turkey pursued this course. The Turks asked that Aliyev keep the conversation confidential. Aliyev agreed, he said, but shortly thereafter, RFE/RL’s [Radio Free Europe/Radio Liberty] Armenian Service reported that NK was ‘no longer an obstacle’ to improvement in Turkish-Armenian relations. This had sparked a press campaign in Azerbaijan which continues to this day, Aliyev added.”

According to the cable: “Aliyev said he had twice sent Deputy Foreign Minister Araz Azimov to Turkey to outline for the Turks what they would win and what they would lose from normalization without resolution or progress on NK, and to propose a joint Turkish-Azerbaijani statement on the matter. Azimov returned without results, and Azerbaijan now confronts ‘the reality’ that Turkey will initial, sign and ratify an agreement with Armenia to open the border and establish diplomatic relations.”

The cable continued: “Azerbaijan also can no longer maintain its posture of ‘patient silence’ about the Turkish-Armenia process, Aliyev said.  He noted that given Erdogan’s political weakness going into the recent Turkish elections, Azerbaijan had refrained from public statements to avoid impact on the vote. But ‘silence was a sign of friendship the Turks do not deserve.’ Turkey is manipulating public opinion, portraying Azerbaijan as acquiescent in its process with Armenia, so Azerbaijan must now clarify, publicly, its position.”

Furthermore, “Turkey is about to commit ‘a serious historical mistake that will never be forgotten,’ Aliyev asserted. ‘Our relations will never be the same. We are not one nation and we never will be. Our relations will be damaged, it will be a disaster on all issues, security, economy, energy,’ Aliyev continued. ‘Turkey has to decide what it will gain and what it will lose. It will lose Azerbaijan, certainly; Central Asia as well, and end Turkic solidarity,’ he continued. There will be consequences for Georgia if Turkey and Azerbaijan split. Energy negotiations will end. ‘They did everything to ruin energy cooperation,’ Aliyev said heatedly. He added later that Turkey underestimates the degree to which Azerbaijan can influence its domestic politics. Azerbaijan has never interfered in Turkish internal politics before, ‘but this is a matter of national concern,’ he warned.” Aliyev added that he felt „personally betrayed“ by Gul and Erdogan.

Aliyev concluded his remarks to the U.S. officials with a warning to Turkey, “noting that when the Azerbaijanis had asked the Turks point blank whether they had agreed to normalize with Armenia and open the border without progress on NK, the Turks ‘had not responded,’ Aliyev exploded. ‘Silence means yes…they did it! They will be on the black list always.’”

Following this meeting, Aliyev continued pressuring and threatening Erdogan and Turkey so it would not ratify the Armenia-Turkey protocols. Erdogan was forced to add a new condition to the protocols, seeking the withdrawal of Armenian troops from Artsakh which was unacceptable to Armenia. Eventually, the protocols fell apart as neither Armenia nor Turkey proceeded to ratify them by their respective parliaments.

Aliyev was successful in preventing a rapprochement between Armenia and Turkey. Now that Aliyev and Turkey have solved most of the Artsakh issue militarily, they have resumed their love fest creating an existential threat to both Artsakh and Armenia.

One hopes that new unexpected developments could revive the old feud between Aliyev and Erdogan, undermining their current close relations.