The church has no right to interfere in politics 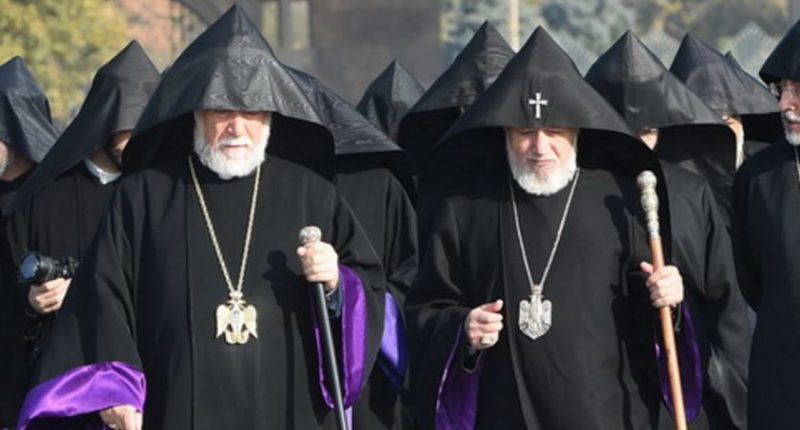 After the Azerbaijani invasion of Artsakh, with the assistance of Turkey, Russia’s intervention created peace. Meanwhile, the war claimed thousands of lives on both sides. Changes will be introduced to the Agreement, according to President Vladimir Putin.

The war upset Armenia which lost territory and lives thus created a very difficult situation and thousands of people demonstrated for weeks in the streets of Yerevan and other cities,  demanding basic changes and for Prime Minister Nikol Pashinyan’s resignation. However, some 50,000 Artsakh citizens who had left their homes and moved to Armenia, now they returned to Artsakh, indicating a positive movement. Although the military is trying to control the crowd as much as possible, the demonstrations are continuing their demands, men and women, without considering the positive steps that Pashinyan took.

PM Pashinyan said that change should occur by having new Parliamentary elections.

THEY HAVE NO RIGHT TO DO SO.

The church has no right to interfere in politics. According to the Armenian Constitution, it is mentioned very clearly and succinctly that the church and the government are detached entities, and the church cannot interfere in the affairs of the government. Yet, for whatever reason, both Catholicoi took the wrong step and issued statements asking Pashinyan’s resignation.

In this case the issue is not whether Pashinyan should resign or not, that’s a different issue, which has nothing to do with their statements.

They could have done other things – give sermons and advice to the people to calm down, to get together with real leaders and negotiate, think of other ways to have Pashinyan resign (whether he should or not that’s another issue). They have the right to speak up. Why they did not say anything during Serzh Sargsyan’s fraudulent election?

If the rule of law should be obeyed, they should follow the Constitution and not whatever they prefer or like.

I hope this point is very clear and there is no misunderstandings.

Prof. Osheen Keshishian is the editor/publisher of “Armenian Observer” weekly