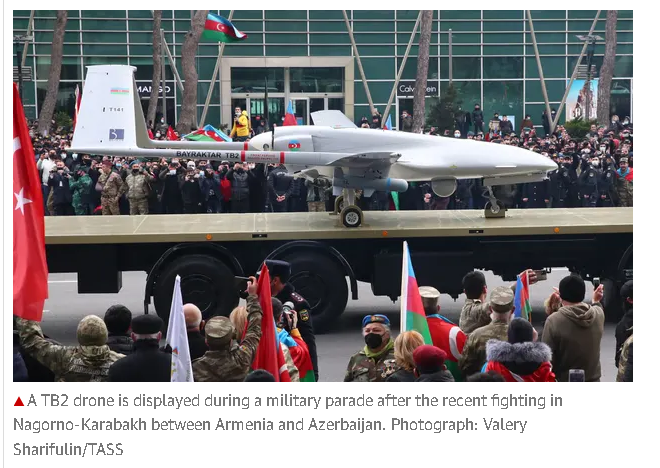 The UK’s military is expected to embark on a new armed drone programme in response to Azerbaijan’s controversial use of the technology in its victory over Armenia in the Nagorno-Karabakh conflict.

Defence officials believe that Azerbaijan’s use of cheaper Turkish drones in the six-week autumn war was crucial in defeating the Armenians, and forcing them to cede control of territory in the disputed Caucasus region.

Ministry of Defence sources added that the UK wanted to procure its own cheaper drones as part of the five-year defence review due to be unveiled early in 2021, despite warnings about the risks of the proliferation of deadly unmanned aircraft.

Earlier this month Ben Wallace, the UK defence secretary, said that Turkish TB2 drones were an example of how other countries were now “leading the way”.

The drones, he added, have “been responsible for the destruction of hundreds of armoured vehicles and even air defence systems”, although there is video evidence that suggests they also killed many people in the Nagorno-Karabakh war.

In mid-October, graphic footage in black and white emerged from Clash Report, a Twitter and Telegram account closely linked to the Turkish military, appearing to show a string of TB2 strikes targeting Armenian positions against a backdrop of jingoistic music.

Other graphic footage posted by Azerbaijan’s defence ministry in October shows what are said to be TB2 drones picking out Armenian forces and using the information to call in deadly rocket fire from elsewhere.

Manufactured by Baykar Makina, the TB2 drones cost as little as $1m to $2m each according to analyst estimates, far less than the near $20m per drone paid by the British military for a fleet of 16 high-end, next-generation Protector drones manufactured by US specialist General Atomics.

The TB2 drones have a much shorter operating range of up to 150km, but are able to loiter in the air for up to 24 hours. Because they are cheaper, military forces can afford to lose some in action.

Turkey’s TB2 drones have been rapidly altering the military balance in the region, and have been heavily used in strikes against Kurdish opposition both inside and outside the country and in Libya, in the country’s civil war.

In the summer, on the eve of the conflict, Azerbaijan purchased TB2s from Turkey – two dozen on some estimates – and deployed them so quickly and effectively it is widely believed they were operated by Turkish pilots. Drone footage was also broadcast on digital billboards in the Azerbaijani capital of Baku.

“There’s a huge PR element to this,” said Rob Lee, a doctoral student at King’s College London’s war studies department, who has been closely following the conflict. “In an environment where there is not much independent information this helped the Azeri government to control the narrative.”

A Russian-brokered truce between the two sides was signed on 9 November. Azerbaijan kept the territory it had gained while Armenia was forced to withdraw from land it had controlled adjacent to Nagorno-Karabakh.

Around 5,000 soldiers from both sides were killed but analysts on the Oryx Blog, relying on publicly available pictures and video, estimated that Armenia lost 224 tanks compared with 36 from Azerbaijan. “The Azeris use of drones was decisive,” added Prof Michael Clarke, a distinguished fellow at the Royal United Services Institute (Rusi), a military thinktank.

Several TB2 drones were downed by Armenian forces, revealing how Baykar is able to make them relatively cheaply. A report released by the Armenian National Committee of America in November included photos of components used in the damaged drone, including a navigation system from Garmin.UK army buys 30 ‚Bug‘ drones that can spy on targets 2km awayRead more

Garmin said its product was “not designed or intended for military use” and said it was asking its dealers to halt sales to Baykar. In October, Canada also suspended exports to Turkey of targeting gear made by Ontario-based Wescam – a subsidiary of US firm L3Harris – after they were found in a TB2 drone.

The document also lists two possible British components, a fuel pump made by Hampshire firm Andair, with the firm’s name clearly marked, and a bomb rack missile release system that was first developed in the UK by another L3Harris subsidiary, Brighton-based EDO MBM Technology – although Baykar said it had developed its own version since.

Andair did not reply to a request for comment.

The UK complies with a 1992 arms embargo relating to all weapons that could be used in Nagorno-Karabakh. When asked specifically about the components cited by the Armenian document, the Department for International Trade said: “We have not issued licences contrary to the arms embargo.”

One expert said the UK’s drone plans would legitimise a technology that could promote conflict in disputed areas. Chris Coles, director of NGO Drone Wars UK, said: “Civil society groups have been warning for some time that because drones lower the cost of warfare, they are likely to fuel this type of bitter, lethal conflict between neighbouring states.”