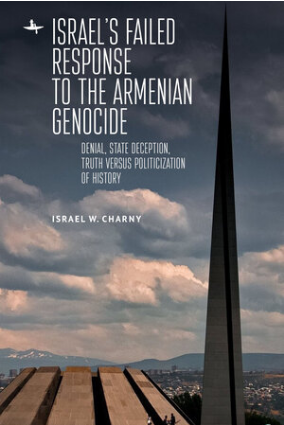 When the Turkish government demanded the cancellation of all lectures on the Armenian Genocide at Israel’s First International Conference on the Holocaust and Genocide, and that Armenian lecturers not be allowed to participate, the Israeli government followed suit. This book follows the author’s gutsy campaign against his government and his quest to successfully hold the conference in the face of censorship. A political whodunitbased onpreviously secret Israel Foreign Ministry cables, this book investigates Israel’s overall tragically unjust relationship to genocides of other peoples.

The book also closely examines the figures of Elie Wiesel and Shimon Peres in their interference with the recognition of other peoples’ genocidal tragedies, particularly the Armenian Genocide. Additional chapters by three prominent leaders—a fearless Turk who has paid a huge price in Turkish jails (Ragip Zarakolu), a renowned Armenian American who was one of the earliest writers on the Armenian Genocide (Richard Hovannisian); and a Jew, who was responsible for the selection of all the materials in the pathbreaking U.S. Holocaust Museum in Washington (Michael Berenbaum)—provide added perspectives.

srael W. Charny, Ph.D., is an American-Israeli psychologist who lives in the hills of Jerusalem. He was co-founder and then a president of the International Association of Genocide Scholars. He was also the founder and first president of the Israel Family Therapy Association and later president of the International Family Therapy Association. For him, the process of genocide starts with “cultural genocide,” especially of dehumanization and attribution of evil intent and destructive power to the victim people. He has openly made a stand against all denials of genocide including the Holocaust and, in particular, the Armenian Genocide, for which he was honored by the Armenian Presidential Gold Medal. He has authored influential books on genocide, including the Encyclopedia of Genocide, Genocide: A Critical Bibliographic Review, and Fascism and Democracy in the Human Mind, each of which were elected “Outstanding Academic Book of the Year” by the American Library Association.

“Israel Charny has single-handedly produced at least half of the seminal ideas in the history of genocide studies and genocide prevention. I wish there were a Nobel Prize in Genocide Studies. If there were, he should get the first one.”

“Israel Charny has brilliantly captured over a hundred years of evasions and denials by the Turkish Government for the genocide that extinguished the lives of a million and a half Armenian souls. Armenians also lost a thousand years of their culture. This monumental crime against the Armenian nation must be recognized. To do less calls into question the integrity of all those victims of similar crimes, regardless of origin. It is ironic that the person who coined the word ‘genocide’ in 1944, Rafael Lemkin, was himself of Jewish faith, and the State of Israel should have been the first nation to recognize the Armenian Genocide, and I am sure things since then would have been different in the world. I heartily congratulate Charny for deftly exposing the many contradictions in our world towards our nation’s Genocide, and pray that this book will serve the purpose to wake up Israeli politicians.”

“This is a very important, courageous and original book. [… It] describes [how] Israeli government leaders succumbed to Turkish demands and attempted to close down the 1982 conference that was a milestone event in the struggle against denials of historically known genocides. With intellectual integrity, Charny criticizes the disrespect of the State of Israel to other genocides. When you deny another’s genocide, you betray your own genocide; when you deny genocide of the present or of the past, you prepare the ground for a new one. It also presents a particularly fascinating in-depth picture of Elie Wiesel’s complicated role in the process. Charny is a brave scholar—one of the rare academics who risks speaking about Israeli crimes such as the State of Israel selling weapons to other governments that commit genocide or about crimes toward the Palestinian people during the War of Independence—the Nakba. This is a significant text that will probably be of wide interest in the world, and at the same time it will probably be an unexpected read for many people in Israeli society.”

— From the Foreword by Yair Auron, Prof. Emeritus, Open University of Israel, author of The Banality of Denial: Israel and the Armenian Genocide

“I applaud Prof. Charny’s relentless yet respectful crusade and especially this seminal book that sheds disturbing light on our country’s deplorable mishandling of the issue, yet upholds a hope for its positive transformation. Like many others I am unable to comprehend official Israel turning a blind eye to the Armenian Genocide by Turkey. No realpolitik can justify such immoral conduct, nor the false claim that it may cost Jewish or Israeli lives. As a scholar of Medicine’s role in the Holocaust, my colleagues and I summon health professionals to become Genocide Watchers and do their utmost to identify and prevent such calamities. We also call on all health professionals to incorporate in their professional identity the dangers of the inherent potential for abuse of power in healthcare. These obligate a full and transparent acknowledgement of the Armenian Holocaust (in which unfortunately once again physicians played a decisive role).”

“Charny dissects the Israeli government’s unscrupulous and shameful non-recognition of the Armenian Genocide with the precision of an academic scalpel. He uses the Israeli Freedom of Information Act to reveal the ugly political untruths from never-before-seen archival documents of Israel’s Foreign Ministry about the Israeli government’s […] failed attempt to block an academic conference held in 1982 in Israel on the Jewish Holocaust, the Armenian Genocide, and other genocides. Even though he is a patriotic Israeli citizen, Charny places his humanitarianism ahead of his nationalistic feelings. This book vindicates him as an honest scholar and a good human being who exposes the lies of his own government, insisting that Israel should have been the first country to recognize the Armenian Genocide, not the last.”

“[This book] is bound to be a classic in the literature of genocide studies. It is a fascinating, disturbing and revelatory work. The book addresses the planning and implementation of the first international conference ever held on the subject of genocide (other than the Holocaust), and Turkey’s all-out efforts to pressure the State of Israel [to persuade] Charny to disinvite all Armenians […] from the conference. To assert that Charny’s stance was courageous doesn’t even begin to speak to the courage he displayed. A must-read for anyone interested in what it means to take a moral stand and not bend, and for anyone interested in the history of the founding of the field of genocide studies.”

“The book you are holding is a must-read. Here are a Turk, Armenian, and Jew coming together to deliver an intensely poignant and meaningful message to us all: those who deny the reality of a genocide perpetrated upon others largely lose their credibility when speaking of genocides perpetrated against themselves. These documents show us how those who deny the Armenian genocide on the pretext of national security are indirectly admitting their own capability to carry out precisely such a crime themselves.”

“Israel Charny’s book revisits one of the turning points in the study of human barbarity: the First International Conference on the Holocaust and Genocide held in Tel Aviv in 1982. In what amounts to a historical whodunit, he shows how systematic attempts to isolate the Holocaust experience of World War II from the Armenian genocide that preceded it at the height of World War I were deflected, and a new norm of comparative genocide studies was established. Since then, the specificities of each attempt at eradicating a group because of its beliefs, ethnic background or geographic origin—be they Jews, Armenians, Yazidis, Bosnians, Tutsis, Rohingyas or any other people—are studied within the context of features common to a long list of efforts to eliminate marginalized and discredited communities. This change—which now has been picked up by Black Lives Matters and similar movements—owes a great deal to the courage of Professor Charny and his colleagues, who stood up to immense political and psychological pressures to insist on the unwavering equality of all human beings—not only in life and sickness, but also in death and remembrance.”

“Israel Charny is one of those indefatigable scholars—Jonathan Swift is another—whose fierce indignation is necessary to our age and who fight the most necessary battles at the right moment. Charny’s latest work proclaims that every genocide is unique but that none has the right to claim unique suffering, and that denial is the final stage of genocide. He thus speaks to the future as well as the past. He holds his own Israeli government to account for its failure to acknowledge the 1915 Armenian mass murders as genocide. He even proves that the Israeli authorities invented threats to the Jewish community in Turkey in 1982 in a vain attempt to curtail a Jerusalem Holocaust and genocide conference he helped to arrange—and thus curtail all discussion on the Armenian genocide. At the same time, he makes no cheap shots—he admires Israel even when he undermines its outrageous denial.”

“This book tells an important and fascinating story. Drawing on revealing, newly declassified Israeli documents, it deals with a major moment not only in the formation of the field of genocide studies, but in global intellectual history, not to mention behind-the-scenes diplomatic skullduggery. This was a key point at which states, scholars, and public figures were challenged to come to terms over the past and future of genocide, its meaning for surviving victims, and its continuing threat to humankind. The book movingly illuminates these challenges, interactions, successes and failures, personal and political. The author deserves congratulations on his pioneering role in the unfolding events, and for assembling this conclusive, multifaceted account. The Foreword and the various contributed chapters are written by a stellar team of highly qualified, respected scholars and authors. I very strongly recommend this book.”