Pentagon may send warships to Black Sea in support of Ukraine 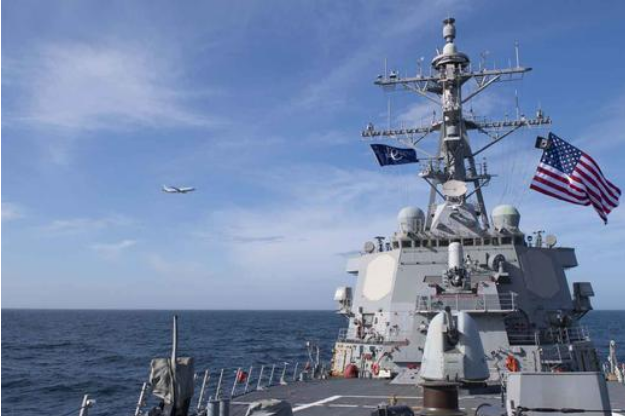 The U.S. is considering sending Navy warships into the Black Sea to show support for Ukraine as Russia builds up its troops and military equipment on the U.S. ally’s eastern border.

The Navy routinely sails its ships through the Black Sea — which touches nearly all of Ukraine’s southern border — but a new deployment would signal to Moscow that Washington is on watch, a Defense Department official told CNN on Thursday.

If the U.S. were to move forward with a deployment, it would have to give Turkey 14 days notice of its intent to enter the Black Sea, as required under a 1936 treaty which gave Ankara control of the seas’ straits.

Asked by The Hill whether the Pentagon was considering the move and if the United States had given notice of intent to enter the Black Sea, a spokesman referred all questions to U.S. Navy Europe.

The Pentagon official who spoke to CNN said the Navy will continue to fly reconnaissance aircraft over the Black Sea in international airspace to keep an eye on Russian ship activity and possible troop movements in Crimea, which Moscow seized from Ukraine in 2014.

Intelligence reports indicate Russia is holding training and exercises with no perceived orders for additional military action, but the situation could change quickly, according to the Defense official.

The Biden administration has been on alert ever since Russia upped its saber rattling in Eastern Europe last month, with fighting resuming between Moscow-backed separatists and Ukrainian soldiers in eastern Ukraine, ending a cease-fire the two groups made last summer.

U.S. European Command, meanwhile, has raised its alert status to its highest level.

“We call on Russia to make their intentions more clear as to what they’re doing with these array of forces along the border and we continue to call for the ceasefires that were called for by the Minsk Agreement,” Pentagon spokesperson John Kirby told reporters Tuesday.

He added that it was important “to de-escalate the tensions along that border” and “for the territorial integrity and the sovereignty of Ukraine to be respected by Russia.”

Russian President Vladimir Putin this week accused Ukraine of provocative action in the country’s eastern region during a phone call with German Chancellor Angela Merkel. Putin claimed it was Kyiv that was “inflaming the situation there.”