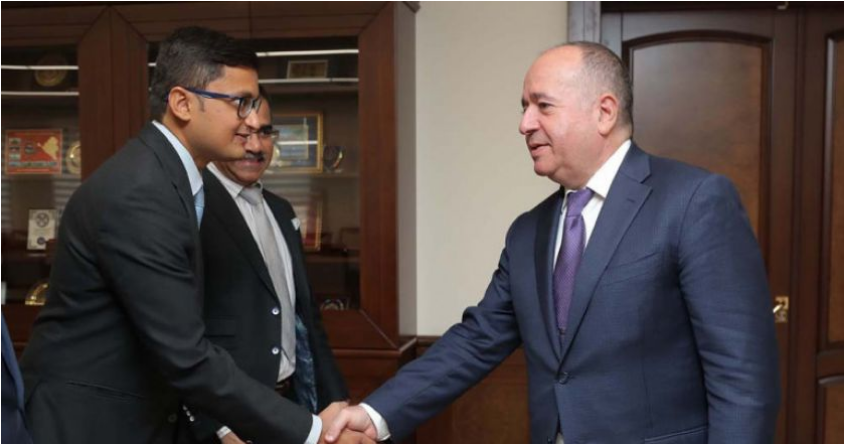 Azerbaijan’s “victory” in the Nagorno-Karabakh War was an important geopolitical win for Turkey, which Erdoğan described as part of Turkey’s quest for its “deserved place in the world order.” This is not only about the Armenian issue, but also in terms of Turkey’s greater influence over Azerbaijan. Turkey made huge profits from its arms sales to Azerbaijan; it also established an unprecedented presence in Azerbaijan, having become an important player in the post-Soviet South Caucasus, where it was not a regional player before.

Stronger Turkish presence in the South Caucasus will in turn strengthen the Turkey-Azerbaijan-Pakistan alliance and their common ambitions. It must be recalled that Pakistan’s military assistance has been instrumental in helping Azerbaijan win the 2020 Nagorno-Karabakh War. In addition to official support, Pakistan also reportedly helped Turkey to channel mercenaries to Nagorno-Karabakh. There is little doubt that Pakistan would support the opening of a “corridor” through Armenia, especially as the three countries on January 13 announced through their Foreign Ministers, that they would collectively support each other’s ambitions for territorial expansion.

Should Turkey and Azerbaijan succeed in having a land connection through Armenia, it would provide Turkey a direct outlet to the gas and oil rich Caspian Sea, where it wants to engage in joint development of a gas field, possibly with China. According to Emil Avdaliani, Turkey can use Azerbaijan’s geographic position as a springboard to reach out to Central Asia, upend the geopolitics of connectivity in the region, as well as deepen its economic, energy and security cooperation with the Turkic states of Central Asia, where it has already established its influence.

Among other things, this “corridor” will make it easier to transport weapons and mercenaries to Central and South Asia, including in support of Pakistan against India in Jammu and Kashmir. Turkey’s access to Central Asia will in the long run allow it to project its influence to unprecedented heights, something which will threaten India’s national security and territorial integrity.

Given the competition between Turkey, China and Russia for establishing dominance in Central Asia, their military and economic presence in the region will limit the expansion of India’s infrastructural projects towards the north, unless India is a player in this game.

It is thus in the interests of India to help Armenia prevent the Turkish-Azerbaijani advancement into its territory and subsequently to Central Asia.

How India and Armenia can Balance Turkey-Azerbaijan-Pakistan Axis

While India has enormous economic and military power, Armenia is geostrategically located between Turkey, Azerbaijan, Georgia and Iran. Armenia is a strategic ally of Russia – it is a member of the Collective Security Treaty Organization and the only member of the Eurasian Economic Union which borders Iran. This is of importance to India if it aims to develop closer ties with Eurasia and Iran. Armenia also maintains good relations with the European Union and the United States, and traditionally defends India’s position on the Jammu and Kashmir issue. Armenia’s strategic objective is to counter the Turkish-Azerbaijani threat and to develop its statehood independent of the hostile neighbors and in cooperation with its allies.

India and Armenia are natural allies, with a lot of untapped potential for cooperation on issues of mutual interest. Armenia has a visa-free regime with India, and a great number of Indian citizens visit Armenia for studying and working. There is also a potential of developing cooperation in infrastructure projects, military, IT and other sectors.

Most recently, the Pakistan-Azerbaijan-Turkey axis pushed India to increase its interest in Armenia. An important development was when India, through its ambassador in Iran, announced that New Delhi is planning on connecting the southeastern Iranian port of Chabahar and the Indian Ocean with Eurasia and Helsinki through the territory of Armenia (rather than through Azerbaijan, as initially planned). The project has a potential of bringing forth a major change in the region in favor of Armenia – a scenario which is strategically important for Iran also, whose interests align with those of Armenia.

INSTC is a major economic project that was initiated in 2000 by Russia and India. It is a 7,200-km long multi-mode network comprised of rail, road and water routes that aims to reduce costs and travel time for freight transport, and to boost trade between Russia, Iran, Central Asia, India and Europe. It is 30 percent cheaper and 40 percent shorter than the current route. It promises to provide India faster and more efficient access into Central Asia and Europe.

Armenia and Iran have friendly relations, and common strategic and geopolitical interests in the region. They help one another to avoid isolation. Predominantly Shi’a Iran is also in competition with Turkey for dominance in the region and the Muslim World. While Iran has avoided taking sides between Armenia and Azerbaijan in the Nagorno-Karabakh conflict, it has clearly stated that it is against any changes of the Iran-Armenia border, and that the territorial integrity of Armenia is a red line for Iran.

Thus, any Turkish-Azerbaijani “corridor” running along its border with Armenia that aims to territorially expand Azerbaijan or Turkey, will be opposed by Iran as it would jeopardize the security of Iran’s Northern border, as well as its route to Europe. For this and other reasons, Iran is making active steps towards building closer ties with Armenia, especially in developing infrastructure and transport communication projects, such as the Persian Gulf-Black Sea International Transport and Transit Corridor (involving Armenia, Iran, Georgia, Bulgaria and Greece) and the North South Transport Corridor.

INSTC connects India’s Mumbai to Iran’s railway and highway network through the port of Bandar Abbas, one of the main gateways to the Gulf region. The corridor also intends to run through Chabahar on the Gulf of Oman (a part of the Free Zone), which is the only Iranian port with direct access to the Indian Ocean. India has already made major investments in Chabahar and plans to turn it into the most powerful port in the region. Chabahar gives India a sea-land access into Afghanistan and Central Asia through Iran’s eastern borders, and serves as a venture for development of regional maritime transit traffic to the wider region. Most importantly, Chabahar brings India closer to Iran, bypassing Pakistan.

The Chabahar Port is exempt from American sanctions as it is less than 200 kilometers from the Chinese-invested Gwadar Port in Pakistan, which also serves as the hub for the China-Pakistan Economic Corridor (CPEC). Since India views China’s heavy investment in Gwadar as a part of China’s “strategic encirclement” policy against India, by investing in Chabahar, India aims to leave Gwadar out of competition and cut Pakistan’s rout that connects Afghanistan and Central Asia with the Indian Ocean, thereby challenging China’s penetration into Central Asia.

Armenia has been building its own North-South Road Corridor which runs from Armenia’s southern border with Iran to its northern border with Georgia. The construction of this highly important strategic road will ensure easier traffic from the southern border of Armenia to the Georgian border in the north, and onwards onto Georgia’s Black Sea ports. This will allow passenger and cargo transportation in accordance to European standards. The estimated cost of the Project is $1.5 billion, and major investors like the Asian Development Bank (ADB), European Investment Bank (EIB) and Eurasian Development Bank (EDB) have contracts to finance the construction.

Indian companies could also become investors in this major regional project. While much of the highway has already been constructed, the completion of the project requires more investment. India’s announcement of including Armenia into the INSTC was met with enthusiasm in Armenia and was regarded as an opportunity to strengthen its economy, security and geopolitical position vis-à-vis Turkey and Azerbaijan. By getting involved in this project, Armenia will connect Iran’s Chabahar port with Europe (all the way to Scandinavia) via Russia, and Greece via the Black Sea and Bulgaria. This will make Armenia a player in international trade routes and attract foreign investments in its road and railway projects.

Chabahar’s link with Armenia will not only allow Indian products to reach European markets, but also increase the geopolitical value of the port by allowing it to also be used against Turkey and its aspirations for regional hegemony. The creation of an economic corridor in Armenia’s Syunik province from North to South, as opposed to Turkish-Azeri corridor from East to West, can well end the joint Turkish-Azerbaijani ambition to consume Syunik province from Armenia and have a contiguous Turkic economic corridor at the expense of Armenian sovereignty. Both Iran and India will have an additional vested interest in defending this region from Turkish-Azeri control.

By including Armenia into these new trade and transportation corridors to Europe, New Delhi is also demonstrating that it is not just interested its own immediate neighborhood, but is now defending its national security thousands of kilometers away, advancing itself as a global power and not just merely a regional one. By severely hindering Turkey’s access to Central Asia, India is thereby preventing new points of pressure that can be turned against it, particularly in Jammu and Kashmir.

For realizing this scenario, it is important to seize the current momentum, because should a Turkish-Azerbaijani presence be established in Armenia, it may block the possibility of alternative transportation routes. While there are many technical, financial, political and other issues that need to be overcome in order to bring this project to life, running the INSTC through Armenia can be a game changer.

The bigger picture thus shows that there is an urgent need for boosting the INSTC and its Armenian section, as well as for a closer cooperation between India and Armenia on many other fields to counter Turkish and Azerbaijani expansionism in the South Caucasus and beyond.

Nvard Chalikyan is an international relations expert, based in Armenia. She has worked as a researcher and consultant in leading Armenian and international think tanks, and has contributed articles to online newspapers. Her research interests include Russian foreign policy, international security, geopolitics of South Caucasus and conflict resolution. Nvard has an MPhil in International Relations from Cambridge University.

Paul Antonopoulos is a Doctorate researcher based in Athens. He has a special interest in international relations, with a particular focus on multipolarity and the geographic space between ancient civilizational countries stretching from Greece to India. He frequently appears on television, radio and online/print media as a geopolitical expert.