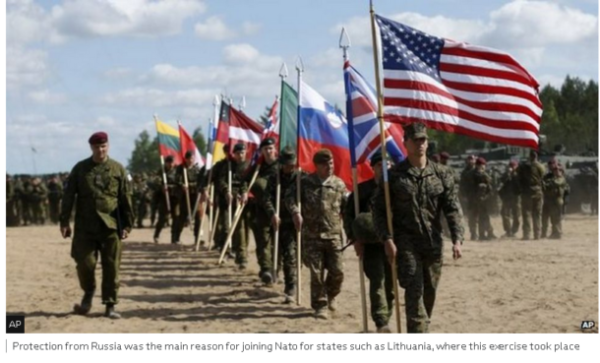 Miscalculations by the west opened the way for Russia’s invasion. As Kyiv’s outgunned forces fight for survival, the alliance risks another catastrophic failure

A shield deters an enemy and signifies resolve. It is also something to hide behind, in order to avoid a fight. Since Russia invaded Ukraine, the North Atlantic Treaty Organisation has been used for both purposes by US and European politicians of varying degrees of valour.

But what if the shield is broken or fundamentally flawed? The western powers may be about to find out. Nato’s summit in Madrid this month is billed as its most consequential, “transformative” gathering since the cold war era. Expect much self-congratulation over how the 30-country alliance united to protect the “free world” against Russian aggression. Yet huge question marks remain.

Speaking in Poland in March, Joe Biden, US president and de facto Nato boss, set the tone. He vowed to defend “every inch of Nato territory with the full force of our collective power” – while keeping out of the war. Months later, Biden remains infuriatingly vague about long-term outcomes.

Ben Wallace, the UK’s defence secretary, echoed this refrain last week in Iceland. Russia’s Vladimir Putin may target Lithuania, Latvia and Estonia next, Wallace warned, because, like Ukraine, he does not view them as “real” countries. But, like Biden, Britain has no discernible plan to ensure that an independent Ukraine survives.

While many allies have stepped up, important European Nato members cower behind an alliance they previously disparaged and neglected. They use it to avoid making costly national commitments to Kyiv that might anger Moscow.

As for Ukraine, its leadership has all but abandoned hopes of membership, solemnly promised at Nato’s 2008 Bucharest summit, and has ceased calling for direct military intervention. “Of course, we will hear words of support… we are very grateful for that,” said its foreign minister, Dmytro Kuleba. Having previously accused Nato of “doing nothing”, he doe

s not expect concrete action in Madrid on accession or, for example, “Black Sea security”.

It’s one of many areas where Nato could and should be exerting greater pressure on Russian forces, so helping persuade Putin to end his genocidal war.

Why is Nato not doing more? Taken together, all the rationales and excuses for passivity and inaction produce a picture of an alliance significantly less united, powerful and organised than its admirers pretend.

Initially backing Ukraine, albeit at arm’s length, gave Nato a boost. Its stock rose from the low-point of last year’s Afghan withdrawal debacle.

But if, as expected, the war grinds on, if both sides grow desperate, if the diplomatic impasse deepens, and if the threat of wider conflict rises, Nato’s long unaddressed weaknesses and vulnerabilities will become both more obvious and more hazardous for those crouching behind its battlements. Its post-Soviet bluff may finally be called.

It would be unrealistic to expect seamless political unanimity in so large an organisation. But the fact that each member has an equal say when, in terms of military capacity, they are absurdly unequal, hinders swift, bold decision-making. A Russian nuclear or chemical provocation, for example, would be likely to produce a paralysing cacophony of conflicting voices within Nato – and Putin surely knows it.

At the same time, there is huge over-reliance on the US, a military superpower without whose agreement nothing happens and behind whose might the laggards lurk, refusing to pay their way.

Organisationally and militarily, too, Nato is all over the place. It has three joint command headquarters – in Italy, the Netherlands and the US. But its top general is based in Belgium. Inter-operability of different countries’ weapons systems is lacking, as are joint training exercises, arms procurement and intelligence-sharing.

Nato is also increasingly overstretched, caught between a Russian threat in the Euro-Atlantic area and challenges in the Indo-Pacific from an aggressively expansionist China.

Leaders from Japan, South Korea, Australia and New Zealand are expected in Madrid. Their shared nightmare: a “no limits” totalitarian Sino-Russian global axis with echoes of the 1939 Nazi-Soviet pact.

Nato is due to publish its 10-yearly “strategic concept” on how to deal with all this, plus trans-national terrorism, destabilising climate change, cyber warfare and the rise of anti-democratic states. It’s a tall order.

Overdue, too, is the Biden administration’s new Asia-focused national security strategy, which had to be hastily recalibrated following the Ukraine invasion.

Yet if it is to move forward effectively on these numerous fronts, Nato must also look back, admit past mistakes and accept some responsibility for the current crisis.

By keeping Ukraine in membership limbo while failing to punish Putin for war crimes in Chechnya and Syria, his 2008 attack on Georgia, his annexation of Crimea and his post-2014 Donbas proxy war, complacent western leaders unwittingly paved the way for today’s catastrophe.

After the Soviet collapse in 1991, Nato dropped the ball. Like football fans invading the pitch before the final whistle, they thought it was all over! But it wasn’t, and it isn’t.

Right now, Putin is battering the shield, putting the west to the test. If its risk-averse approach does not change, there may soon be nowhere left to hide. Will Nato fail again?