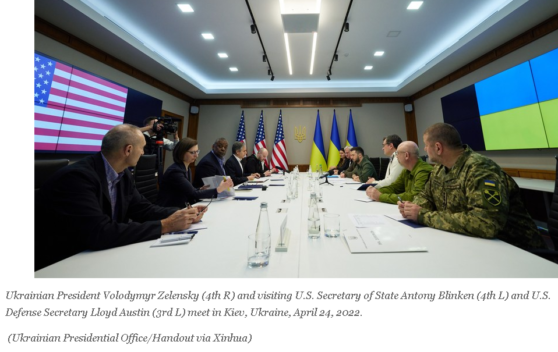 * While most of the world is working to help achieve a peaceful settlement, Washington is erecting a slew of roadblocks in the way of Russia-Ukraine negotiations, including providing massive military aid for Ukraine and coercing other countries into sanctioning Russia.

* „The West’s military aid seeks to exhaust and drain Russia’s capabilities, and the Russians understand this,“ said Tariq Fahmy, a political science professor at the Cairo University in Egypt.

* Despite Washington’s pressure to take sides in the Russia-Ukraine conflict, many Asian, African, and Latin American countries have chosen to remain neutral and advocate peaceful solutions.

BEIJING, June 3 (Xinhua) — With the Russia-Ukraine conflict entering its 100th day and still dragging on, the call for a peaceful resolution is growing stronger.

However, while most of the world is working to help achieve a peaceful settlement, Washington is erecting a slew of roadblocks in the way of Russia-Ukraine negotiations, including providing massive military aid for Ukraine and coercing other countries into sanctioning Russia.

The bleak reality on the ground begs the question of how the world can prevent such a conflict from recurring. Experts believe that the Ukraine crisis has highlighted the dangers Cold War-era security concepts, such as bloc confrontation, pose to global peace and stability.

Following a visit to Ukraine’s capital city of Kiev in late April, U.S. Secretary of Defense Lloyd Austin was asked by reporters to define „America’s goals for success“ in Ukraine.

After repeating Washington’s talking points that Ukraine would remain „a sovereign country, a democratic country, able to protect its sovereign territory,“ Austin revealed that the United States hopes Russia will be „weakened“ by the conflict.

„It (Russia) has already lost a lot of military capability and a lot of its troops, quite frankly, and we want to see them not have the capability to very quickly reproduce that capability,“ he said.

Austin’s admission that Washington wishes to „weaken“ Russia made many wonder what America’s true goal for the Russia-Ukraine conflict is.

„The West’s military aid seeks to exhaust and drain Russia’s capabilities, and the Russians understand this,“ said Tariq Fahmy, a political science professor at the Cairo University in Egypt.

„Instead of pacifying or resolving this crisis through diplomacy, the United States has begun to play around with it a little more,“ according to Umit Alperen, an analyst with Turkey’s Ankara Policy Center.

„The United States most likely wants the conflict to continue, and that is its intention from the beginning,“ said Alperen.

While the Western media has overwhelmingly painted Russia’s special military operation in Ukraine as entirely unprovoked, many scholars, including Robert Kagan, Stephen and Barbara Friedman Senior Fellow at the Brookings Institution, argued that such an association is misleading.

„Just as Pearl Harbor was the consequence of U.S. efforts to blunt Japanese expansion on the Asian mainland, and just as the 9/11 attacks were partly a response to the United States‘ dominant presence in the Middle East after the first Gulf War, so Russian decisions have been a response to the expanding post-Cold War hegemony of the United States and its allies in Europe,“ Kagan wrote.

What Kagan was referring to was U.S.-led NATO’s relentless expansion at the expense of Russia’s security concerns. Since 1999, NATO has expanded eastward five times, advancing more than 1,000 km all the way to the Russian border, gradually pushing Russia into a corner.

As the Russia-Ukraine conflict grinds on, the United States has increased its support for Ukraine with a 40-billion-U.S.-dollar aid package, including 20 billion dollars in military assistance. Washington has also attempted to corral its allies as a bloc to economically sanction Russia.

Despite Washington’s pressure to take sides in the Russia-Ukraine conflict, many Asian, African, and Latin American countries have chosen to remain neutral and advocate peaceful solutions.

After 17 African nations abstained and another eight African nations did not vote in a UN vote condemning Russia in early March, U.S. Ambassador to the United Nations Linda Thomas-Greenfield „practically demanded that they (African countries) take a stance that follows the American position,“ as commented by Murtaza Hussain, a reporter with The Intercept.

Thomas-Greenfield reportedly said then that she believed that „we have to do additional work to help these countries to understand the impact“ of the Ukraine crisis.

In their interviews with Xinhua, African scholars argued that because developing countries are on the receiving end of Western sanctions against Russia, they understand better than U.S. politicians the impact of an unstable world on their countries.

„The arms industry in America is one of the biggest beneficiaries. And then, of course, by putting sanctions on Russia, they want to make sure that Russia’s economy is battered,“ said Stephen Ndegwa, an international relations lecturer at the Nairobi-based United States International University-Africa in Kenya.

„With high oil prices and supply chain disruptions, Africa and other developing countries are experiencing one of the most significant increases in essential commodities,“ Ndegwa said.

Thomas-Greenfield’s choice of words „not only smacks of hubris, it paints a picture of African countries as moral adolescents who require Western supervision in order to understand and do what is right,“ wrote Ebenezer Obadare, Douglas Dillon Senior Fellow for Africa Studies at the Council on Foreign Relations, adding that there is a longstanding perception that powerful Western countries, and the United States in particular, do not always live up to their own moral rhetoric.

Most countries have refrained from supporting America and its Atlantic Alliance, according to Adnan Bourji, director of the Lebanese National Center for Studies, „because they (the West) have provided the world with nothing but wars, devastation, and destruction for many decades.“

People in most parts of the world will never forget that „Western progress was built on the resources of the poor countries that they have colonized for centuries, and that the American administration is responsible for the majority of modern-era wars,“ said Bourji.

For the New York-based scholar Pang, „it is a very interesting moment in world history in which the West have never been more separate from the rest of the world.“

„They have never seemed so disconnected in their views from attitudes in other parts of the world,“ said Pang.

Some people in the West have also pondered the mere anachronism of U.S. hegemony in an increasingly multipolar world.

„Over the longer term, Americans must realize that in an increasingly multipolar world, reckoning with the limits of their power is critical for achieving a more peaceful and just world,“ Zeeshan Aleem, an opinion columnist with MSNBC, wrote in March.

„The U.S. may want to be the only great power in the world, free to expand its hegemony with impunity, but it is not. Refusing to see this is dangerous for us all,“ the article concluded.

Across the Atlantic, former French Ambassador to the United States Gerard Araud lamented that Western countries „underestimate the resentment of the rest of the world against us.“

„I am convinced that even if they don’t particularly like Russia, a lot of non-westerners are supporting it only because it is confronting us,“ he tweeted.