100 years ago, the U.S. invaded and occupied this country. Can you name it?

A century ago, American troops invaded and occupied a foreign nation. They would stay there for almost two decades, install a client government, impose new laws and fight insurgents in bloody battles on difficult terrain. Thousands of residents perished during what turned out to be 19 years of de facto U.S. rule.

The country was Haiti, the Caribbean nation that’s often seen by outsiders as a metaphor for poverty and disaster. Yet rarely are Americans confronted with their own hand in its misfortunes.

[Is it time for France to pay its debt to Haiti?]

On Tuesday, a group of protesters marched to the U.S. Embassy in the Haitian capital Port-au-Prince in commemoration of the grim legacy of the U.S. occupation, which began in July 1915 after President Woodrow Wilson used political chaos and violence in the country as grounds to intervene. Some in Washington feared the threat of competing French and German interests in the Caribbean.

The liberal, democratic values Wilson so famously championed in Europe were not so visible in Haiti, a largely black republic that since its independence from France a century earlier had been regarded with fear and contempt by America’s white ruling classes. „Think of it! N——s speaking French,“ quipped William Jennings Bryan, Wilson’s secretary of state, in a chilling echo of the Jim Crow-era bigotry of the time.

Though framed as an attempt to bring stability to an unstable, benighted land, the United States „also wanted to make sure that the Haitian government was compatible to American economic interests and friendly to foreign investment,“ writes Laurent Dubois, a Duke University academic and author of „Haiti: The Aftershocks of History.“

„In Haiti, the reality of American actions sharply contradicted the gloss of [American leaders‘] liberal protestations,“ wrote the historian Hans Schmidt, whose 1971 book on the U.S. occupation is still a widely cited text. „Racist preconceptions, reinforced by the current debasement of Haiti’s political institutions, placed the Haitians far below levels Americans considered necessary for democracy, self-government, and constitutionalism.“

It was also a moment where Washington did little to disguise its sense of imperial entitlement in the neighborhood. A number of fledgling governments in the Caribbean and Central America all suffered U.S. invasions and the imposition of policies favorable to American strategic interests and big business. Banana republics didn’t just spring up on their own.

Here’s a summation of events in Haiti from the U.S. State Department’s Office of the Historian:

The United States gained complete control over Haitian finances, and the right to intervene in Haiti whenever the U.S. Government deemed necessary. The U.S. Government also forced the election of a new pro-American President, Philippe Sudré Dartiguenave, by the Haitian legislature in August 1915. The selection of a President that did not represent the choice of the Haitian populace increased unrest in Haiti.

Following the successful manipulation of the 1915 elections, the Wilson administration attempted to strong-arm the Haitian legislature into adopting a new constitution in 1917. This constitution allowed foreign land ownership, which had been outlawed since the Haitian Revolution as a way to prevent foreign control of the country. Extremely reluctant to change the long-standing law, the legislature rejected the new constitution. Law-makers began drafting a new anti-American constitution, but the United States forced President Dartiguenave dissolve the legislature, which did not meet again until 1929.

Particularly in 1919 and 1920, rebel uprisings sought to dislodge U.S. influence on the island. The revolts were in part spurred by the heavy-handed practices of the American occupation, which included segregation and enforced chain gangs to build roads and other construction projects. There was brutal suppression, according to eyewitness accounts.

„Military camps have been built throughout the island. The property of natives has been taken for military use. Haitians carrying a gun were for a time shot at sight. Many Haitians not carrying guns were also shot at sight,“ wrote Herbert Seligman in the Nation magazine in 1920. „Machine guns have been turned into crowds of unarmed natives, and United States marines have, by accounts which several of them gave me in casual conversation, not troubled to investigate how many were killed or wounded.“

Dubois cites one notorious image taken by a U.S. marine of the slain Haitian rebel Charlemagne Peralte, strung up naked in a loin cloth. The photo was disseminated across the island as a warning against insurgency, but instead — with its haunting evocation of the crucifixion — became „an icon of resistance.“ 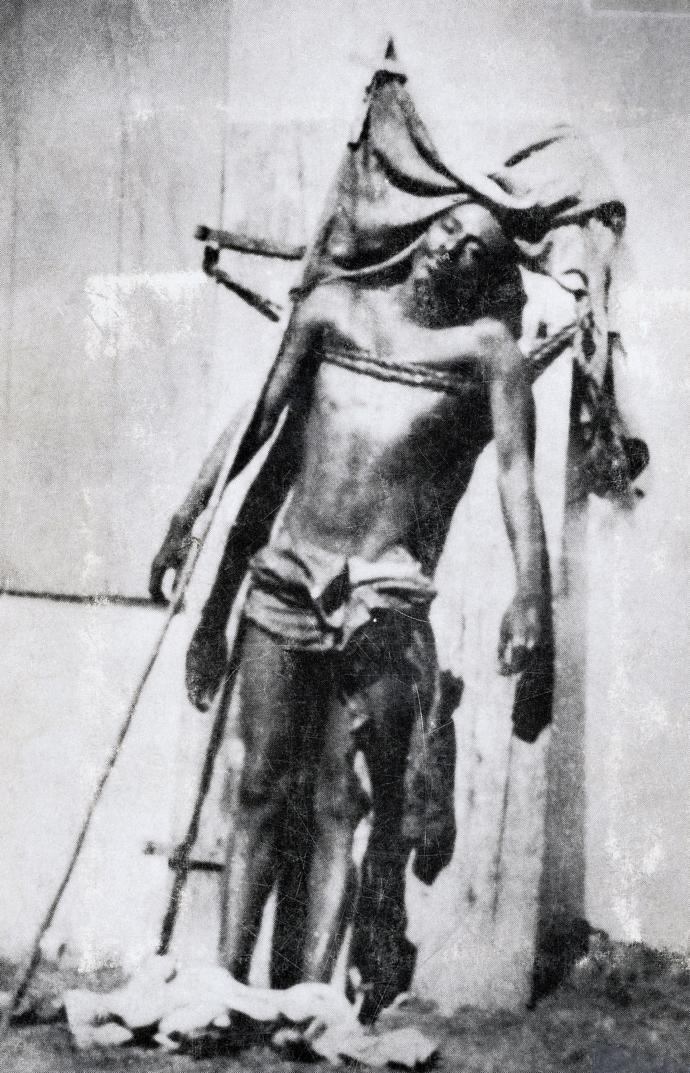 The Haitian-American author Edwidge Dandicat writes further on the memory of the violence:

One of the stories my grandfather’s oldest son, my uncle Joseph, used to tell was of watching a group of young Marines kicking around a man’s decapitated head in an effort to frighten the rebels in their area. There are more stories still. Of the Marines’ boots sounding like Galipot, a fabled three-legged horse, which all children were supposed to fear. Of the black face that the Marines wore to blend in and hide from view. Of the time U.S. Marines assassinated one of the occupation’s most famous fighters, Charlemagne Péralte, and pinned his body to a door, where it was left to rot in the sun for days.

To be sure, the U.S. occupation wasn’t all bloodshed and brutality. Haiti’s infrastructure was considerably improved, its education system revamped, and Port-au-Prince was turned into a teeming metropolitan center. But the lengthy 19-year-period of domination is hardly remembered with fondness.

„The American occupation was a failure,“ said Herold Toussaint, a professor at the State University of Haiti, in an interview with the Miami Herald. „There was stability of [the domestic currency] and they diminished corruption in the public administration. But the objective they had, friendly relations between Haiti and the U.S., didn’t happen.“

As the journalist Jonathan Katz details in his book on Haiti’s long, miserable experience with foreign aid and intervention, the Americans left behind a new template for inequity and misrule.

„After the United States left in 1934, their successors continued bolstering [Port-au-Prince’s] control over rural politics, expropriating peasant land for factories that produced commodities for the United States and stifling dissent using the army the Americans created,“ Katz writes.

In 1933, Smedley Butler, a former general in the U.S. Marine Corps, spoke with uncommon venom about the role his troops played in Haiti and beyond:

I spent thirty-three years and four months in active military service as a member of this country’s most agile military force, the Marine Corps. I served in all commissioned ranks from Second Lieutenant to Major-General. And during that period, I spent most of my time being a high class muscle-man for Big Business, for Wall Street and for the Bankers. In short, I was a racketeer, a gangster for capitalism … I helped make Haiti and Cuba a decent place for the National City Bank boys to collect revenues in. I helped in the raping of half a dozen Central American republics for the benefits of Wall Street.

„During those years, I had, as the boys in the back room would say, a swell racket,“ concluded Butler. „Looking back on it, I feel that I could have given Al Capone a few hints.“

The other assassination that started World War I

Ishaan Tharoor writes about foreign affairs for The Washington Post. He previously was a senior editor at TIME, based first in Hong Kong and later in New York.