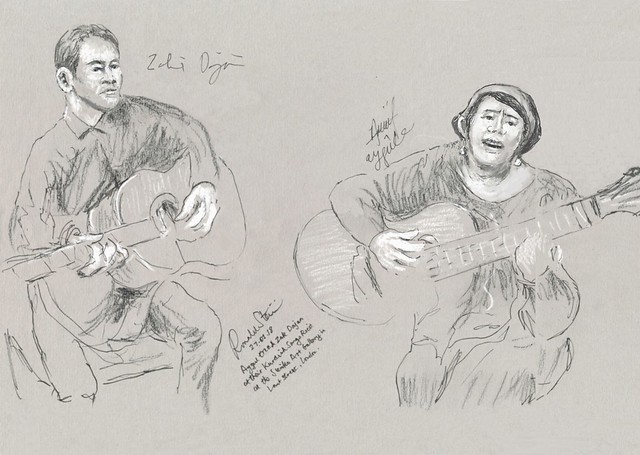 By Professor Hovhanness I. Pilikian

There is a superb photograph on the home-page of http://norkhosq.net/

(A most distinguished multilingual Armenian website hailing from Germany), of the magnificent Joan Baez, the world-famous Protest Song-writer, Anti-war and Civil Rights campaigner, with Miss Aygul Erce, the Kurdish folk-singer performing similarly for her own people, the much genocided Kurds, still being genocided by the modern day Turkish Sultan Erdogan, who incredibly shamelessly brags of what any other ‘modern’ tyrant would be ashamed of as the best mate of Donald Trump’s Zionist America,  that he has already … imprisoned ten thousand people, mostly the cream of his own Turkish population – most tyrants would hang their heads in shame while covering up their crimes, but Mr. Erdogan is an original, bragging about his crimes with pride … one cannot tell if he is mentally ill, or what?

President Erdogan, today, is still attempting (and thanks to the Christian God, failing!) to genocide the Kurds of Afrin, which is not even in Erdogan’s bloody Turkey, but a large city enclave in Northern Syria, home to a substantial Kurdish population.  A month ago, on January 28th (2018), in a most shocking perversion of the geopolitical fact, practicing the old Anglo-American imperialist adage of ‘Speak Peace, to make War’, Erdogan’s Turkish state began the Operation Olive Branch to genocide the Kurds of Syrian Afrin. 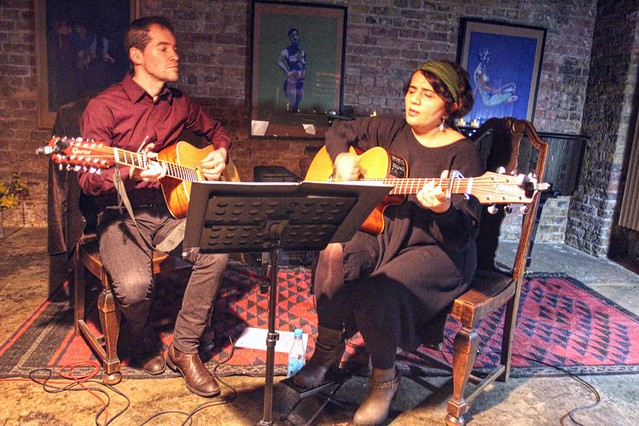 Erdogan’s ancestor, the Red Sultan Hamit – given the blood-sobriquet for killing masses of his Armenian subjects in the 1890’s, and his goslings the Young Turks, in 1915, failed to wipe out the Armenian population of Anatolia, even though the goslings tried very hard and succeeded in murdering 1.5 million Armenians, with help from the … Freemasons of Winston Churchill (their Grandmaster), who in 1915 fired the start-shot of the meticulously British-planned State-genocide of the Armenians with an attack on Gallipoli… Churchill abused the Australian and New Zealand British Empire Anzacs, tasty, plump cannon fodder for the Turks … the half-starved, tinned Baked-Beans fed farting English soldiers wouldn’t do … It was a Middle Eastern Arab rule my father Israel Pilikian knew well – never march behind British soldiers as they farted their way to a battlefield…

In one of the most celebrated music festivals at Woodstock, in 1969 at the peak of Vietnam war-fever, Joan Baez, Janis Joplin and others gave their all to shame the American warmongers.  And by god, the American genocidal State was shamed after 25 years, when Richard Nixon announced the war’s end on Jan 23 in 1973.  It took the American fat-ass general jerks another two years to pull up their gay Calvin Klein semi-pants to run out of the Saigon brothels.

Unfortunately, the end of the Vietnam War also ended the socio-political significance of the Pop-world, stretching back to the beginnings of classical music – Beethoven’s only opera, Fidelio (1805) was a peak of ‘political’ revolutionary music, campaigning for human rights, and political freedom and revolutionary dignity.  Verdi’s masterpiece Aida(1871) was a proto-Marxist anti-racist anti-slavery call for the liberation of the Black people.

The likes of the late David Bowie threw pop-music to a-political dogs, converting it into a hollow, vacuous medium for the bisexual transgender drug-dealing interests.  The only reason Bowie became an international super-star, was because he would sleep with anything, and anyone, man woman, robots … His status is guaranteed as a musician for the future Bottom-Bots! 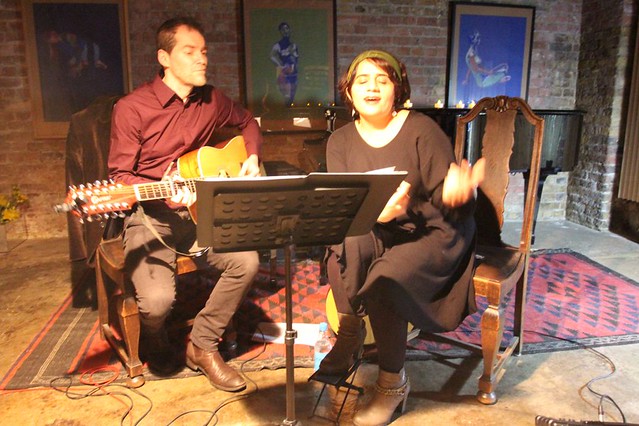 And here comes Miss Aygul Erce, a breeze of mountain fresh-air, with her Guitar accompanist Zak Dajani, a consummate musician himself.  I hope they never split artistically, as they are made for one another.  Miss Erce, with great ease and artistic facility re-creates and invigorates afresh the socio-political significance of the folk world-music.  She is a trained opera-singer, with the fruitiest timbre of a red-wine coloured mezzo-soprano.  Her diction is immaculate, and her musical articulation perfect.

Miss Olga Sienko, Founder and owner of the Gallery Sienko in Borough, South London, had transformed her mini art-centre with perfect acoustics, into an oriental divan of colourful sensuality, with rugs and carpets tastefully ornamenting the environment, she herself reclining on one, engaged in a wonderful Repartee with the performers.

I have known the Polish Miss Sienko (and her English gentleman of a husband, Paul) since the foundation of her exclusively art-Gallery two decades ago, but I never knew she had a rare talent for dramatic repartee. She could tour Poland with Miss Erce and Dajanicompeering their concerts in the most informative, warm, humorous and joyous repartee, topped with audience participation.

Like the great Miss Baez on Vietnam – her unforgettable song narrating the story of an American soldier having to desert his bride to go to war, Miss Aygul narrates of the massacres of her people in Afrin, calling on us to rise in protest and defend the victims. She has another song addressed to a Turkish five star general, saying she has no child to give him to sacrifice … the military idiot should ask his own wife what it takes to bring up a child!!!

When Miss Erce sings, you know that every word she utters, she has lived through … and her heart is in the right places!  She sings of the University Student in Turkey who is arrested and put on trial for merely wearing a Palestinian type Keffiye-scarf.  She sings of the tragedy of forced marriages, a form of Rape!

Her songs are tinged with sweet sadness.  When she was asked by Miss Sienko to sing anentirely … happy song, she happily obliged with an equally beautiful song, which alas sounded as sad as the previous one … I intervened, explaining to the audience that Kurds and Armenians, brother nations, are so frequently tortured and genocided by imperialist powers, that we have difficulty in becoming entirely frivolous and happy … our joy is always mixed with sadness.

We are mountain people, and unconquerable in our mountains … When Armenians came down to the Anatolian plains, they were decimated by the Turkish Grey Wolves acting for the British Civil Service Foxes … The Kurds stayed put in our Mountains, and still master them.  The Armenians must fight together with the Kurds for independence, promised toboth nations by the Treaty of Sèvres (10 August 1920) at the conclusion of the First World War, signed but never actualized by Britain and France, in total betrayal of their cast-iron promises … by the shameless proto-Nazi eugenicist Euro-imperialists, who speak and sign for peace, but act for genocide!

Aygul sang in Armenian one of the masterpieces of Komitas (1869–1935), who was a pioneer of collecting and publishing the Folk-music of Kurds, Armenians, and Arabs, highly acknowledged by the German musicologists of the time, who intervened at the highest level of the Ottoman army (under German High Command) to save the life of Komitas, who had already witnessed the massacres, and lost his mind … holding silence for the rest of his life, spent in a Parisian mental home, where the administration had soft-covered the walls in case Komitas would hit his head on the walls … Komitas died without uttering a single word for twenty years!

In the song, which Aygul sang with such profound love and human warmth, the poet asks the … mountains to heal his wounds with their breeze … the mountains alas do not hear him.  He then addresses his grief to the Clouds, to produce rain to cool down his heartbreak … they too will not listen…

Aygul‘s subtlety of interpretation, and vocal ornamentation of harsh and soft harmonies was the most moving I have heard, and drowned me in tears…

By the end of the concert, the audience mood enhanced by Olga Sienko’s Open-heart comments, stirred some of the Kurdish ladies present to jump up into a

tightly knit Kurdish folk-dance that combined the determination of the peshmergas (= Kurdish freedom fighters) and the sensual allure of their womanhood.

What joy, what sweet grief, what mountaineer’s spiritual power – pure soul incarnate in the folk concert of Aygul Erce and Zak Dajani … what consummate creative artists, true stars, genuine, real, authentic, without an ounce of … modern drug-fuelled and US addicted gay pop-nonsense.

Aygul and Zak may never win the X factor – they should not even try!!

God has blessed their creativity with a heavenly power – they should stay in their classical modern heaven!

Drawing and Photographs by the distinguished British artist Ronald Stein