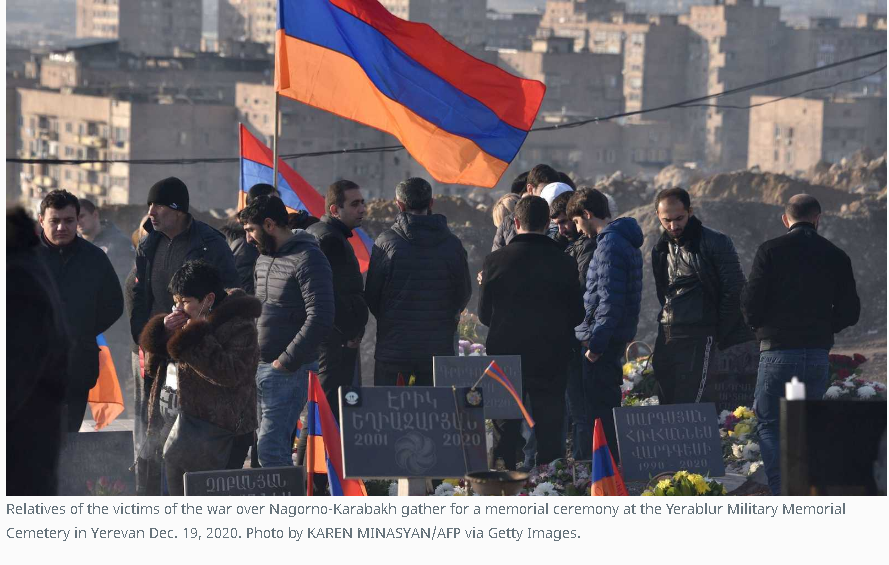 A Turkey analyst reported that Turkey claims to be ready to reconcile with Armenia if Yerevan is willing to „take a step,“ but is that likely?

In her recent Global Opinions column for The Washington Post, prominent Turkish analyst Asli Aydintasbas cited a senior adviser to Turkish President Recep Tayyip Erdogan as having told her that Turkey “is ready to normalize relations with Armenia” after helping its regional ally Azerbaijan defeat the country in a short and bloody war last November to wrest back control of the Nagorno-Karabakh region. “The official now says they could engage with their historic foe and even open the border crossing,” she noted. The unnamed official told her, “The problem for us has always been Armenian occupation of Azeri territory. That’s now resolved. If Armenia is willing to take a step, we are ready.”

The assertion chimes with Turkey’s long-held policy that it would not establish diplomatic relations with its eastern neighbor nor reopen borders with it until it withdrew from Nagorno-Karabakh. The borders were sealed in 1993 to show solidarity with Azerbaijan over Armenia’s occupation of Nagorno-Karabakh, an Armenian-majority enclave that was bestowed by Joseph Stalin to Baku to keep the satellites divided and firmly under Soviet grip.

Critics say Turkey’s apparent magnanimity smacks more of its recent efforts to fix its battered ties with Washington without making the concessions that are actually being demanded of it, namely to get rid of its Russian S-400 missiles immediately. While Aydintasbas agrees that Turkey may be driven by expediency she argues that this is irrelevant. “Sometimes self-serving positions end up producing positive outcomes. This is the first time Turkish officials are formulating a very clear proposal to normalize relations with Armenia,” Aydintasbas told Al-Monitor. “I hope the international community can encourage this.”

The United States and Switzerland were burned once already in 2009, when Turkey signed what was then hailed as historic set of accords they had helped broker with Armenia to forge diplomatic ties and reopen their common borders only to have Erdogan cave to Azerbaijani pressure and walk away.

Aydintasbas insists, however, that Azerbaijan no longer poses a hurdle. “Turkish officials underline that they have spoken to [President Ilham] Aliyev and have his consent,” she said. Cavid Aga, an Ankara-based Azerbaijani analyst and blogger, believes, however, that Azerbaijan would object to any border opening that preceded the opening of a proposed corridor connecting Nakhichevan, an Azerbaijani enclave on the Turkish border, with Azerbaijan proper. “We can’t go to Nakhichevan like in Soviet times. We either have to take a flight, which doesn’t happen due to [COVID-19 related] quarantine, or pass through rugged Iranian territory. So, if Turkey opens borders with Armenia this would seem unjust to us,” he said.

Setting aside such considerations, what of Armenia? Is it willing “to take a step?”

Not any time in the near future, asserted a senior Armenian diplomat speaking on condition that he not be identified by name. The diplomat contended that the Turkish overtures were linked to President Joe Biden’s vows to join a growing number of nations that have formally recognized the mass murder of more than a million Ottoman Armenians in 1915 as a genocide. Turkey has for decades spent tens of millions of dollars on lobbying to avert such recognition and blames the deaths on exposure to the elements, hunger and disease in the midst of conflict. Most credible historians agree that it was a genocide.

“Turkey’s open support to Azerbaijan’s war of aggression in the form of its top military expertise, consultants, weapons as well as recruitment and transportation of Islamic mercenaries [from Syria] resuscitated century-old held Armenian fears of genocide,” the diplomat said. “It is shocking that a country may stick to genocidal intent for a century, without feeling an inch of guilt for what it its predecessors did, [rather than] acknowledge and repent for the crime,” he added.

Such sentiments are widespread. Reconciliation with Turkey would likely deliver a fatal blow to beleaguered Armenian Prime Minister Nikol Pashinyan, who faces popular calls for his resignation over his handling of the war. Jake Hanrahan, creator of the independent conflict journalism platform Popular Front who recently traveled to Nagorno-Karabakh, reckons the Armenian people would be “absolutely disgusted” by any rapprochement with Turkey. “There are literally Turkish flags visible from [the Armenian-held town] Stepanakert [in Nagorno-Karabakh] right now hanging from [Azerbaijan-held] Shushi, a place where Armenians had their heads cut off on camera by Turkish-backed Azerbaijani forces,” he told Al-Monitor. “If the Armenian government decides to do this now, they will lose what scraps of faith they had from the people of Karabakh,” Hanrahan added.

Hanrahan was referring to several gruesome videos that circulated on social media as the war raged on showing Azerbaijani forces decapitating two men believed to be Armenians. They stake the head of one on a pig’s carcass, saying, “This is how we get revenge — by cutting heads.” Amnesty International said footage of the beheadings was authentic. It accused both sides of committing war crimes.

Laurence Broers, Caucasus program director at Chatham House, concurs that amid such bitterness Turkish-Armenian dialogue is hard. “A humiliating defeat in which Turkey played a key role is of course not an enabling context for normalization. Any such process should be just that — a process, built up over time and realized across multiple dimensions — societal, cultural, ideational — not just as a geopolitical tradeoff,” he said.

It was just the sort of process he describes, aimed at healing the wounds of the Armenian genocide, that the globally acclaimed Turkish philanthropist Osman Kavala was determinedly promoting before he was jailed on bogus terrorism charges in October 2017. He is due to appear in court again on Feb. 5. Freeing him would bring Turkey into compliance with the European Court of Human Rights, which has ruled that Kavala’s detention is unlawful. It would also add credence to claims that Turkey is sincere about reaching out to Armenia.

Kavala’s fate is unlikely to sway Armenia even though reconciliation with Turkey would serve it economically — it would help the landlocked nation reduce its dependence on Russia. But Richard Giragossian, director of the Regional Studies Center, a think tank in Yerevan, believes that Armenia may not have much agency in the matter. “Armenia’s now entrenched reluctance may become less of an obstacle and more of a minor inconvenience,” Giragossian said, citing two reasons: “First Turkey may initiate a unilateral effort to reopen the border, threatening to isolate Armenian leaders by forcing them into a self-defeating refusal.”

His second reason, that normalization may come from an agreement between Russia and Turkey that is forced on Armenia, sounds counterintuitive. But Giragossian argues that Russian President Vladimir Putin would view it as an important way to bolster the Eurasian Economic Union by extending its borders to Turkey. “Russian border guards control that border and the Russian-owned Armenian railway network will benefit. For Moscow it’s a further way to isolate Georgia,” he said.

Broers counters that the hard-power approach may deliver swift results but is no guarantee of stability. With Russia’s previous monopoly in the South Caucasus challenged by Ankara’s decisive intervention on the side of Azerbaijan and now largely “contained in the security sphere,” Turkey will need to decide whether it wants to exercise its influence as another hegemon over Armenia or to have a different kind of relationship rooted in soft and economic power. Turkey’s aggressive stance in Syria, Libya and the eastern Mediterranean suggest that it will likely plump for the former. “The whole dynamic of regionalization suggests Turkey is looking for ‘near-abroad theaters in which to project hegemony. Hegemonic power gets you a long way in the South Caucasus, but ultimately also falls victim to regional fracture,” Broers concluded.
Read more: https://www.al-monitor.com/pulse/originals/2021/02/erdogan-turkey-normalize-united-states-azerbaijan.html#ixzz6ldf0AiYb