32 years ago my family and I were hunted. Hunted like animals 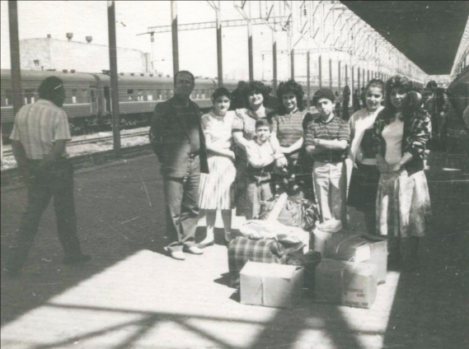 As a child I watched from our balcony as tens of thousands of Azerbaijani men gather in the boulevard, chanting to cleanse the city of Armenians. Absolute fear, my mother grabbing me away from the balcony, turning off the lights. Ethnic killings of Armenians began on February 27, 1988, in the city of Sumgait, just 18 miles away from the capital where we lived. After the rally, the men were given lists, addresses of Armenian neighborhoods, homes and places of employment. Immediately my family went into hiding. I

document our excapefrom this death trap in my book „Liminal, a refugee memoir“

From January 12, 1990, a seven-day pogrom broke out against the Armenians civilian population in Baku. This was organized in advanced by the Azeri government in direct retaliation against the demands of Armenians in Artsakh to secede from Azerbaijian. To be an Armenian in Azerbaijian during this time was a death sentence! Thousands of Armenians brutally tortured, sodomized, burned alive, pregnant women and babies, toddler girls, women and even grandmothers were gang raped as our brothers, fathers, husbands forced to watch. Women forced to dance in the streets naked, then drenched in gasoline and set on fire alive. (Forgive me for such details… we survivors live with these memories) Our loved ones, stabbed, beaten, tortured, raped, thrown off building alive and their bodies mutilated. Over 300,000 Armenians purged overnight out of their homes, grabbing what they can carry fleeing for safety.

This is how my family became refugees, this is the horror we miraculously survived. The images today of refugees hiding, excaping, grabing their children and fleeing to safety bring flashbacks of painful memories. More painful is the realization that 30 years later, once again, U.S., Europe and International community stood silent as Azerbaijan invaded a sovereign Independent Artsakh, waged war, committed crimes against humanity against the Armenian people last year. Silent, while Turkey, a U.S. „ally“ sponsored this invasion, paid ISIS mercenaries to murder Armenian children, families and civilians? Much different from the response to Ukraine. This selective silence is the violence.

1990 after reuniting with my parents in Yerevan
Armenians desperately excape Baku as last trains depart.