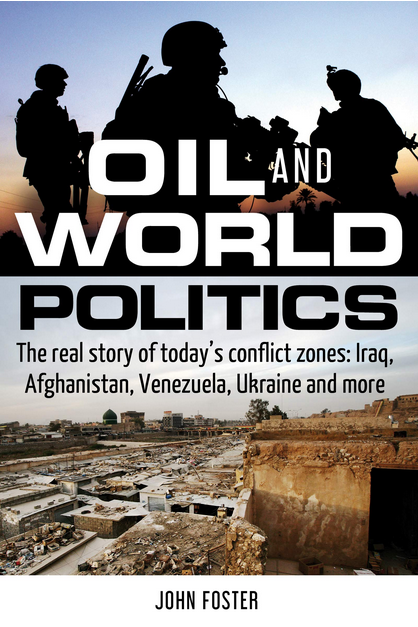 In Oil and World Politics, John Foster argues that there has been a
paradigm shift in the factors which shape, reshape and reinforce global
political and economic relations. Just as spices held sway in ancient
times, Foster observes the overarching influence of hydrocarbon in
today’s global politics. Building upon the scholarship of Francisco
Parra, Paul Sabin, Jianhua Yu and Yichen Dai, Foster goes beyond
the peripherals to show that, irrespective of theoretical paradigm
employed to understand global conflicts, the most significant issue
remains the struggle among state actors to have sustainable and
unrestricted access to crude oil.1

Oil and World Politics consists of ten chapters, each bearing
a plethora of sources for further reading, with several maps,
pictorials and a selected bibliography. Each chapter details critical
epistemological insights over issues commonly within the ambit of
unsubstantiated theories such as the linkages between Western
needs for oil and the removal of leaders, most especially from
third world states, as in the case of Libya. The idea that developed
economies such as the US, Russia, UK, Canada, and France would
prefer most third world economies with quantum oil facilities to
remain underdeveloped is not unconnected to their belief that
should these underdeveloped societies develop, they might lose easy
access to these oil fields. This idea is strongly substantiated given
the unavoidable role of oil (energy) in the trajectories of human
development since the era of the hunter-gather epoch.

Foster uses very recent narratives to show how oil has become a
top priority and „has been a major reason for British, French and U.S.
involvement in the Middle East“ since the twentieth century (p. 16).

Foster begins by showing how oil has been a predetermining factor
in geopolitical strategizing among states. To give a clear illustration
of this, he narrates certain global incidences that rocked the global

political space, such as the Gulf War and its effects on the political
economy of oil across the globe. In Chapter Two, Foster argues that
the invasion of Iraq in 2003 by the George W. Bush administration
was a calculated attempt to gain access to Iraqi oilfields under the
smokescreen of promoting democratisation and human rights. Three
points are emphasized: first, Foster observes that the West has had
an interest in Iraqi oil since the start of the twentieth century. The
second point is the role of the media in the gamut of events that
transpired during the period. Finally, the US invasion triggered
an internal division amongst Iraqis, which to date is still causing
instability within the Persian Gulf region.

In Chapter Three, Foster argues that the protracted conflict that
has ravaged Syria is also situated within this geopolitical context
since the Syrian state itself „is aligned with Iran, Iraq, and Lebanon.
Some analysts refer to a ‚Shia Crescent‘ – a half-moon shaped region
linking people of these four countries“ (p. 59). Of course, Syria’s
position within the eastern end of the Mediterranean Sea makes
it a valuable prize among states, as „some countries would earn
transit revenue from having the pipeline within their country and
other countries would earn nothing“ (p. 60). The Syrian crisis has
lingered for so long because of the struggle between the US and
Russia to gain full control of Syria’s oil and strategic routes. Russian
and American support for the Syrian government and rebel forces,
respectively, could be likened to a neo-Cold War. Supporting the
position of Foster, Erwin Van Veen notes that Syria „is also a (proxy)
battleground for various regional and global power competitions that
have superimposed themselves on the drivers of local conflict.“2 The
ripple effects on the Syrian state are alarming and present many
questions. As Foster asks, „Who would be responsible for paying for
Syria’s reconstruction after the war?“ (p. 84)

Iran’s desire to acquire nuclear weapons and alleged involvement
in terrorism has placed the Persian Gulf state on the blacklist of
the US and her allies. These developments earned Iran and other
countries, such as North Korea and Iraq, inclusion under an „Axis of
Evil“ (p. 85). Similar to his analyses on Iraq, Foster posits that Iran
has persistently had to suffer a series of sanctions, not because any
connections in sponsoring terrorism have been sufficiently proven, but

because its relationships with countries like Russia, Pakistan, and
China exasperates the US’s and other NATO countries‘ oil security
policies, most especially within the Persian Gulf region. Considering
the African continent, Foster illuminates how the struggle for oil
security is caught in the web of persistent conflict between the West
and Libya under Muammar Gaddafi’s regime. As is typical of the
West, the smokescreen remains democratisation and the protection of
human rights. The Responsibility to Protect (R2P) was adopted to
intrude into Libya’s oil reserves, which eventually led to the death of
Gaddafi, thus creating another failed state in Africa.

In Chapter Six, Foster demonstrates the long-standing importance
of transit routes, especially those scattered across various waterways.
Foster stresses how chokepoints and straits have become critical
issues in oil politics, often causing conflict between major oil players,
pirates and terrorist groups. Emphasis, however, is placed on certain
regions such as the Strait of Gibraltar, Strait of Hormuz, and Bab
El-Mandab. Others are the Strait of Malacca, the Suez Canal, and
other strategic coastlines which are important for oil exporting and
importing business across the globe. Foster argues that the spate of
recurring insecurity issues across the various chokepoints and straits
have necessitated the US and NATO to urge for security improvements
in regions such as Djibouti, Somalia, and Yemen, among others. But
at whose expense are these security measures? Foster muses that „the
losers are taxpayers and people who are inevitably collateral damage
in countries being patrolled,“ a majority of whom reside in Africa
and the Middle East (p. 140). Moreover, the case of Afghanistan
and the Tapi Pipeline presents yet another episode of an oil (covert
motive)-counterterrorism (overt) linkage. As he observes, „of course,
the War on Terror was about control – it had nothing to do with
democratization“ (p. 148). In discussing the issues of oil, security and
the US’s interest in Afghanistan, Foster shows that there are many
issues left to address. Foster’s major concerns revolve around the
question of whether or not Afghanistan has the capability to secure
the Tapi Pipeline from potential internal threats that might lead to
further instability as seen in the cases of Iraq and Libya.

The last three chapters (-Eight to Ten) move beyond Africa and
the Middle East as Foster shifts his analysis to Ukraine to support
his argument that oil is central to global politics. The struggle for
the Crimean region holds grave importance for Russia’s international
economic success, given the fact that Russia has limited sea routes

to conduct global trade all year round. Unfortunately, since 2014,
there have been several economic embargoes and political-diplomatic
disputes between the US, Russia, and Ukraine over the acquisition or
dispossession of the Crimea. The conflict between the US and Russia
over the Crimean region presents yet another platform for both the
US and Russia in the twenty-first century to engage in further rounds

of the Cold War.

Chapters Nine and Ten explore several ongoing issues and
theories which could help decipher the recurring tensions in many
quarters of the world, most especially on the question of how and to
what extent does the privatisation of states‘ oil fields affect the lives
of citizens. How have citizens reacted to government insensitivities
towards their plight? In Foster’s view, such actions by governments
have the potential of creating internal conflicts, especially within
those states whose citizens feel that the oil within their geographical
space is not being put to proper use for the enhancement of their day-
to-day lives. Upon the application of Foster’s argument, the Nigerian
Niger Delta Insurgency becomes easier to comprehend. Internal
struggles in states have often attracted embargoes and sanctions
from global governmental organizations. Although these issues could,
according to Foster, be resolved if privatisation in the oil sector is
properly implemented along the conditions of international financial
institutions, which in most cases remains a herculean task to achieve
given the nature of economic structures in most third world economies
where such issues of oil and conflict are rife.

Having spent well over thirty years as an economist with British
Petroleum, John Foster has compiled a detailed text which captures
the real source behind most contemporary conflicts across the world.
His ability to lucidly present his arguments with sufficient data,
mostly from memos and correspondence, and a historical analytical
style makes for easy comprehension. However, given the fact that
the text is a product of work experiences gathered over many years,
it is only logical that Foster omitted certain helpful theoretical
paradigms such as a literature review. That notwithstanding, Oil
and World Politics remains a key text for understanding of oil and
global politics. A well-researched text with sufficient primary sources
helps substantiate the long-purported view that most conflicts across
the globe are connected to the struggle over oil and its variegated
subsidiaries. Oil and World Politics is recommended to those who
wish to expand their knowledge of oil’s role in international conflict.

It is, therefore, safe to conclude that a vast majority of world conflicts
are embedded in the intricacies of states‘ struggles for control over
oilfields, strategic routes and secure access to vital economic interests.
As Foster postulates, until a new variable emerges, oil to a large
extent will continue to determine how conflicts across the globe are
triggered, sustained and possibly resolved.