Bloody News From My Friend 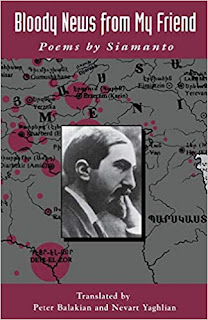 Vahe H Apelian – 30  04  2020
”Bloody News From My Friend”, “Կարմիր Լուրեր Բարեկամէս (1)“ (Garmir Lourer Paregames) is the title of one of Siamanto’s books. It was a fairly well known book title in my days attending Armenian School in Beirut. But, I often wondered why Siamanto gave the book such an odd title. Whenever I inquired about it, the customary explanation given to me amounted to no more than a repetition of the title. It took me a few decades to uncover the answer. It happened midway while I was reading Peter Balakian’s “The Black Dog of Fate”. The book, in my estimation, propelled Peter Balakian to the forefront of the Armenian-American literature, if not American literature as well.
Peter Balakian with Nevart Yaghlian translated Siamanto’s book. In his introduction Balakian elaborated further on the turn of events that led Siamanto to title his book the way he did. Balakian noted that while growing up, he had heard during family conversations that his grandfather, who had died more than a decade before Peter Balakian was born,  had something to do with a very famous book of poetry among the Armenians. Peter Balakian’s grandfather Diran and Adom Yarjanian, the baptismal name of Siamanto, were friends and came from middle- to upper-middle class families from the famous Armenian inhabited town Agn (see the note). Both went to Europe to further their studies. Diran studied medicine in Leipzig (Germany). Adom studied literature in Paris.
Diran returned to Constantinople in 1905 and started practicing medicine. In 1909,  with a group of Armenian physicians, he went to Adana to help the survivors of one of the worst pre-genocide large-scale atrocities and killings perpetrated against the Armenians in the Ottoman Empire. The tragedy is known in Armenian history as the Adana Massacre. Although the atrocities started in the city of Adana in April, they were not confined to that city alone but were spread across the Armenian Cilicia, including Kessab.
Diran Balakian recorded in letters his eyewitness accounts of the atrocities perpetrated against the Armenians.  Unfortunately, the letters are lost. There seem to be two accounts as to how his friend Adom Yarjanian came to know about the atrocities firsthand. In one version, Diran Balakian wrote to his friend Adom. In another version, Diran wrote home to his parents and Adom, being a family friend, read the letters when he visited them. In any event, it is to the news from Peter Balakian’s paternal grandfather that Siamanto alluded to in the titling his book of poetry .
It is apparent that Siamanto wrote “Bloody News From My Friend” on the spur of the moment moved by the atrocities described in the letters his friend Diran Balakian wrote. Simanto had the book published in the same year, 1909, in Constantinople. It appears that the book was also  reprinted in 1910 in Watertown, MA by the “Hairenik” Daily press.

Adom Yarjanian, better known by his pen name Siamanto, was born on August 15, 1878 and lived with his parents in his birthplace Agn until the age 14. It is during these formative years that he showed an unusual talent in writing poetry and was endearingly nicknamed Siamanto. There does not seem to be an explanation as to how the moniker came about and was given to him at that young age and what it actually means. He ended up using it for the rest of his life.
The family moved to Constantinople (Istanbul) in 1891 where Adom continued his studies at the famed Berberian School. He graduated in 1896, during the mass slaughter known in history as the Hamidian Massacres that claimed the lives of up to  250,000 to 300,000 Armenians.  Like many other Armenian intellectuals, Adom Yarjanian also fled the country to Europe fearing persecution.
Siamanto also seemed to have been driven by wanderlust. After finishing his studies at the Sorbonne University in Paris, he moved to Cairo, Zurich, and Geneva where he contributed to „Troshag“, the organ of the Armenian Revolutionary Federation party. He then returned to Constantinople where he became privy to eyewitness accounts of the atrocities against the Armenians in the southeast of the country, wrote and had his famous book of poetry published in 1909. For the next two years he lived in Watertown, Massachusetts as the editor of the „Hairenik“ daily. He then traveled to the Caucasus before returning to Constantinople where he was arrested on the eve of April 24, 1915, along with other prominent Armenian literary and community leaders and was martyred.
Siamanto did not appear to have been distracted by his wanderlust. It might even have helped boost his creative genius. Throughout his travels he always interacted with Armenian intellectuals and worked in Armenian institutions and left behind a rich literary legacy. Along with the other slain figures, Taniel Varoujan, Roupen Sevag, Krikor Zohrab and others, he helped raise Western Armenian literature to its apex following a long dormancy only to be cut short by the Genocide. He stands as one of the towering figures of that renaissance.
“Bloody News From My Friend” comprises of 12 poems. For the very first time, Peter Balakian with Nevart Yaghlian translated the book for English language readers. The second listed poem in the book is titled “The Dance”. It is a description of a dance that will remain forever etched in the Armenian psyche. The following line from the poem is often mentioned: “Human justice, I spit in your face”.
The poem is often recited during commemorations of the Armenian Genocide, although it was written six years before 1915. Armenian painters have depicted „The Dance“ on canvas. Naked Armenian women dancing is the most graphic scene in Atom Egoyan’s “Ararat” film. The most lasting is the life-long etching in the memory of Armenian high school students who were taught the poem and about its celebrated author.
The poem is attached.
The Dance
In a field of cinders where Armenian life was still dying,
a German woman, trying not to cry
told me the horror she witnessed:  „This thing I’m telling you about,
I saw with my own eyes,
Behind my window of hell
I clenched my teeth and watched the town of Bardez turn into a heap of ashes.
The corpses were piled high as trees,
and from the springs, from the streams and the road,
the blood was a stubborn murmur,
and still calls revenge in my ear.
Don’t be afraid; I must tell you what I saw.
so people will understand
the crimes men do to men.
For two days, by the road to the graveyard …
Let the hearts of the world understand,
It was Sunday morning,
the first useless Sunday dawning on the corpses.
From dawn to dusk I had been in my room
with a stabbed woman —
my tears wetting her death —
when I heard from afar
a dark crowd standing in a vineyard
lashing twenty brides and singing filthy songs.
Leaving the half-dead girl on the straw mattress,
I went to the balcony of my window
and the crowd seemed to thicken like a clump of trees
An animal of a man shouted, „You must dance,
dance when our drum beats.“
With fury whips cracked on the flesh of these women.
Hand in hand the brides began their circle dance.
Now, I envied my wounded neighbor
because with a calm snore she cursed
the universe and gave up her soul to the stars …
„Dance,“ they raved,
„dance till you die, infidel beauties
With your flapping tits, dance!
Smile for us. You’re abandoned now,
you’re naked slaves,
so dance like a bunch of fuckin‘ sluts.
We’re hot for your dead bodies.
Twenty graceful brides collapsed.
„Get up,“ the crowed screamed,
brandishing their swords.
Then someone brought a jug of kerosene.
Human justice, I spit in your face.
The brides were anointed.
„Dance,“ they thundered —
„here’s a fragrance you can’t get in Arabia.“
With a torch, they set the naked brides on fire.
And the charred bodies rolled and tumbled to their deaths …
I slammed my shutters,
sat down next to my dead girl
and asked: „How can I dig out my eyes?“
Translated by Peter Balakian and Nevart Yaghlian
(1). ոչ թե «կարմիր լուրեր…», այլ  արյունոտ լուրեր…